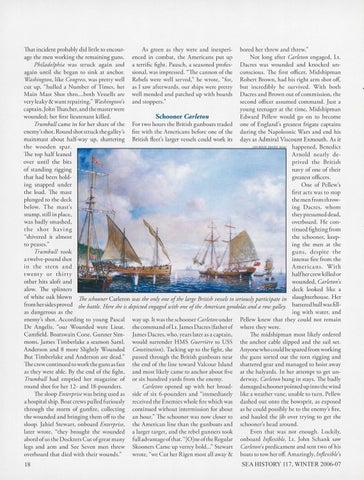 As green as they were and inexperi- bored her th rew and threw.&quot; That incident probably did little to encourage the men working the rem aining guns. enced in combat, the Am ericans put up Not long after Carleton engaged , Lt. Philadelphia was struck again and a terrific fight. Pausch , a seasoned profes- D acres was wounded and knocked unagain until she began to sink at anchor. sional, was impressed . &quot;The cannon of the conscious. The first offi cer, M idshipman Washington, like Congress, was p re tty well Rebels were well served,&quot; he wro te, &quot;for, Robert Brown, had his right arm shot off, cut up, &quot;hulled a N umber of Times, her as I saw afte rwa rds, our ships were pretty bur incredibly he survived. With both Main M as t Shot thro ... .bo th Vessells are well mended and patched up with boards D acres and Brown out of commission, the very leaky &amp; want repairing.&quot; Washington&#39;s and stoppers.&quot; second officer ass umed command. Just a captain, John Thatcher, and the master were yo ung teenager at the time, Midshipman wounded ; her first lieutenant killed. Schooner Carleton Edwa rd Pellew would go on to become Trum bull came in for her sha re of the For two hours the British gunboats traded one of Engla nd &#39;s greatest fri gate captain s enemy&#39;s shot. Round shot struck the galley&#39;s fire with the Americans before one of the during the Napoleonic Wa rs and end his m ainmas t about half-way up, sharrering British fleet&#39;s larger vessels could wo rk its days as Admiral Viscount Exm outh. As it th e w ooden spa r. _....~~~~~~~~~~~~~~~~~~~~~~~~~= co= u R=T= E s~ vE=RN~E= sT~H~ AAs happened, Benedict The top half leaned A rnold nea rly deover until the bits prived the British of standing rigging navy of one of their that had been holdgreatest officers. ing snapped under One of Pellew&#39;s the load. The m as t first acts was to stop plunged to the deck the men from throwbelow. The m as t&#39;s ing D acres, whom stump, still in place, they presumed dead, was badly smashed, overboard. He conth e shot h av in g tinued fighting from &quot;shivered it almost the schooner, keepto peases .&quot; ing the men at the Trum bull took gun s, d es pite the a twelve-pound shot intense fire from the in th e ste rn a nd Am erican s. With twe nt y or thirt y halfher crew killed or other hits aloft and wounded, Carleton&#39;s alow. The splinters deck looked like a of white oak blown The schooner Carleton was the only one of the large British vessels to seriously participate in slaughterhouse. Her from her sides proved the battle. H ere she is depicted engaged with one ofthe American gondolas and a row galley. battered hull was fillas dangerous as the ing with water, and enemy&#39;s sho t. According to yo ung Pascal way up. It was the schooner Carleton under Pellew knew that they could not rem ain D e Angelis, &quot;our Wounded were Lieut. the command of Lt.James D acres (father of where they were. Camfield. Boatswain Cone. G unner Sim- James D acres, who, years later as a captain, The midshipman mos t likely ordered mons. James Timberlake a seaman Sarni. would surrender H MS Guerriere to USS the anchor cable slipped and the sail set. Anderson and 8 mo re Slightly Wounded Constitution). Tacking up to the fight, she Anyone who could be spared from working But Timberlake and Anderson are dead .&quot; passed through the British gunboats near the guns sorted out the torn rigging a nd The crew continued to work the guns as fast the end of the line towa rd Valcour Island shattered gear and m anaged to hoist away as they were able. By the end of the fi ght, and most likely came to anchor about fi ve at the h alya rds. In her attemp t to get unTrumbull had emptied her magazine of or six hundred ya rds fro m the enemy. derway, Carleton hun g in stays. The badly round shot fo r her 12- and 18-pounders. Carleton opened up with her broad- damaged schooner pointed up into the wind The sloop Enterprise was being used as side of six 6-pounders and &quot; immedi ately like a weather vane, un able to turn . Pellew a hospital ship. Boat crews pulled furiously received the Enemi es whole fi re which was dashed out onto the bowsprit, as exposed through the storm of gunfire, collecting continued without interm ission for about as he co uld possibly be to the enemy&#39;s fire, the wo unded and bringing them off to the an hour.&quot; The schooner was now closer to and hauled the jib over crying to get the sloop. Jahiel Stewart, onboard Enterprise, the Am erican line than the gunboats and schooner&#39;s head around. Even that was not enough. Luckily, later wrote, &quot;they brought the wo unded a larger target, and the rebel gunners took abord of us the D ockters C ur of great m a ny full adva ntage of th at. &quot; [OJ neof the Regular onboard Inflexible, Lt. Joh n Sch ank saw legs and arm and See Seven m en threw Skooners Ca me up ver rey bold ... &quot; Stewart Carleton&#39;s predicam ent and sent two of his wro te, &quot;we C ut her Rigen most all away &amp; boats to tow her off. Am azingly, Inflexible&#39;s overboard that died with their wo unds.&quot;