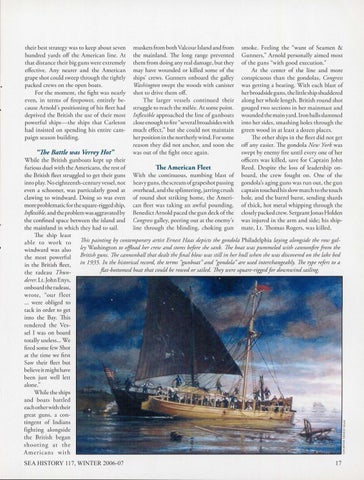 their best strategy was to keep about seven hundred ya rds off the American line. Ar that distance their big guns were extremely effective. Any nearer and the American grape shot could sweep through the rightly packed crews on the open boars . For the moment, the fight was nearly even, in terms of firepower, entirely because Arnold &#39;s positioning of his fleet had deprived the British the use of their most powerful ships-the ships that Carleton had insisted on spending his entire campaign season building.

muskets from both Valcour Island and from the mainland. The long range prevented them from doing any real damage, bur they may have wo unded or killed some of the ships&#39; crews. Gunners onboard the galley Washington swept the woods with canister shot to drive them off. The larger vessels continued t heir struggle to reach the melee. Ar some point. Inflexible approached the line of gunboats close enough to fire &quot;several broadsides with much effect,&quot; bur she could not maintain her position in the norrherlywind. For some reason they did not anchor, and soon she was out of the fight once again.

smoke. Feeling the &quot;want of Seamen &amp; Gunners,&quot; Arnold personally aimed most of the guns &quot;with good execution.&quot; Ar the center of the line and more conspicuous than the gondolas, Congress was getting a beating. With each blas t of her broadside guns, the little ship shuddered along her whole length . British round shot gouged two sections in her mainmast and wou nded the main ya rd. Iron balls slammed into her sides, smashing holes through the green wood in at least a dozen places. Th e other ships in the fleet did not get off any easier. The gondola New York was swept by enemy fire until every one of her officers was killed, save for Captain John Reed. Despite the loss of leadership onboard, the crew fought on. One of the gondola&#39;s aging guns was run out, the gun captain touched his slow match to the touch hole, and the barrel burst, sending shards of thick, hot metal whipping through the closely packed crew. Sergeant Jonas Holden was injured in the arm and side; his shipmate, Lr. Thomas Rogers, was killed.

While the British gunboats kept up their furio us duel with the Americans, the rest of The American Fleet the British fleet struggled to get their guns With the continuous, numbing blast of into play. No eighteenth-century vessel, nor heavy guns, the scream ofgrapeshot passing even a schooner, was particularly good at overhead, and the splintering, jarring crush clawing to wi ndward. Doing so was even of round shot striking home, the A merimore problematic for the square-rigged ship, can fleet was raking an awful pounding. Inflexible, and the problem was aggravated by Benedict Arnold paced the gun deck of the the confined space between the island and Congress galley, peering our at the enemy&#39;s the mainland in which they had to sail. line through the blinding, choking gun The ship least This painting by contemporary artist Ernest Haas depicts the gondola Philadelphia laying alongside the row galab le to work to ley Washington to ojfioad her crew and stores before she sank. The boat was pummeled with cannon.fire from the windward was also British guns. The cannonball that dealt the final blow was still in her hull when she was discovered on the lake bed the most powerful in 1935. In the historical record, the terms &quot;gunboat&quot; and &quot;gondola&quot; are used interchangeably. The type refers to a in the British fleer, flat-bottomed boat that could be rowed or sailed. They were square-rigged for downwind sailing. the radeau Thunderer. Lr.John Enys, on board the radeau, wrote, &quot;o ur fleet ... were obliged to tack in order to get into the Bay. This rendered the Vessel I was on board totally useless ... We fired some few Shor at the rime we first Saw their fleer but believe it might have been just well !err alone.&quot; While the ships and boars barded eachotherwirh their great guns, a contingent of Indians fighting alongside the British began shootin g at the Americans wit h