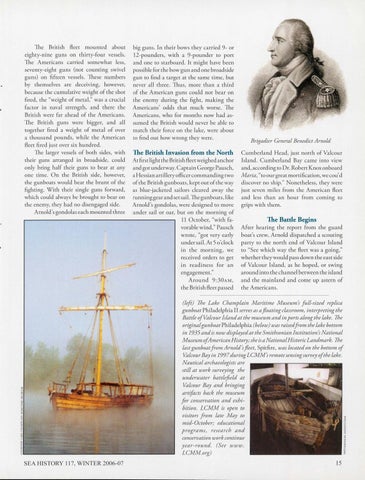 The British fleet mounted about eighty-nine guns on thirty-fo ur vessels. The Americans carried somewhat less, seventy-eight guns (not counting swivel guns) on fifteen vessels. These numbers by themselves are deceiving, however, because the cumulative weight of the shot fired , the &quot;weight of metal,&quot; was a crucial factor in naval strength, and there the British were far ahead of the Americans. The British guns were bigger, and all together fired a weight of metal of over a thousand pounds, while the American fleet fired just over six hundred. The larger vessels of both sides, with their guns arranged in broadside, could only bring half their guns to bear at any one time. On the British side, however, the gunboats would bear the brunt of the fighting. With their single guns forward , which could always be brought to bear on the enemy, they had no disengaged side. Arnold&#39;s gondolas each mounted three

big guns. In their bows they carried 9- or 12-pounders, w ith a 9-pounder to port and one to starboard. Ir might have been possible for the bow gun and one broadside gu n to find a target at the same time, but never all three. Thus, more than a third of the American guns could not bear on the enemy during the fight, making the Americans&#39; odds that much worse. The Americans, who for months now had assu med the Brirish would never be able to match their forc e on the lake, were about to find out how wrong they were.

The British Invasion from the North At first light the British fl eet weighed anchor and got underway. Captain George Pausch, a Hessian artillery officer commanding two of the British gunboats, kept out of the way as blue-jacketed sailors cleared away the running gear and set sail. The gunboats, like Arnold &#39;s gondolas, were designed to move under sail or oar, but on the morning of 11 October, &quot;with favorable wind,&quot; Pausch wrote, &quot;got very early under sail. At 5 o&#39;clock in the morning, we received orders to get in readiness for a n engagement.&quot; Around 9:30AM, the British fleet passed

Brigadier General Benedict Arnold Cumberland Head, just north ofValcour Island. Cumberland Bay came into view and, according to Dr. Robert Knox onboard Maria, &quot; to our great mortification, we cou&#39; d discover no ship.&quot; Nonetheless, they were just seven miles from the American fleet and less than an hour from coming to grips with them.

The Battle Begins Afrer hearing the report from the guard boat&#39;s crew, Arnold dispatched a scouting parry to the north end of Valcour Island to &quot;See which way the fleet was a going,&quot; whether they would pass down the east side of Valcour Island, as he hoped, or swing around into the channel between the island and the mainland and come up astern of the Americans.

(left) The Lake Champlain Maritime Museum&#39;s full-sized replica gunboat Philadelphia II serves as a floating classroom, interpreting the Battle o/Valcour Island at the museum and in ports along the lake. The originalgunboat Philadelph ia (below) was raisedfrom the lake bottom in 1935 and is now displayed at the Smithsonian Institution&#39;s National Museum ofAmerican H istory; she is aNationa!H istoric Landmark. The last gunboat from Arnold&#39;s fleet, Spitfire, was located on the bottom of Valcour Bay in 1997 during LCMM&#39;s remote sensing survey ofthe Lake. Nautical archaeologists are still at work surveying the underwater battlefield at Valcour Bay and bringing artifacts back the museum for conservation and exhibition. LCMM is open to visitors from fate May to mid-October; educational programs, research and conservation work continue year-round. (See www. LCMM.org)