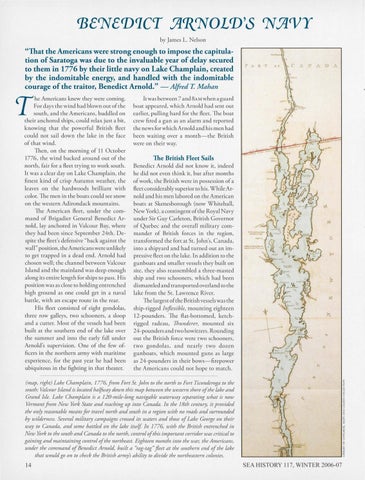 &quot;That the Americans were strong enough to impose the capitulation of Saratoga was due to the invaluable year of delay secured to them in 1776 by their little navy on Lake Champlain, created by the indomitable energy, and handled with the indomitable courage of the traitor, Benedict Arnold.&quot; -Alfred T. Mahan

he Americans knew they were coming. For days the wind had bl ow n out of the south, and the Americans, huddled o n their a nchored ships, could relax just a bit, k nowing that the powerful British fleet could no t sail down the la ke in the face of that w ind. Then, on the morning of 11 October 1776, the wind backed aro und out of the north, fa ir fo r a fleet trying to wo rk south . It was a clea r day on Lake C hamplain, the fin est k ind of crisp Aucu m n weather, the leaves on the hardwoods brilliant with colo r. The m en in the boars could see snow on the wes tern Adi ro ndack mountains. The A merica n fleet, under the comm and of Bri gadier General Benedict A rnold, lay a nchored in Valcour Bay, where they had been since September 24th. Despite the fl eet&#39;s defensive &quot;back against the wall &quot; position, rheAmerica nswere unlikely to get trapped in a dead end. Arnold had chosen well ; the channel between Valcour Island and the m ainland was deep enough along its enti re leng th fo r ships to pass. His position was as close to holding entrenched hi gh gro und as one could get in a naval battle, with an escape route in the rea r. His fl eet consisted of eight go ndolas, three row galleys, two schooners, a sloop and a cutter. Most of the vessels had been built at the southern end of the lake over the summer and into the early fal l under Arnold&#39;s supervisio n. One of the few office rs in the no rthern army with maritime experience, fo r th e pas t yea r he had been ubiq ui to us in the fighting in that theater.

I twas betwee n 7 a nd 8AM when a guard boar appea red, which A rnold had sent out earlier, pulling hard for the fleer. The boar crew fired a gun as an ala rm a nd reported the news forwhi ch A rnold and his m en had been wa itin g over a month- the British were on their way.

The British Fleet Sails Benedict A rnold did not kn ow it, indeed he did not even think it, but after months of wo rk, the British were in possession of a fleet considerably superior to his. W hile Arnold and his men labo red on the American boats at Skenesborough (now W hitehall, New York), a contingent of the Royal Navy under Sir G uy Carleton, British Governor of Quebec and the overall military comm ander of Bri tish fo rces in the region, tra nsformed the fo rt at Sr. John&#39;s, Canada, into a shipya rd a nd had turned out an impress ive fl eet on the lake. In addition to the gunboats and smaller vessels they built on sire, they also reassembled a th ree-m as ted ship and two schooners, which had been dism antled and transported overland to the lake from the Sr. Lawrence River. 1he largest of the Bri tish vessels was the ship-rigged I nflexible, mounting eighteen 12-po unders. The fl at-bo ttom ed, kerchrigged radeau, Thunderer, mounted six 24-pounders and two howitzers. Rounding out the British fo rce we re two schooners, two gondolas, a nd nea rly two do zen gunboats, which mounted guns as large as 24 -pounders in their bows-firepower the A mericans could not hope to m atch .

(map, right) Lake Champlain, 1776, from Fort St. j ohn to the north to Fort Ticonderoga to the south; Valcour Island is located halfway down this map between the western shore ofthe lake and Grand Isle. Lake Champlain is a 12 0-mile-long navigable waterway separating what is now Vermont from New York State and reaching up into Canada. In the 18th century, it p rovided the only reasonable means for travel north and south in a region with no roads and surrounded by wilderness. Several military campaigns crossed its waters and those of Lake George on their way to Canada, and some battled on the lake itself In 1776, with the British entrenched in New York to the south and Canada to the north, control ofthis important corridor was critical to gaining and maintaining control ofthe northeast. Eighteen months into the war, the Americans, under the command of Benedict A rnold, built a &quot;rag-tag&quot; fleet at the southern end of the lake that would go on to check the British army&#39;s ability to divide the northeastern colonies. 14