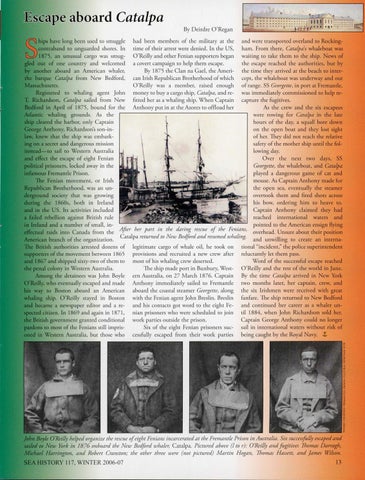 hips have long been used to smuggle had been members of the military at the and were transported overland to Rockingcontraband to unguarded shores. In time of their arrest were denied. In the US, ham. From there, Catalpa's whaleboat was 1875, an unusual cargo was smug- O'Reilly and other Fenian supporters began waiting to rake them to the ship. News of Out of one country and welcomed the escape reached the authorities, but by a covert campaign to help them escape. By 1875 the Clan na Gael, the Ameri- the time they arrived at the beach to interuother aboard an American whaler, barque Catalpa from New Bedford, can Irish Republican Brotherhood of which cept, the whaleboat was underway and out O'Reilly was a member, raised enough of range. SS Georgette, in port at Fremantle, chuserrs. Registered to whaling agen t John money to buy a cargo ship, Catalpa, and re- was imm ediately commissioned to help re!Richardson, Catalpa sailed from New fitted her as a whaling ship. When Captain capture the fugitives . rd in April of 1875, bound for the Anthony put in at the Azores to offload her As the crew and the six escapees tic whaling gro unds. As the ~------------------~ were rowing fo r Catalpa in the late cleared the harbor, only Captain rge Anthony, Richardson's son-inknew that the ship was embarkon a secret and dangero us mission - t o sail to Wes tern Australia effect the escape of eight Fenian 'tical prisoners, locked away in the ous Fremantle Prison.

hours of the day, a squall bore down on the open boa r and they lost sight of her. They did not reach the relative safety of the mo ther ship until the following day. O ver the next rwo days, SS Georgette, the whaleboat, and Catalpa played a dangero us game of cat and mouse. As Captain Anthony made for the open sea, eventually the steamer overtook them and fired shots across und society that was growing his bow, ordering him to heave to. • g the 1860s, both in Ireland in the US. Its activities included Captain Anthony claimed they had reached international waters and · ed rebellion against British rule land and a number of small, inpointed to the American ensign flying After her part in the daring rescue of the Fenians, overhead. Unsure about their position Catalpa returned to New Bedford and resumed whaling. and unwilling to create an internaerican branch of the organization. British authorities arrested dozens of legitimate cargo of whale oil, he rook on tio nal "incident," rhe police superintendent ners of the movement berween 1865 provisions and recruited a new crew after reluctantly let them pass. 1867 and shipped sixty-rwo of them to most of his whaling crew deserted. Word of the successful escape reached The ship made port in Bunbury, West- O 'Reilly and the rest of the world in June. penal colony in Western Australia. Among the detainees was John Boyle ern Australia, on 27 March 1876. Captain By the rime Catalpa arrived in New York · y, who eventually escaped and made Anthony immediately sailed to Fremantle rwo months later, her captain, crew, and way to Boston aboard an American aboard the coastal steamer Georgette, along the six Irishmen were received with great ship. O 'Reilly stayed in Boston with the Fenian age nt John Breslin. Breslin fanfare . The ship returned to New Bedford became a newspaper editor and a re- and his contacts got word to the eight Fe- and continued her career as a whaler uncitizen. In 1869 and again in 187 1, nian prisoners who were scheduled to join til 1884, when John Richardson sold her. Captain George Anthony could no longer British government granted conditional work parties outside the prison. Six of the eight Fenian prisoners suc- sail in in ternational waters without risk of ns to most of the Fenians still imprisin Western Australia, bur those who cessfully escaped from their work parties being caught by the Royal Navy. 1.

Boyle O 'Reilly helped organize the rescue ofeight Fenians incarcerated at the Fremantle Prison in Australia. Six successfolly escaped and to New Yo rk in 1876 onboard the New Bedford whaler, Catalpa. Pictured above (l to r): O'Reilly and fugitives Thomas Darragh, 'Itel Harrington, and Robert Cranston; the other three were (not pictured) Martin Hogan, Thomas Hassett, and James Wilson.