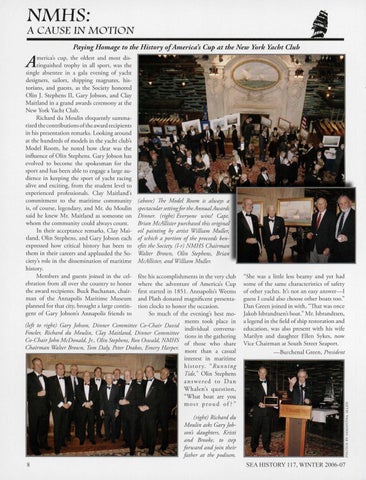 NMHS: A CAUSE IN MOTION Paying Homage to the History ofAmerica&#39;s Cup at the New York Yacht Club

m erica&#39;s cup, the oldest and most distinguished trophy in all sport, was the single absentee in a gala eveni ng of yacht designers, sailors, shipping magnates, historians, and guests, as the Society honored Olin ]. Stephens II, Gary Jobson, and Clay Maitland in a grand awards ceremony at the New York Yacht C lub. Richard du Moulin eloquently summarized the contributions of the award recipients in his presentation remarks. Looking around at the hundreds of models in the yacht club&#39;s Model Room, he noted how clear was the influence of O lin Stephens. Gary Jobson has evolved to become the spokesman for the sport and has been able to engage a large audience in keeping the sport of yacht racing alive and exciting, from the student level to experienced professionals. Clay Maitland&#39;s commitment to the maritime community is, of course, legendary, and Mr. du Moulin said he knew Mr. Maitland as someone on whom the community could always count. In their acceptance remarks, Clay Maitland, Olin Stephens, and Gary Jobson each expressed how critical history has been to them in their careers and applauded the Society&#39;s role in the dissemination of maritime history. Members and guests joined in the celebration from all over the country to honor the award recipients. Buck Buchanan, chairman of the Annapolis Maritime Museum planned for that city, brought a large contingent of Gary Jobson&#39;s Annapolis friends to

(above) The Model Room is always a spectacular setting/or the AnnualAwards Dinner. (right) Everyone wins! Capt. Brian McAllister purchased this original oil painting by artist William Muller, of which a portion of the proceeds benefits the Society. (l-r) NMHS Chairman Walter Brown, Olin Stephens, Brian McAllister, and William Muller.

&quot;She was a little less beamy and yet had some of the same characteristics of safety of other yachts. Ir&#39;s not an easy answer-I guess I could also choose other boats too.&quot; Dan Green joined in with, &quot;That was once Jakob Isbrandtsen&#39;s boat.&quot; Mr. Isbrandtsen, a legend in the field of ship restoration and education, was also present with his wife Marilyn and daughter Ellen Sykes, now Vice Chairman at South Street Seaport. -Burchenal Green, President