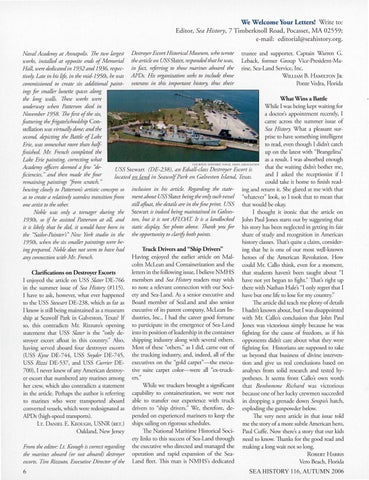 We Welcome Your Letters! Write to: Edi to r, Sea H istory, 7 Timberknoll Road, Pocasset, MA 02559; e-mai l: edi rorial@seahistory.org. Naval Academy at Annapolis. The two largest Destroyer Escort Historical Museum, who wrote trustee and s upporte 1~ Captain Warren G. works, installed at opposite ends of Memorial the article on USS Slater, responded that he was, Leback, fo rmer Group Vice-President-MaHall were dedicated in 1332and 1336, respec- in fact, referring to those marines aboard the rine, Sea-Land Service, Inc. WILLIAM B. HAMILTON JR. tively. Late in his life, in the mid-1350s, he was APDs. His organiz;ation seeks to include those Ponte Vedra, Florida commissioned to create six additional paint- veterans in this important history, thus their ing; for smaller lunette spaces along What Wms a Battle the long walls. These works were While I was being kept waiting for underway when Patterson died in a doctor's appoinrment recently, I November 1358. The first ofthe six, came across the summer issue of featuring the frigatelschoolship ConSea History. W hat a pleasant surstellation was virtually done; and the prise to have something intelligent second, depicting the Battle of Lake to read, even tho ugh I didn't catch Erie, was somewhat more than half up on the latest with "Brangelina'' finished. Mr. French completed the as a result. I was absorbed enough Lake Erie painting, correcting what COURT ES Y HI STOR IC NAVAL S HIPS ASSOCIATIO N tllat the wai ting didn't bother me, Academy officers deemed a few "deUSS Stewart (DE-238), an Edsall-class Destroyer Escort is and I asked the receptionist if I ficiencies, " and then made the four located on land in Seawo/f Park on Galveston Island, Texas. could take it home to finish readremaining paintings 'from scratch, " hewing closely to Patterson's artistic concepts so inclusion in his article. Regarding the state- ing and rem rn it. She glared at me wiili that as to create a relatively seamless transition from ment about USS Slater being the only such vessel "whatever" look, so I took that to mean that still afloat, the details are in the fine print. USS iliar would be okay. one artist to the other. I moughr it ironic that the article on Noble was only a teenager during the Stewart is indeed being maintained in Galves1330s, so if he assisted Patterson at all and ton, but it is not AFLOAT It is a landlocked John Paul Jones starts our by suggesting that it is likely that he did, it would have been in static display. See photo above. Thank you for his story has been neglected in getting its fai r the "Sailor-Painter's" New York studio in the the opportunity to clarifj both points. share of study and recognition in American history classes. Thar's quite a claim , consider1350s, when the six smaller paintings were beTruck Drivers and "Ship D rivers" ing prepared. Noble does not seem to have had ing mat he is one of our most well-known H aving enjoyed the earlier article on Mal- heroes of tl1e American Revolution. H ow any connection with M r. French. Clarifications on Destroyer Escorts I enjoyed the article on USS Slater DE-766 in the summer issue of Sea History (#11 5). I have to ask, however, what ever happened to the USS Stewart D E-238, which as far as I know is still being maintained as a museum ship at Seawolf Park in Galveston, Texas? If so, this contradicts M r. Rizzuto's opening statement that USS Slater is the "only destroyer escort afloat in this country." Also, having served aboard fo ur destroyer escorts (USS Kyne DE-744, USS Snyder D E-745, USS Rizzi DE-537, and USS Currier DE700), I never knew of any American destroyer escort that numbered any marines amo ng her crew, which also contradicts a statement in the article. Perhaps the author is referring to marines who were transported aboard converted vessels, which were redesignared as APDs (high-speed transports). LT. DANIELE. KEOUGH, USN R (RET.) Oakland, New Jersey

From the editor: Lt. Keough is correct regarding the marines aboard (or not aboard) destroyer escorts. Tim Rizzuto, Executive Director of the

colm McLean and Containerization and the letters in the following issue, I believe NM H S members and Sea History readers may wish to note a relevant connect.ion with our Societ.y and Sea-Land. As a senior executive and Board member of SeaLand and also senio r executive of its parent company, McLean Industries, Inc., I had the career good fortune to participate in the emergence of Sea-Land in to its position ofleadershi p in the contain er shipping indusuy along with several others. Most of these "others," as I did, came our of the trucking indusny, and, indeed, all of the executives on the "gold carpet"-tl1e executive suite carpet color-were all "ex-truckers."

While we truckers brought a significant capabilit.y to containerization, we were not able to transfer our experience with truck drivers to "ship drivers." We, therefore, depended on experienced mariners to keep ilie ships sailing on rigorous schedules. The National Maritime H istorical Societ.y links to tl1is success of Sea-Land through the executive who directed and managed ilie operation and rapid expansion of tl1e SeaLand Aeet. Thi s man is NMHS's dedicated

could Mr. Callo think, even fo r a moment, mar students haven't been taught about "I have not yet begun to fight." That's right up mere with Nathan Hale's "I only regret that I have but one life to lose for my country." The article did teach me plent.y of derails I hadn't known about, but I was disappointed with M r. Callo's conclusion mat John Paul Jones was victorious simply because he was fighting fo r me cause of freedom, as if his opponents didn't care about what they were fighting for. H istorians are supposed to take us beyond that business of divine intervention and give us real conclusions based on analyses from solid research and rested hypomeses. Ir seems fro m Callo's own words that Bonhomme Richard was victorious because one of her lucky crewmen succeeded in d ropping a grenade down Serapis's harch, exploding the gunpowder below. The very next article in mat issue told me the story of a more subtle American hero, Paul C uffe. Now mere's a sto ry that our kids need to know. Thanks fo r the good read and making a long wait not so long. ROBERT HARR.rs Vero Beach, Florida