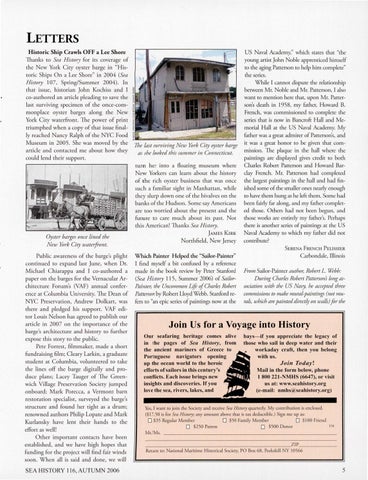 LETTERS Historic Ship Crawls OFF a Lee Shore Thanks to Sea H istory fo r its coverage of the N ew York C ity oyster barge in "Historic Ships On a Lee Sho re" in 2004 (Sea History 107, Spring/Summer 2004). In that iss ue, historian John Kochiss and I co-autho red an article pleading to save the last surviving specimen of the once-commonplace oys ter barges along the New York C ity waterfront. The power of print triumphed when a copy of that issue finally reached N ancy Ralph of the NYC Food Museum in 2005. She was moved by the article and contacted me about how they could lend their support.

The last surviving New York City oyster barge as she looked this summer in Connecticut. turn her into a floating museum where New Yorkers can learn about the history of the rich oyster business that was once such a familiar sight in Manhattan, while they slurp down on e of the bivalves on th e banks of the Hudso n. Some say Am ericans are too wo rried abo ut the present and the future to care much about its pas t. N o t this American! Thanks Sea History.

Oyster barges once lined the New York City waterfront. Public awa reness of the barge's pligh t continued to expand last June, when Dr. Michael C hi arappa and I co-authored a paper on the barges for the Vernacular Architecture Fo rum's (VAF) annual conference at Columbia University. The D ean of NYC Preservatio n, Andrew D olkart, was there and pledged his support. VAF editor Louis N elson has agreed to publish our article in 2007 o n the importance of the barge's architecture and history to furth er expose this story to the publi c. Pete Forrest, filmmaker, made a short fundraising film; Cleary Larkin, a graduate student at Columbia, volunteered to take th e lines off the barge digitally and produce plans; Lacey Tauger of The G reenwich Village Preservation Society jumped onboard; M ark Porecca, a Vermont barn restoration specialist, surveyed the barge's structure and fo und her tight as a drum; renowned authors Philip Lopate and M ark Kurlansky have lent their hands to th e effort as well! Other important contacts have been established, and we have high hopes that fundin g fo r the p roject will find fair winds soon. When all is said and done, we wi ll

US Naval Academy," which states that "the yo ung artist John Noble apprenticed himself to the aging Patterson to help him complete" the series. While I cannot dispute the relationship between Mr. N oble and Mr. Patterson, I also want to mention here that, upon Mr. Patterson's death in 1958, my father, H oward B. French, was commissioned to complete the series that is now in Bancroft Hall and Memorial Hall at the US N aval Academy. My fa ther was a great admirer of Patterson's, and it was a great honor to be given that commission. The plaque in the hall where the paintings are displayed gives credit to both Charles Robert Patterson and H oward Barclay French. Mr. Patterson had completed the largest paintings in the hall and had finished some of the smaller ones nearly enough to have them hw1g as he left them. Some had been fairly far along, and my father completed those. Others had not been begw1, and those works are entirely my fa ther's. Perhaps there is another series of paintings at the U S Naval Academy to which my father djd not contribute? SERENA FRENCH PELISSIER

Which Painter Helped the "Sailor-Painter" I find myself a bit confused by a reference made in the book review by Peter Stanford (Sea History 11 5, SLunmer 2006) of Sailor-

Painter, the Uncommon Life of Charles Robert Patterson by Robert Lloyd Webb. Stanford refers to "an epic series of paintings now at the

From Sailor-Pai nter author, Robert L. Webb: During Charles Robert Patterson's long association with the US Navy, he accepted three commissions to make mural-paintings (not murals, which are painted directly on walls) for the

Join Us for a Voyage into History Our seafaring heritage comes alive in the pages of Sea History, from the ancient mariners of Greece to Portuguese navigators opening up the ocean world to the heroic efforts of sailors in this century's conflicts. Each issue brings new insights and discoveries. IJ you love the sea, rivers, lakes, and

bays-if you appreciate the legacy of those who sail in deep water and their workada y craft, then you belong with us.