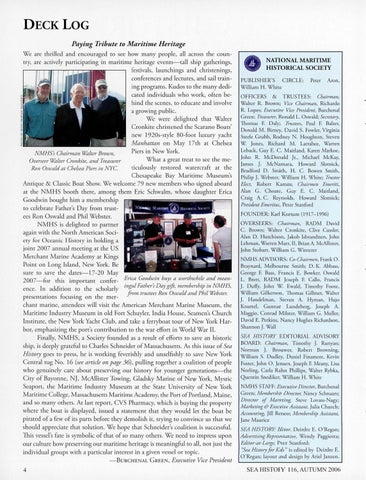 DECK LOG Paying Tribute to Maritime Heritage We are thrilled and encouraged to see how many people, all across the country, are actively participating in maritime heritage events- tall ship gatherings, festivals, launchings and christenings, conferences and lectures, and sail training programs. Kudos to the many dedicated individuals who work, often behind the scenes, to educate and involve a growing public. We were delighted that Walter Cronkite christened the Scarano Boats' new l 920s-style 80-foot luxury yacht Manhattan on May 17th at Chelsea Piers in New York. NMHS's Chairman Walter Brown, What a great treat to see the meOverseer Walter Cronkite, and Treasurer ticulously restored watercraft at the Ron Oswald at Chelsea Piers in NYC Chesapeake Bay Maritime Museum's Antique & Classic Boat Show. We welcome 79 new members who signed aboard at the NMHS booth there, among them Eric Schwalm, whose daughter Erica Goodwin bought him a membership to celebrate Father's Day from trustees Ron Oswald and Phil Webster. NMHS is delighted to partner again with the North American Society for Oceanic History in holding a joint 2007 annual meeting at the US Merchant Marine Academy at Kings Point on Long Island, New York. Be sure to save the dates-17-20 May 2007-for this important confer- Erica Goodwin buys a worthwhile and meaningul Father's Day gift, membership in NMHS, ence. In addition to the scholarly from trustees Ron Oswald and Phil Webster. presentations focusing on the merchant marine, attendees will visit the American Merchant Marine Museum, the Maritime Industry Museum in old Fort Schuyler, India House, Seamen's Church Institute, the New York Yacht Club, and take a ferryboat tour of New York Harbor, emphasizing the port's contribution to the war effort in World War II. Finally, NMHS, a Society founded as a result of efforts to save an historic ship, is deeply grateful to Charles Schneider of Massachusetts. As this issue of Sea H istory goes to press, he is working feverishly and unselfishly to save New York Central tug No. 16 (see article on page 36), pulling together a coalition of people who genuinely care about preserving our history for younger generations-the City of Bayonne, NJ, McAllister Towing, Gladsky Marine of New York, Mystic Seaport, the Maritime Industry Museum at the State University of New York Maritime College, Massachusetts Maritime Academy, the Port of Portland, Maine, and so many others. At last report, CVS Pharmacy, which is buying the property where the boat is displayed, issued a statement that they would let the boat be pirated of a few of its parts before they demolish it, trying to convince us that we should appreciate that solution. We hope that Schneider's coalition is successful. This vessel's fate is symbolic of that of so many others. We need to impress upon our culture how preserving our maritime heritage is meaningful to all, not just the individual groups with a particular interest in a given vessel or topic. -BuRCHENAL GREEN,