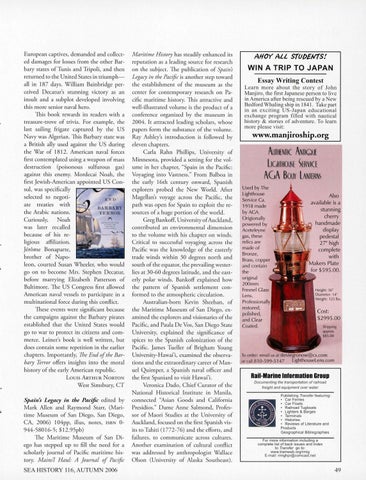 European captives, demanded and collected damages for losses from the other Barbary states of Tunis and Tripoli, and then returned to the United States in triumphall in 187 days . William Bainbridge perceived Decatur's stunning victory as an insult and a subplot developed involving this more senior naval hero. This book rewards its readers with a treas ure- trove of trivia. For example, the las t sailing frigate captured by the US Navy was Algerian. This Barbary state was a British ally used against the US during the War of 1812. American naval forces first contemplated using a weapon of mass des truction (poisonous sulfurous gas) aga inst this enemy. Mordecai Noah , the first Jewish-American appointed US Consul, was specifically selected to negotiate treaties with the Arabic nations. C uriously, Noah was later recalled because of his religious affiliation. Jerome Bonaparte, brother of Napoleon, courted Susan Wheeler, who would go on to beco me Mrs. Stephen D ecatur, befo re marrying Eli zabeth Patterson of Baltimore. The US Congress first allowed American naval vessels to participate in a multinational force during this conflict. These events were significant beca use the campaigns against the Barbary pirates es tablished that the United States wo uld go to war to protect its citizens and com merce. Leiner's book is well written, but does contain some repetition in the ea rlier chapters. Importantly, The End of the Barbary Terror offers insights into the m o ral history of the ea rly American republic. Lours ARTHU R NORTON West Simsbury, CT

Maritime History has steadily enhanced its reputation as a leadin g so urce for research on the subject. The publication of Spain's Legacy in the Pacific is another step toward th e es tablishment of the museum as the center for contemporary research on Pacific maritime history. 1his attractive and well-i llustrated volume is the product of a conference organized by the museum in 2004. It attracted leading scholars, whose papers form rhe substance of the volume. Ray Ashley's introduction is followed by eleven chapters. Carla Rahn Phillips, University of Minnesota, provided a setting for the volume in her chapter, "Spain in the Pacific: Voyaging into Vastness." From Balboa in the early 16th century onward, Spanish explorers probed the New World. After M agellan's voyage across the Pacific, the p ath was open for Spain to exploit th e resources of a huge portion of the world. Greg Banko ff, University ofAuckland, contributed an environmental dimension to the volume with his cha pter on winds. C ritical to successful voyaging across the Pacific was the knowledge of the eas terly trade winds within 30 degrees north and south of the equator, the prevailing westerli es at 30-60 degrees latitude, and th e easterly polar winds. Bankoff explained how the pattern of Spanish settlem ent con formed to the atmospheric circulatio n. Australian-born Kevin Sheehan, of the Maritime Museum of San Diego, examined the explorers and visionaries of the Pacific, and Paula D e Vos, San Diego State U niversity, explained the significance of spices to the Spanish colonization of the Pacific. James Tueller of Brigham Young University-Hawai'i, examined the observations and the extraordinary career of Manuel Quimper, a Spanish naval officer and the first Spaniard to visit Hawai'i. Veronica Dado, Chief C urator of the National Historical Institute in Manila, connected ''Asian Goods and California Presidios." Dame Anne Salmond, Professor of M ao ri Studies at the University of Auckland, focused on the first Spanish visits to Tahiti (1 772-76) and th e effo rts, and failures, to co mmunicate across cultures. Another examination of cultural conflict was addressed by anthropologist Wallace Olson (University of Alaska Southeast) .

Used by The Lighthouse Service Ca. 1918 made by AGA. Origionally powered by Aceteleyne gas, these relics are made of Bronze, Brass, copper and contain the original

To order: em ail us at steviegronow@cs.com or ca ll