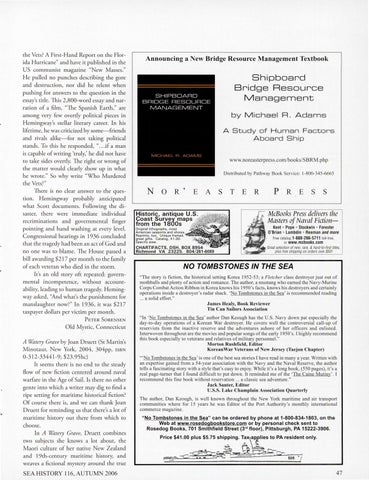 the Vets? A First-Hand Report on the Florida Hurricane" and have it published in the US communist magazine "New Masses." He pulled no punches describing the gore and destruction, nor did he relent when pushing for answers to the question in the essay's tide. This 2,800-word essay and narration of a film , "The Spanish Earth," are among ve ry few overtly political pieces in Hemingway's stellar literary career. In his lifetime, he was criticized by some-friends and rivals alike-for not taking political stands. To this he responded, " .. . if a m an is capable of writing 'truly,' he did not have to take sides overtly. The right or wrong of the matter would clearly show up in what he wrote." So why write "Who Murdered th e Vets?" There is no clear answer to the question. Hemingway probably anticipated what Scott documents. Following the disaster, there were immediate individual recriminations and governmental finger pointing and hand washing at every level. Co ngressional hearings in 1936 concluded that the tragedy had been an act of God and no one was to blame. The House passed a bill awarding $2 17 per month to the family of each vetera n who died in the storm. It's an old story oft repeated: governmental incompetence, without accountability, leading co human tragedy. Hemingway asked, "And what's the punishment for manslaughter now?" In 1936, it was $2 17 taxpayer dollars per victim per month. P ETER SORENSEN

A Wtztery Grave by Joan Druett (St Martin's Minotaur, New York, 2004, 304pp, ISB N 0-3 12-3344 1-9; $23. 95hc) It seems there is no end to the steady flow of new fiction centered around naval warfare in the Age of Sail. Is there no other genre into which a writer may dig to find a ripe setting for maritime historical fi ction ? Of course there is, and we can thank Joan Druett for reminding us that there's a lot of maritime history out there from which to choose. In A Ulatery Grave, Druett combines two subjects she knows a lot about, the Maori culture of her native New Zealand and 19th-century maritime history, and weaves a fiction al mystery around the true

Great selection of new, rare, & hard·to·find titles, plus tree shipping on orders over $50!

NO TOMBSTONES IN THE SEA "Th e story is ficti on, the historical setting Korea 1952-53 ; a Fletcher cl ass destroyer just out of mothball s and pl enty of action and romance. The author, a mustang who earned the Navy-Marine Corps Combat Acti on Ribbon in Korea knows hi s l 950's fac ts, knows hi s destroyers and certainl y operations in side a destroyer's radar shack. 'No Tombstones in the Sea' is recommended rea ding ... a solid effort." James Healy, Book Reviewer T in Ca n Sai lors Assoc ia tion " In 'No Tombstones in the Sea' author Dan Keough has the U.S . Navy down pat especially the day-to-day operati ons of a Korean War destroyer. He covers well th e co ntroversial ca ll -up of reservists from th e in acti ve reserve an d the adventures ashore of her officers and enli sted. Interwoven throu ghout are the movies and popular songs of the early l 95 0's. I hi gh ly reco mm end this book espec iall y to veterans and relatives of military personnel. " Mo r to n Ru shfie ld, Ed itor Korean War Vetera ns of New Jersey (Taejon Chapter) "' No Tombstones in the Sea ' is one of the best sea stori es 1 have read in many a year. Written with an experti se ga ined from a 54-year association with the avy and the Nava l Reserve, the author tell s a fascinating story with a style th at's easy to enjoy. Whil e it's a Jong book, (550 pages) , it 's a real page-turner th at 1 fou nd diffi cult to put down. It reminded me of the ' The Ca ine Mutiny'. I recommend thi s fin e book with out reservation ... a class ic sea ad venture ." Jack Sa uter, Editor U.S.S. Lake Champ lai n Association Quarterly The author, Dan Keough , is well known throughout the New York maritime and air transport communities where fo r 15 years he was Editor of the Port Authority 's monthly internati onal commerce magazine.