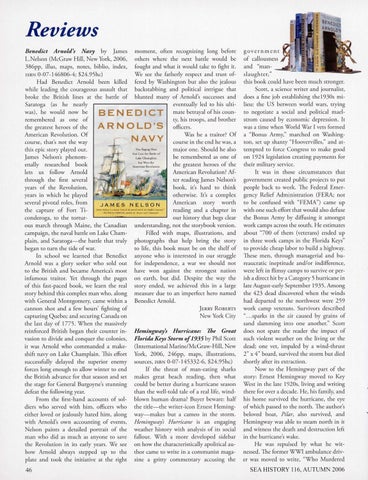 Navy by James mo ment, often recog111zmg long before L.Nelson (McGraw Hill, New York, 2006, others where the next battle would be 386 pp, illus, maps, notes, biblio, index, fou ght and what it wo uld rake to fight it. We see the fa therly respect and trust ofISBN 0-07- 146806-4; $24.95hc) H ad Benedict Arnold been killed fered by Washington bur also rhe jealous while leading the courageous assault that backstabbing and political intrigue char broke rhe British lines at the battle of blunted m any of Arnold's successes and eventually led to his ulriSaratoga (as he nearly was), he would now be BENEDICT mare betrayal of his county, his troops, and brother rem embered as one of the greatest heroes of the ARNOLD'S officers. Was he a traitor? Of American Revolution . Of NAVY course in rhe end he was, a course, that's not the way llie Ragtag Fl«t majo r o ne. Should he also chis epic story played our. thal l..oJt the Baule of be remembered as one of Jam es N elson's phenomLA~e Champlain bu1Won 1he rhe greates t heroes of rhe enally researched book American Revolution? Aflets us follow Arnold ter reading James N elson's through the first several book, it's hard to think years of the Revolution, otherwise. It's a complex years in which he played American story worth several pivo tal roles, from JAMES NELSON 11 reading and a chapter in the capture of Fort Ti·J ..••·s;.~·~:::. ·h·(~;~~~~. : . ~:;~·;',::~,;:;~:~·:~:~::······ our history char begs clear conderoga, to the torturous m arch through Maine, the Canadian understanding, no r the storybook version. Filled with m aps, illustrations, and campaign , the naval battle on Lake Cham plain, and Saratoga-the battle that truly pho tographs char help bring the story to life, chis book must be on the shelf of began to turn the tide of war. In school we learned that Benedict anyo ne who is interested in our struggle Arnold was a glory seeker who sold our for independence, a war we should no r to the British and becam e America's mos t have wo n against rhe strongest natio n infamous traitor. Yet through the pages on earth, bur did . D espite rhe way rhe of chis fast-paced book, we learn the real story ended, we achieved chis in a large story behind chis complex man who, along m easure due to an imperfect hero nam ed with General Montgomery, cam e within a Benedict Arnold. cannon shot and a few ho urs' fighting of J ERRY R OBERTS New York City capturing Quebec and securing Canada on the last day of 1775. When the massively reinforced British began their counter in- Hemingway's Hurricane: The Great vasion to divide and co nquer rh e colo nies, Florida Keys Storm of1935 by Phil Scott it was Arnold who commanded a make- (International Marine/McGraw-Hill, New shift navy on Lake Champlain. This effort York, 2006 , 246pp, m aps, illustrations, successfully delayed the superior enemy sources, ISBN 0-07-1 4533 2-6, $24.95hc) If the threat of man-eating sharks forces long enough to allow winter to end makes great beach reading, then what rhe British advance fo r char season and set rhe stage for General Burgoyne's stunning could be better during a hurricane season than rhe well-told tale of a real life, winddefeat the following year. From rhe fi rs t-hand acco unts of sol- blown human drama? Buyer beware: half diers who served with him, officers who the ride-the writer-icon Ernest H emingeither loved or jealously hared him, along way-m akes bur a cameo in rhe storm . with Arnold's own acco unting of events, H emingway's H urricane is an engaging N elson paints a derailed po rtrait of the weather history with analysis of its social man who did as much as anyo ne to save fallo ut. W ith a more developed sidebar the Revolution in its early years. We see on how rhe characteristically apolitical auhow Arnold always stepped up to the thor came to write in a communist m agaplace and roo k the initiative ar the right zine a gritty comm entary accusing the 46

go ve rnm e nt of callousness and "manslaughter, " this book could have been much stronger. Scott, a science writer and journalist, does a fin e job establishing rhe l 930s milieu: the US berween wo rld wars, trying to negotiate a social and political maelstrom caused by economic depression . It was a time when World War I vets fo rmed a "Bonus Army," marched on Washington , set up shan ty "H oovervilles," and attempted to fo rce Congress to m ake good on 1924 legislation creating payments for their military service. It was in those circumstances that government created public projects to put people back to work. The Federal Emergency Relief Administratio n (FERA; not to be co nfused w ith "FEMA") came up with one such effort that wo uld also defuse the Bonus Army by diffusing it am ongst work camps across the south. H e estimates about "700 of them (veterans) ended up in three wo rk camps in rhe Florida Keys" to provide cheap labo r to build a highway. These men, through managerial and bureaucratic ineprirude and/ or indifference, were left in Aimsy camps to survive or perish a direct hit by a Category 5 hurricane in late August-early September 1935. Among rhe 423 dead discovered when the winds had departed to rhe no rthwes t were 259 work camp veterans. Survivo rs described " . .. sparks in rhe air caused by grains of sand slamming inro one another." Scott does nor spare rhe reader the impact of such violent weather on rhe living or rhe dead; one vet, impaled by a wind-thrust 2" x 4" board, survived rhe srorm bur died shortly after its extraction. N ow to rhe H emingway part of rhe story: Ernest H emingway moved ro Key Wes t in rhe !are 1920s, living and writing there fo r over a decade. H e, hi s family, and his home survived the hurricane, rhe eye of which passed ro rhe north . The author's beloved boar, Pilar, also survived, and H emingway was able to steam north in it and witness rhe death and destruction left in rhe hurricane's wake. H e was repulsed by what he witnessed . The former WWI ambulance driver was moved to write, "Who Murdered SEA HISTORY 116, AUTUMN 2006