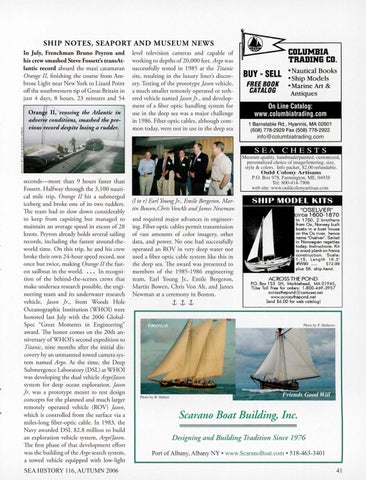 SHIP NOTES, SEAPORT AND MUSEUM NEWS In July, Frenchman Bruno Peyron and his crew smashed Steve Fossett&#39;s transAtlantic record aboard the maxi catamaran Orange II, finishing the course from Ambrose Light near New York to Lizard Point off the southwestern tip of Great Britain in just 4 days, 8 hours, 23 minutes and 54

level television cameras and capable of working to depths of20,000 feet. Argo was successfully tested in 1985 at the Titanic site, resulting in the luxury liner&#39;s discovery. Testing of the prototype Jason vehicle, a much smaller remotely operated or tethered vehicle named Jason Jr., and development of a fiber optic handling system for use in the deep sea was a major challenge in 1986. Fiber optic cables, al though common today, were not in use in the deep sea

seconds-more than 9 hours faster than Fossett. HalfWay through the 3, 100 nautical mile trip, Orange II hit a submerged iceberg and broke one of its two rudders. The team had to slow down considerably to keep from capsizing but managed to maintain an average speed in excess of 28 knots. Peyron already holds several sailing records, including the fastest around-theworld time. On this trip, he and his crew broke their own 24-hour speed record, not once but twice, making Orange II the fastest sailboat in the world . .•. In recognition of the behind-the-scenes crews that make undersea research possible, the engineering team and its underwater research vehicle, Jason Jr., from Woods Hole Oceanographic Institution (WHOI) were honored las t July with the 2006 GlobalSpec &quot;Great Moments in Engineering&quot; award. The honor comes on the 20th anni versary ofWHOI&#39;s second expedition to Titanic, nine months after the initial discovery by an unmanned rowed camera system named Argo. At the time, the D eep Submergence Laboratory (DSL) at WHOI was developing the dual vehicle Argo/jason system fo r deep ocean exploration. Jason Jr. was a prototype meant to test design concepts for the planned and much larger remotely operated vehicle (ROY) Jason, which is controlled from the surface via a miles-long fiber-optic cable. In 1983, the Navy awarded DSL $2.8 million to build an exploration vehicle system, Argo/jason. The first phase of that development effort was the building of the Argo search system , a rowed vehicle equipped with low-light