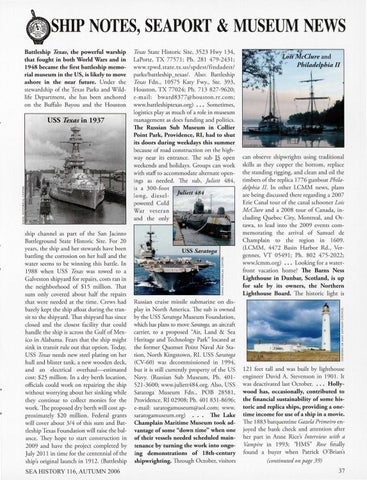 .SHIP NOTES, SEAPORT & MUSEUM NEWS Battleship Texas, the powerful warship that fought in both World Wars and in 1948 became the first battleship memorial museum in the US, is likely to move ashore in the near future. U nder che scewardship of che Texas Parks and W ildlife D epartment, she has been anchored on che Buffalo Bayou and che Houston

ship channel as part of che San Jacinto Banleground Scace Historic Sire. For 20 years, che ship and her scewards have been battling the corrosion on her hull and the water seems to be winning this battle. In 1988 when USS Texas was towed to a Galveston shipyard for repairs, costs ran in the neighborhood of $15 million. That sum only covered about half the repairs that were needed at the time. C rews had barely kept the ship afloat during the transit to the shipyard. That shipyard has since closed and the closest facility that could handle the ship is across the G ulf of Mexico in Alabama. Fears chat the ship might sink in transit rule ouc that option. Today, USS Texas needs new steel placing on her hull and blister tank, a new wooden deck, and an electrical overhaul-estimaced cost: $25 million . In a dry berth location, officials could work on repairing the ship without wo rrying about her sinking while they continue to collect monies fo r the wo rk. The proposed dry berth will cost approximately $20 million. Federal grants will cover about 3/4 of this sum and Battleship Texas Foundation will raise the balance. They hope to start conscruction in 2009 and have the projecc completed by July 2011 in time fo r the centennial of the ship's original launch in 19 12. (Battleship SEA HISTORY 116,AUTUMN2006

can observe shipwrights using traditional skills as they copper the botto m, re place the standing rigging, and clean and oil the timbers of che replica 1776 gunboac Philadelphia II. In other LCM M news, plans are being discussed there regarding a 2007 Erie Canal tour of the canal schooner Lois McClure and a 2008 tour of Canada, including Q uebec C ity, Montreal, and Otcawa, to lead into the 2009 events commemorating the arrival of Samuel de Champlain to che region in 1609. (LCMM, 4472 Basin H arbor Rd., Vergennes, VT 0549 1; Ph. 802 475-2022; www. lcmm. org) .. . Looking fo r a waterfront vacation home? The Barns Ness Lighthouse in Dunbar, Scotland, is up for sale by its owners, the Northern Lighthouse Board. The historic light is

12 1 fee t call and was builc by ligh thouse engineer D avid A. Stevenson in 190 1. It was deactivated las t O ctober. . . . Hollywood has, occasionally, contributed to the financial sustainability of some historic and replica ships, providing a onetime income for use of a ship in a movie. The 1883 barquem ine Gaze/a Primeiro enjoyed the bank check and atcention after her pan in Anne Rice's Interview with a Vampire in 1993; 'HMS" Rose finally fo und a buyer when Patrick O 'Brian's