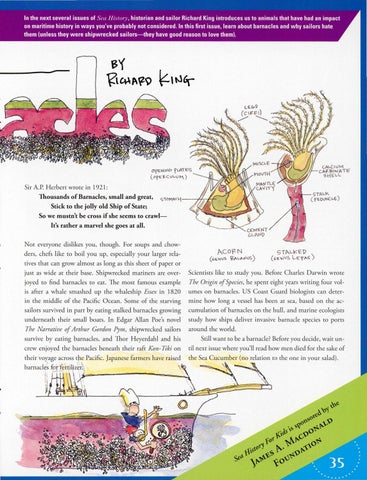 Thousands of Barnacles, small and great, Stick to the jolly old Ship of State; So we mustn't be cross if she seems to crawlIt's rather a marvel she goes at all. Not everyone dislikes yo u, though. For soups and chowders, chefs like

boil you up, especially yo ur larger rela-

tives that can grow almost as long as this sheet of paper or just as wide at their base. Shipwrecked mariners are over-

joyed to find barnacles to eat. The most famous example is after a whale smashed up the whaleship Essex in 1820 in the middle of the Pacific Ocean. Some of the starving

umes on barnacles. US Coast Guard biologists can deter-

The Origin ofSpecies, he spent eight years writing four volmine how long a vessel has been at sea, based on the ac-

cumulation of barnacles on the hull, and marine ecologists

underneath their small boats. In Edgar Allan Poe's novel

survive by eating barnacles, and Thor H eyerdahl and his

Still want to be a barnacle? Before yo u decide, wait un-

crew enjoyed the barnacles beneath their raft Kon-Tiki on

their voyage across t)i.e Pacific. Japanese farmers have raised

the Sea C ucumber (no relation to the one in your salad).