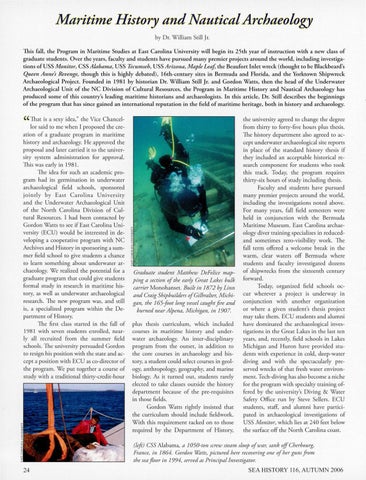 Maritime History and Nautical Archaeology by Dr. W illiam Still Jr. This fall, the Program in Maritime Studies at East Carolina University will begin its 25th year of instruction with a new class of graduate students. Over the years, faculty and students have pursued many premier projects around the world, including investigations of USS Monito r, CSS Alabama, USS Tecumseh, USS Arizona, Maple Leaf the Beaufort Inlet wreck (thought to be Blackbeard&#39;s Queen Annes Revenge, though this is highly debated), 16th-century sites in Bermuda and Florida, and the Yorktown Shipwreck Archaeological Project. Founded in 1981 by historian Dr. William Still Jr. and Gordon Watts, then the head of the Underwater Archaeological Unit of the NC Division of Cultural Resources, the Program in Maritime History and Nautical Archaeology has produced some of this country&#39;s leading maritime historians and archaeologists. In this article, Dr. Still describes the beginnings of the program that has since gained an international reputation in the field of maritime heritage, both in history and archaeology. &quot; That is a sexy idea,&quot; the Vice Chancellor said to me when I proposed the creation of a graduate program in maritime history and archaeology. He approved the proposal and later carried it to the un iversity system administration for ap proval. This was early in 1981. The idea for such an academic program had its germination in underwater archaeological field schools, sponsored jointly by East Caro lin a University and the Underwater Archaeological Unit of the North Carolina Division of Cultural Resources. I had been contacted by Gordon Wa tts to see if East Carolina University (ECU) wo uld be interested in developing a cooperative program with NC Archives and History in sponsoring a summer field school to give students a chance to learn something abo ut underwater archaeology. We realized the potential for a graduate program that could give students formal study in research in maritime history, as well as underwater archaeological research. The new program was, and still is, a specialized program within the Department of History. The first class started in the fal l of 1981 with seven students enrolled, nearly al l recruited from the summer field schools. The university persuaded Gordo n to resign his position with the state and accept a position with ECU as co-director of the program. We put together a course of study with a traditional thirty-credit-hour

Graduate student Matthew DeFelice mapping a section of the early Great Lakes bulk carrier Monohanset. Built in 1872 by Linn and Craig Shipbuilders of Gilbralter, Michigan, the 165-foot long vessel caught fire and burned near Alpena, Michigan, in 1907. plus thesis curriculum, which included courses in maritime history and underwater archaeology. An inter-disciplinary program from the outset, in addition to the core courses in archaeology and history, a student could select courses in geology, anthropology, geography, and marine biology. As it turned out, students rarely elected to take classes outside the history department because of the pre-requisites in those fields. Gordon Watts rightly insisted that the curriculum should include fieldwork. With this requirement tacked on to those required by the D epartment of H istory,

the university agreed to change the degree from thirty to fo rty-five hours plus thesis. The history department also agreed to accept underwater archaeological site reports in place of the standard history thesis if they included an acceptable historical research component for students who rook this track. Today, the program requires thirty-six hours of study including thesis. Faculty and students have pursued many premier projects aro und the world, including the investigations noted above. For many years, fall field semesters were held in conjunction with the Bermuda Maritime Museum. East Carolina archaeology diver training specializes in reducedand sometimes zero-visibility work. The fall term offered a welcome break in the warm, clear waters off Bermuda where students and fac ulty inves tigated dozens of shipw recks from the sixteenth century forward. Today, organized field schools occur wherever a project is underway in conjunction with another organization or where a given student&#39;s thesis project may take them. ECU students and alumni have dominated the archaeological investigations in the Great Lakes in the last ten years, and, recently, field schools in Lakes M ichigan and Huron have provided students with experience in cold, deep-water diving and with the spectacularly preserved wrecks of that fres h water environment. Tech-diving has also become a niche for the program with specialty training offered by the university&#39;s Diving &amp; Water Safety Office run by Steve Sellers. ECU students, staff, and al umni have participated in archaeological investigations of USS Monitor, which lies at 240 feet below the surface off the North Carolina coast.

(left) CSS Alabama, a 1050-ton screw steam sloop of war, sank off Cherbourg, France, in 1864. Gordon watts, pictured here recovering one of her guns from the sea floor in 1994, served as Principal Investigator.