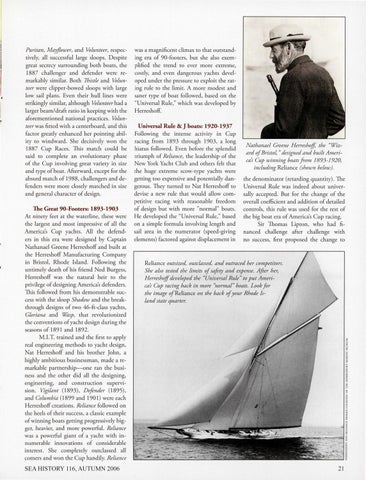 Puritan, Mayflower, and Volunteer, respectively, all successful large sloops. Despite great secrecy surrounding both boats, the 1887 challenger and defender were remarkably similar. Both Thistle and Volunteer were clipper-bowed sloops with large low sail plans. Even their hull lines were strikingly similar, although Volunteer had a larger beam/ draft ratio in keeping with the aforementioned national practices. Volunteer was fitted with a centerboard, and this factor greatly enhanced her pointing ability to windward. She decisively won the 1887 C up Races. This march could be said to complete an evolutionary phase of the Cup involving great variety in size and type of boat. Afterward, except for the abs urd match of 1988, challengers and defenders were more closely matched in size and general character of design.

The Great 90-Footers: 1893-1903 At ninety feet at the waterline, these were the largest and most impressive of all the America's Cup yachts. All the defenders in this era were designed by Captain Nathanael Greene Herreshoff and built at the Herreshoff Manufacturing Company in Bristol, Rhode Island. Following the untimely death of his friend Ned Burgess, Herreshoff was the natural heir to the privilege of designing America's defenders. This followed from his demonstrable success with the sloop Shadow and the breakthrough designs of two 46-ft-class yachts, Gloriana and Wasp, that revolutionized the conventions of yacht design during the seasons of 1891and1892. M.I.T. trained and the first to apply real engineering methods to yacht design, Nat Herreshoff and his brother John, a highly ambitious businessman, made a remarkable partnership-one ran the business and the other did all the designing, engineering, and construction supervision. Vigilant (1893), Defender (1895), and Columbia (1899 and 1901) were each Herreshoff creations. Reliance fo llowed on the heels of their success, a classic example of winning boars getting progressively bigger, heavier, and more powerful. Reliance was a powerful giant of a yacht with innumerable innovations of considerable interest. She completely outclassed all comers and won the Cup handily. Reliance

was a magnificent climax to that outstanding era of 90-footers, but she also exemplified the trend to ever more extreme, costly, and even dangerous yachts developed under the pressure to exploit the rating rule to the limit. A more modest and saner type of boat followed, based on the "Universal Rule," which was developed by Herreshoff.

Universal Rule &J boats: 1920-1937 Following the intense activity in Cup racing from 1893 through 1903, a long hiatus followed. Even before the splendid triumph of Reliance, the leadership of the New York Yach t Club and others felt that the huge extreme scow-type yachts were getting too expensive and potentially dangerous. They turned to Nat Herreshoff to devise a new rule that wo uld allow competitive racing with reasonable freedom of design but with more "normal" boats. He developed the "Universal Rule," based on a simple formu la involving length and sail area in the numerator (speed-giving elements) factored against displacement in

the denominator (retarding quantity). The Universal Rule was indeed abo ut universally accepted. But for the change of the overall coefficient and addition of detailed controls, this rule was used for the rest of the big boat era of America's Cup racing. Sir Thomas Lipton, who had financed challenge after challenge with no success, first proposed the change to

Reliance outsized, outclassed, and outraced her competitors. She also tested the limits of safety and expense. After her, Herreshojf developed the "Universal Rufe" to put America's Cup racing back in more ''normal" boats. Look for the image of Reliance on the back ofyour Rhode Island state quarter.