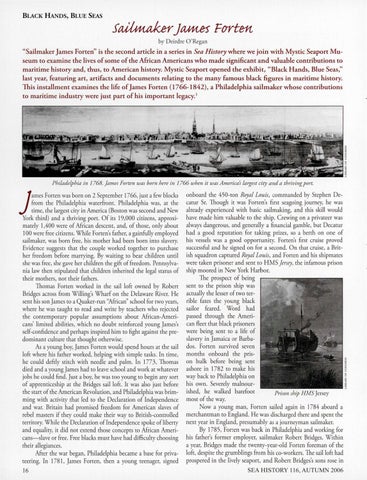 "Sailmaker James Porten" is the second article in a series in Sea History where we join with Mystic Seaport Museum to examine the lives of some of the African Americans who made significant and valuable contributions to maritime history and, thus, to American history. Mystic Seaport opened the exhibit, "Black Hands, Blue Seas," last year, featuring art, artifacts and documents relating to the many famous black figures in maritime history. This installment examines the life ofJames Porten (1766-1842), a Philadelphia sailmaker whose contributions to maritime industry were just part of his important legacy. 1

Philadelphia in 1768. James Porten was born here in 1766 when it was America's largest city and a thriving port.

ames Forren was born on 2 September 1766, just a few blocks from the Philadelphia waterfront. Philadelphia was, at the time, the largest city in America (Boston was second and New York third) and a thriving port. Of its 19 ,000 citizens, approximately 1,400 were of African descent, and, of those, only about 100 were free citizens. While Fonen's father, a gai nfully employed sailmaker, was born free, his mother had been born into slavery. Evidence suggests that the couple worked together to purchase her freedom before marrying. By waiting to bear children until she was free, she gave her children the gift of freedom. Pennsylvania law then stipulated that children inherited the legal status of their mothers, not their fathers . Thomas Forren worked in the sail loft owned by Robert Bridges across from Willing's Wharf on the Delaware River. He sent his son James to a Quaker-run "African" school for two years, where he was taught to read and write by teachers who rejected the contemporary popular ass umptions about African-Americans' limited abilities, which no doubt reinforced yo ung James's self-confidence and perhaps inspired him to fight against the predominant culture that thought otherwise. As a yo ung boy, James Forren would spend hours at the sail loft where his father worked, helping with simple tasks. In time, he could deftly stitch with needle and palm. In 1773, Thomas died and a young James had to leave school and work at whatever jobs he could find. Just a boy, he was too young to begin any sort of apprenticeship at the Bridges sail loft. It was also just before the start of the American Revolution, and Philadelphia was brimming with activity that led to the Declaration of Independence and war. Britain had promised freedom for American slaves of rebel masters if they could make their way to British-controlled territory. While the Declaration oflndependence spoke ofliberty and equality, it did not extend those concepts to African Americans-slave or free. Free blacks must have had difficulty choosing their allegiances. After the war began, Philadelphia became a base for privateering. In 1781 , James Porten, then a you ng teenager, signed

onboard the 450-ton Royal Louis, commanded by Stephen Decamr Sr. Though it was Forten's first seagoing journey, he was already experienced with basic sailmaking, and this skill would have made him valuable to the ship. Crewing on a privateer was always dangerous, and generally a financial gamble, but Decatur had a good reputation for taking prizes, so a berth on one of his vessels was a good opportunity. Forten's first cruise proved successful and he signed on for a second. On that cruise, a British squadron captured Royal Louis, and Porten and his shipmates were taken prisoner and sent to HMS jersey, the infamous prison ship moored in New York Harbor. The prospect of being sent to the prison ship was actually the lesser of two terrible fates the young black sailor feared. Word had passed through the American fleet that black prisoners were being sent to a life of slavery in Jamaica or Barbados. Forren survived seven months onboard the prison hulk before being sent ashore in 1782 to make his way back to Philadelphia on his own. Severely malnourished, he walked barefoot Prison ship HMS Jersey most of the way. Now a yo ung man, Forren sailed again in 1784 aboard a merchantman to England. He was discharged there and spent the next year in England, presumably as a journeyman sailmaker. By 1785, Forren was back in Philadelphia and working for his father's fo rmer employer, sailmaker Robert Bridges. Within a year, Bridges made the twenty-year-old Porten foreman of the loft, despite the grumblings from his co-workers. The sail loft had prospered in the lively seaport, and Robert Bridges's sons rose in