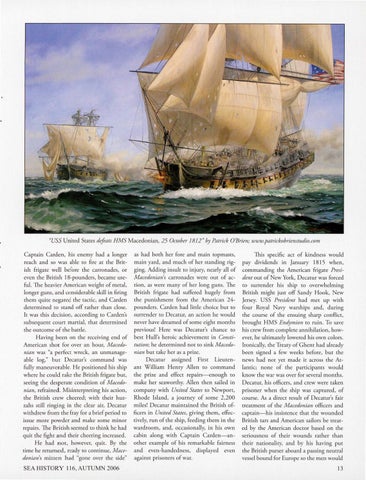 "USS United States defeats HMS Macedonian, 25October1812" by Patrick O'Brien; www.patrickobrienstudio.com Captain Carden, his enemy had a longer reach and so was able to fire at the British frigate well before the carronades, or even the British 18-pounders, became useful. The heavier American weight of metal, longer guns, and considerable skill in firing them quite negated the tactic, and Carden determined to stand off rather than close. It was this decision, according to Carden's subsequent court martial, that determined the outcome of the battle. Having been on the receiving end of American shot for over an hour, Macedonian was "a perfect wreck, an unmanageable log," but Decatur's command was fully maneuverable. He positioned his ship where he could rake the British frigate but, seeing the desperate condition of Macedonian, refrained. Misinterpreting his action, the British crew cheered; with their huzzahs still ringing in the clear air, Decatur withdrew from the fray for a brief period to issue more powder and make some minor repairs. The British seemed to think he had quit the fight and their cheering increased. He had not, however, quit. By the time he returned, ready to continue, Macedonian's mizzen had "gone over the side"

as had both her fore and main topmasts, main yard, and much of her standing rigging. Adding insult to injury, nearly all of Macedonian's carronades were out of action, as were many of her long guns. The British frigate had suffered hugely from the punishment from the American 24pounders. Carden had little choice bur to surrender to Decatur, an action he would never have dreamed of some eight months previous! H ere was Decatur's chance to best Hull's heroic achievement in Constitution; he determined not to sink Macedonian bur rake her as a prize. Decatur assigned First Lieutenant William Henry Allen to command the prize and effect repairs-enough to make her seaworthy. Allen then sailed in company with United States to Newport, Rhode Island, a journey of some 2,200 miles! Decatur maintained the British officers in United States, giving them, effectively, run of the ship, feeding them in the wardroom, and, occasionally, in his own cabin along with Captain Carden-another example of his remarkable fairness and even-handedness, displayed even against prisoners of war.

This specific act of kindness would pay dividends in January 1815 when, commanding the American frigate President out of New York, Decatur was forced to surrender his ship to overwhelming British might just off Sandy Hook, New Jersey. USS President had m et up with fo ur Royal Navy warships and, during the course of the ensuing sharp con8ict, brought HMS Endymion to ruin. To save his crew from complete annihilation, however, he ultimately lowered his own colors. Ironically, the Treaty of Ghent had already been signed a few weeks before, but the news had not yet made it across the Atlantic; none of the participants would know the war was over for several months. Decatur, his officers, and crew were taken prisoner when the ship was captured, of course. As a direct result of Decatur's fair treatment of the Macedonian officers and captain-his insistence that the wounded British tars and American sailors be treated by the American doctor based on the seriousness of their wounds rather than their nationality, and by his having put the British purser aboard a passing neutral vessel bound for Europe so the men would 13