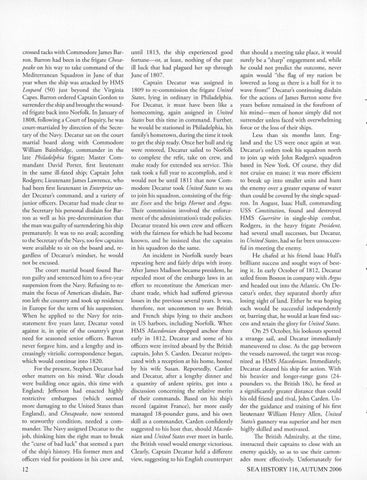 crossed tacks with Commodore James Barron. Barron had been in the frigate Chesap eake on his way to rake command of the Mediterranean Squadron in June of that year when the ship was attacked by HMS Leopard (5 0) just beyond the Virginia Capes. Barron ordered Captain Gordon to surrender the ship and brought the wo unded frigate back into Norfolk. In January of 1808, following a Court oflnquiry, he was court-martialed by direction of the Secretary of the Navy. Decatur sat on the court martial board along with Commodore William Bainbridge, commander in the late Philadelphia fri gate; Master Commandant D avid Porter, first lieutenant in the same ill-fa red ship; Captain John Rodgers; Lieutenant James Lawrence, who had been first lieutenant in Enterprize under D ecatur&#39;s command, and a variety of junior officers. Decatur had made clear to the Secretary his personal disdain for Barron as well as his pre-determination that the man was guil ty of surrendering his ship prematurely. Ir was to no avail; according to the Secretaiy of the Navy, too fe w captains were available to sit on the board and, regardless of Decatur&#39;s mindset, he wo uld not be excused. The court martial board found Barron guilty and sentenced him to a five-year suspension from the Navy. Refusing to remain the focus of American disdain, Barron left the country and rook up residence in Europe for the term of his suspension. When he applied to the Navy for reinstatem ent five years later, Decatur vo ted against it, in spite of the country&#39;s great need for seasoned senior officers. Barron never forgave him, and a lengthy and increasingly vitriolic correspondence began , which wo uld continue into 1820. For the present, Stephen Decatur had other matters on his mind. War clouds were building once again, this time with England; Jefferson had enacted highly resrncnve embargoes (which seemed more damaging to the United States than England) , and Chesapeake, now restored to seaworthy condition, needed a commander. The Navy assigned D ecatur to the job, thinking him the right man to break the &quot;curse of bad luck&quot; that seemed a part of the ship&#39;s history. His former m en and officers vied for positions in his crew and,

until 181 3, the ship experienced good fortune-or, at leas t, nothing of the past ill luck that had plagued her up through June of 1807. Captain Decatur was assigned in 1809 to re-commissio n the frigate United States, lying in ordinary in Philadelphia. For Decatur, it must have been like a homecoming, again assigned in United States but this time in command. Further, he wo uld be stationed in Philadelphia, his family&#39;s hometown, during the time it took to get the ship ready. Once her hull and rig were restored, Decatur sailed to Norfolk to complete the refit, take on crew, and make ready fo r extended sea service. This task took a full year to accomplish, and it would no t be until 1811 that now Commodore Decatur took United States to sea to join his squadron , consisting of the frigate Essex and the brigs Ho rnet and Argus. Their commission involved the enforcement of the administration&#39;s trade policies . D ecatur treated his own crew and officers with the fairness for which he had becom e known, and he insisted that the captains in his squadron do the sam e. An incident in Norfolk surely bears repeating here and fairly drips with irony. After James Madison became president, he repealed most of the embargo laws in an effort to reconstitute the American merchant trade, which had suffered grievous losses in the previous several years. It was, therefore, not uncommon to see British and French ships lying to their anchors in US h arbors, including Norfolk. When HMS Macedonian dropped anchor there early in 18 12, Decatur and some of his officers were invited aboard by the British captain, John S. Carden. D ecatur reciprocated wi th a reception at his home, hosted by his wife Susan. Reportedly, Carden and D ecatur, after a lengthy dinner and a quantity of ardent spirits, got into a discussion concerning the relative merits of their commands. Based on his ship&#39;s record (against France), her more easily m anaged 18-pounder guns, and his own skill as a commander, Carden confidently suggested to his host that, should Macedonian and United States ever meet in battle, the British vessel would emerge victorio us. Clearly, Captain Decatur held a different view, suggesting to his English counterpart

that should a meeting take place, it would surely be a &quot;sharp&quot; engagement and, while he could no t predict the outcome, never again would &quot;the flag of my nation be lowered as long as there is a hull for it to wave from! &quot; Decatur&#39;s continuing disdain for the actions of James Barron some five years before remained in the forefront of his mind-men of honor simply did not surrender unless faced with overwhelming force or the loss of their ships. Less than six months later, England and the US were once again at war. Decatur&#39;s orders rook his squadron north to join up with John Rodgers&#39;s squadron based in New York. Of course, they did not cruise en masse; it was more efficient to break up into smaller units and hunt the enemy over a greater expanse of water than could be covered by the single squadron. In August, Isaac Hull, commanding USS Constitution, found and destroyed HMS Guerriere in single-ship combat. Rodgers, in the heavy frigate President, had several small successes, but Decatur, in United States, had so far been unsuccessful in meeting the enemy. H e chafed at his friend Isaac Hull&#39;s brilliant success and sought ways of besting it. In early October of 1812, Decatur sailed from Boston in company with A rgus and h eaded out into the Atlantic. On D ecatur&#39;s order, they separated shortly after losing sight of land. Either he was hoping each would be successful independently or, barring that, he would at least find success and retain the glory for United States. On 25 O ctober, his lookouts spotted a strange sail, and Decatur immediately maneuvered to close. As the gap between the vessels narrowed, the target was recognized as HMS Macedonian. Immediately, D ecatur cleared his ship for action . With his heavier and longer-range guns (24pounders vs . the British 18s), he fired at a significantly greater distance than could his old friend and rival, John Carden. Under the guidance and training of his first lieutenant William Henry Allen, United Stat1S&#39;s gunnery was superior and her men higHy skilled and motivated. The British Admiralty, at the time, inmucted their captains to close with an enemy quickly, so as to use their carronades more effectively. U nfortunately for SEA HISTORY 116, AUTUMN 2006