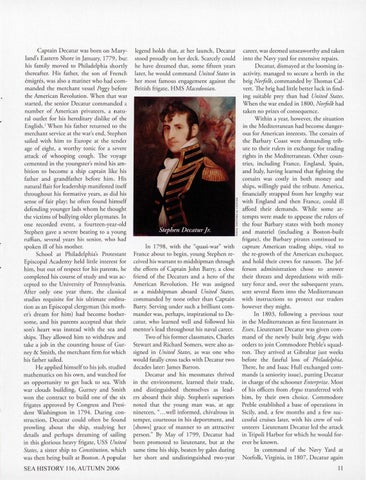 Captain Decatur was born on Mary- legend holds that, at her launch, Decatur land&#39;s Eastern Shore in January, 1779, bu t stood proudly on her deck. Scarcely could his family moved to Philadelphia shortly he have dream ed that, some fifteen years thereafter. His father, the son of French later, he would command United States in emigres, was also a mariner who had com- her most famous engagem ent against the manded the merchant vessel Peggy before British frigate, HMS Macedonian . the American Revolution. When that war started, the senior Decatur commanded a number of American privateers, a natural outlet for his hereditary dislike of the English. 1 When his father returned to the merchant service at the war&#39;s end, Stephen sailed with him to Europe at the tender age of eight, a worthy tonic for a severe attack of whooping cough. The voyage cemented in the yo ungster&#39;s mind his ambition to become a ship captain like his father and grandfather before him. His natural flair for leadership manifested itself throughout his formative years, as did his sense of fair play; he often found himself defending yo unger lads whom he thought the victims of bullying older playmates. In one recorded event, a fourteen-year-old Stephen gave a severe beating to a yo ung ruffian , several years his senior, who had In 1798, with the &quot;quasi-war&quot; with spoken ill of his mother. School at Philadelphia&#39;s Protestant France about to begin , yo ung Stephen reEpiscopal Academy held little interest for ceived his warrant to midshipman through him, but out of respect for his parents, he the efforts of Captain John Barry, a close completed his course of study and was ac- fri end of the Decaturs and a hero of the cepted to the University of Pennsylvania. American Revolution. He was assigned After only one year there, the classical as a midshipman aboard United States, studies requisite for his ultimate ordina- commanded by none other than Captain tion as an Episcopal clergyman (his moth- Barry. Serving under such a brilliant comer&#39;s dream for him) had become bother- mander was, perhaps, inspirational to Desome, and his parents accepted that their catur, who learned well and fo llowed his so n&#39;s heart was instead with the sea and mentor&#39;s lead throughout his naval career. Two of his former classmates, Charles ships. They allowed him to withdraw and take a job in the counting house of Gur- Stewart and Richard Somers, were also asney &amp; Smith, the merchant firm for w hich signed in United States, as was one who wo uld fatally cross tacks with Decatur two his father sailed. He applied himself to his job, studied decades later: James Barron. Decatur and his messm ates thrived mathematics on his own, and watched for an opportunity to get back to sea. With in the environment, learned their trade, war clouds building, Gurney and Smith and distinguished themselves as leadwon the contract to build one of the six ers aboard their ship. Stephen&#39;s superiors frigates approved by Congress and Presi- noted that the yo ung man was, at age dent Washington in 1794. During con- nineteen, &quot; ... well informed, chivalrous in struction, Decatur could often be found temper, courteous in his deportment, and prowling about the ship, studying her [shows] grace of manner to an attractive derails and perhaps dreaming of sailing person.&quot; By May of 1799, Decatur had in this glorious heavy frigate, USS United been promoted to lieutenant, but at the States, a sister ship to Constitution, which same time his ship, beaten by gales during was then being built at Boston. A popular her short and undistinguished two-year

career, was deemed unseaworthy and taken into the Navy yard for extensive repairs. Decatur, dismayed at the looming inactivity, m anaged to secure a berth in the brig Norfolk, commanded by Thomas Calvert. The brig had little better luck in find ing suitable prey than had United States. When the war ended in 1800, Norfolk had taken no prizes of consequence. Within a year, however, the situation in the Mediterranean had become dangerous for American imerests. The corsairs of the Barbary Coast were demanding tribute to their rulers in exchange for trading rights in the Mediterranean. Other countries, including France, England, Spain, and Italy, having learned that fighting the corsairs was costly in both money and ships, willingly paid the tribute. America, financially strapped from her lengthy war with England and then France, could ill afford their demands. While some attempts were made to appease the rulers of the four Barbary states with both money and materiel (including a Boston-built frigate) , the Barbary pirates continued co capture American trading ships, vital to the re-growth of the American exchequer, and hold their crews for ransom. The Jefferson administration chose to answer their threats and depredations with military force and, over the subsequem years, sent several fleets into the Mediterranean with instructions to protect our trad ers however they might. In 1803, fo llowing a previous tour in the Mediterranean as first lieuten ant in Essex, Lieutenant Decatur was given command of the newly built brig Argus with orders to join Commodore Preble&#39;s squadron. They arrived at Gibraltar just weeks before the fateful loss of Philadelphia. There, he and Isaac Hull exchanged commands (a seniority issue) , putting Decatur in charge of the schooner Enterprize. Most of his officers from Argus transferred with him, by their own choice. Commodore Preble established a base of operations in Sici ly, and, a few months and a few successful cruises later, with his crew of volunteers Lieutenant Decatur led the attack in Tripoli Harbor for which he wo uld forever be known. In command of the Navy Yard at Norfolk, Virginia, in 1807, Decatur again 11