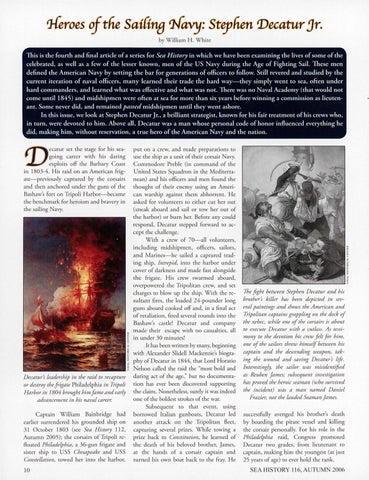 This is the fourth and final article of a series for Sea History in which we have been examining the lives of some of the celebrated, as well as a few of the lesser known, men of the US Navy during the Age of Fighting Sail. These men defined the American Navy by setting the bar for generations of officers to follow. Still revered and studied by the current iteration of naval officers, many learned their trade the hard way-they simply went to sea, often under hard commanders, and learned what was effective and what was not. There was no Naval Academy (that would not come until 1845) and midshipmen were often at sea for more than six years before winning a commission as lieutenant. Some never did, and remained passed midshipmen until they went ashore. In this issue, we look at Stephen Decatur Jr., a brilliant strategist, known for his fair treatment of his crews who, in turn, were devoted to him. Above all, Decatur was a man whose personal code of honor influenced everything he did, making him, without reservation, a true hero of the American Navy and the nation.

ecatur set the stage for hi s seagoing career with his daring exploits off the Barbary Coast in 1803-4. His raid on an American fri gate-previously captured by the co rsairs and then anchored under the guns of the Bashaw's fort on Tripoli Harbor-became the benchmark for heroism and brave ry in the sailing Navy.

Decatur's leadership in the raid to recapture or destroy the frigate Philadelphia in Tripoli Harbor in 1804 brought him fame and early advancement in his naval career. Captain William Bainbridge had earlier surrendered his grounded ship on 3 1 October 1803 (see Sea H istory 11 2, Autumn 2005); the corsairs ofTripoli refloared Philadelphia, a 36-gun frigate and sister ship to USS Chesapeake and USS Constellation, rowed her into the harbor, 10

put on a crew, and made preparations to use the ship as a unit of their corsair Navy. Co mmodore Preble (in command of the United States Squadron in the Mediterranean) and his officers and men found the th o ught of their enemy using an American warship against them abhorrent. He asked for volunteers to either cut her out (sn eak aboard and sail or row her out of the harbor) or burn her. Before any could respond , Decatur stepped forward to accept the challenge. With a crew of 70- all volunteers, including midshipmen, officers, sailors, and Marines-he sailed a cap tured trading ship, Intrepid, into the harbor under cover of darkness and m ade fast alongside the frigate. His crew swarmed aboard, overpowered the Tripolitan crew, and set charges to blow up the ship. W ith the resultant fires, the loaded 24-pounder long g uns aboard cooked off and, in a final act of retaliation , fired several rounds into the Bashaw's cas tle! D ecatur and company m ade their escape with no casualties, all in under 30 minutes! Ir has been written by many, beginning with Alexander Slidell Mackenzie's biography of Decatur in 1844, that Lord Horatio Nelson called the raid the "most bold and daring act of the age," but no documentation has ever been discovered supporting the claim. No netheless, surely it was indeed o ne of the boldest strokes of the war. Subsequent to that event, using borrowed Italian gunboats, Decatur led an o ther attack on the Tripoli ran fleet, capturing several prizes. W hil e rowi ng a prize back to Constitution, he learned of the death of his beloved broth er, James, at the hands of a co rsair captai n and turned his own boat back to the fray. H e

The fight between Stephen D ecatur and his brother's killer has been depicted in several paintings and shows the American and Tripolitan captains grappling on the deck of the xebec, while one of the corsairs is about to execute Decatur with a cutlass. As testimony to the devotion his crew felt for him, one of the sailors threw himself between his captain and the descending weapon, taking the wound and saving Decatur's life. Interestingly, the sailor was misidentified as Reuben James; subsequent investigation has proved the heroic seaman (who survived the incident) was a man named Daniel Frazier, not the Lauded Seaman James. successfully avenged his brother's death by boarding the pirate vessel and killin g the corsair personally. For his role in the Philadelphia raid , C ongress promo ted D ecatur two grades, from lieutenant to captain , m aki ng him the yo ungest (at just 25 years of age) to ever hold the rank.