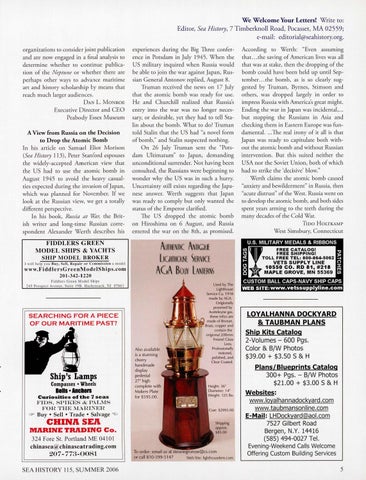 We Welcome Your Letters! Write to: Editor, Sea History, 7 T imberknoll Road, Pocasset, MA 02559; e-mail: editorial@seahisrory.org. organizations w consider joint publication and are now engaged in a final analysis w determine whether w conti nue publication of the Neptune o r whether there are perhaps other ways to advance maritime art and hisrory scholarship by means that reach much larger audiences. DAN

A View from Russia on the Decision to Drop the Atomic Bomb In his article on Samuel Eliot Morison (Sea History 11 3), Peter Stanfo rd espouses the widely-accepted American view that the US had w use the aromic bo mb in August 1945 to avoid the heavy casualties expected during the invasion of]apan, which was planned for November. If we look at the Russian view, we get a rotally different perspective. In his book, Russia at Wcir, the British writer and long-time Russian correspondent Alexander Werth describes his

experiences during the Big Three conference in Potsdam in July 1945 . W hen the US military inquired when Russia wo uld be able w join the war against Japan , Russian General Anronov replied, August 8. Truman received the news on 17 July that the aromic bomb was ready for use. He and Churchill realized that Russia's entry inro the war was no longer necessary, or desirable, yet they had w tell Stalin about the bomb. What w do? Truman told Stalin that the US had "a novel form of bomb," and Stalin suspected nothin g. On 26 July Truman sent the "Potsdam Ultimatum" to Japan , dem anding unconditional surrender. Not having been consulted, the Russians were beginning w wo nder why the US was in such a hurry. Uncertain ty still exists regarding the Japanese answer. Werth suggests that Japan was ready w comply but only wanted the status of the Emperor clarified. The US dropped the aromic bomb on Hiroshima on 6 August, and Russia entered the war on the 8th, as promised.

Used by The Lighthouse Service Ca. 1918 made by AGA. O rigionally powered by Aceteleyne gas,

SEARCHING FOR A PIECE OF OUR MARITIME PAST?

these relics are made of Bronze, a Brass, copper and

order: e mail us at steve1egronow@cs.com

Curiosities of the 7 seas

According to Werth: "Even ass um ing that. .. the saving of American lives was all that was at stake, then the dropping of the bomb could have been held up until September. .. the bomb, as is so clearly suggested by Truman, Byrnes, Stimson and others, was dropped largely in order to impress Russia with America's great might. Ending the war in Japan was incidental, ... but stopping the Russians in Asia and checking them in Eastern Europe was fundam ental. ... The real irony of it all is that Japan was ready to capitulate both without the atomic bomb and without Russian intervention . But this suited neither the USA nor the Soviet Union, both of which had to strike the 'decisive' blow." Werth claims the atomic bomb caused "anxiety and bewilderm ent" in Russia, then "acute distrust" of the West. Russia went on to develop the atomic bomb, and both sides spent years arming to the teeth during the many decades of the Cold War.