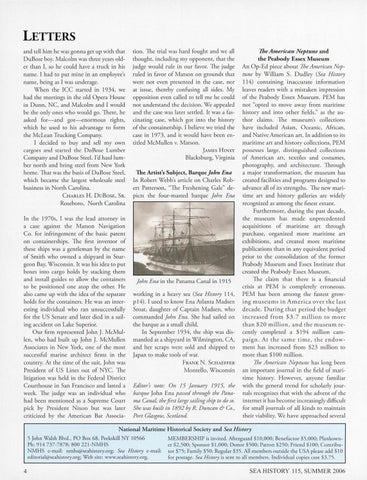 LETTERS and rell him he was gonna ger up wirh rhar DuBose boy. M alcolm was rhree years older rhan I, so he could have a truck in his nam e. I had to pur mine in an employee's name, being as I was underage. When rhe ICC srarted in 1934, we had rhe m eerings in rhe old Opera House in Dunn , NC, and M alcolm and I would be rhe only ones who would go. There, he asked for-and gar-enormous righrs, which he used to his advantage to form the M cLean Truckin g Company. I decided to buy and sell my own ca rgoes and starred rhe DuBose Lumber C ompany and DuBose Sreel. I'd haul lumber north and bring steel from New York home. That was the basis of DuBose Steel, which becam e the largest wholesale steel business in No rth Carolina. CHARLES H. D u BosE, SR. Roseboro, North Carolina In the 1970s, I was the lead atrorney in a case against the M atson Navigation Co. fo r infringement of the basic patent o n containerships. The first inventor of rhese ships was a gentleman by the nam e of Smith who owned a shipyard in Sturgeo n Bay, W isconsin. Ir was his idea to put boxes into cargo holds by stacking them and install guides to allow the co ntainers to be positioned one atop the o ther. H e also cam e up with the idea of the separate holds fo r the containers. H e was an interesting individual who ran unsuccessfully for the US Senate and later died in a sailing accident on Lake Superior. O ur firm represented John J. M cMullen, who had built up John J. M cMullen Associates in New York, one of the most successful marine architect firms in rhe country. At the time of the suit, John was President of US Lines out of N YC. Th e litigation was held in the Federal Distri ct Courthouse in San Francisco and las ted a week. The judge was an individual who had been menti oned as a Supreme Cour r pick by President Nixo n bur was larer criticized by the American Bar Associa-

tio n. The trial was hard fo ught and we all thought, including my opponent, rhat the judge would rule in our favo r. The judge ruled in favor of M arson on grounds that were not even presented in the case, nor at issue, thereby confusing all sides. My opposition even called to tell m e he could not understand the decision . We app ~ al ed and the case was later settled . Ir was a fascinating case, which got into the history of the containership. I believe we tried the case in 1973, and it wo uld have been entitled McMullen v. Marson . ] AMES HI NEY

working in a heavy sea (Sea H istory 11 4, pl 4) . I used to know Ena Atlanta M adsen Sroat, daughter of Captain M adsen, who commanded John Ena. She had sailed on the barque as a sm all child. In September 1934, the ship was dismantled at a shipyard in W ilmington, CA, and her scraps were sold and shipped to Japan to make tools of war. FRANK

Mo ntello, W isconsin Editor's note: On 15 January 1915, the barque John Ena passed through the Panama Canal, thefirst large sailing ship to do so. She was built in 1892 by R. Duncan & Co., Port Glasgow, Scotland.

The American Neptune and the Peabody Essex Museum An Op-Ed piece about The A merican Neptu ne by William S. Dudley (Sea H istory 11 4) co ntaining inaccurate info rmation leaves readers with a mistaken impression of the Peabody Essex M useum. PEM has not "opted to move away from maritime hisrory and into oth er fields,'' as the author claim s. The museum's collections have included Asian , O ceanic, African , and Na tive American art. In addi tion to its maritime art and history collections, PEM possesses large, distinguished collections of American art, textiles and costumes, photography, and architecture. Through a major transformatio n , the museum has created faci lities and p rogram s designed to advance all of its stren gths. The new maritime art and history galleries are widely recognized as am on g the fin est extant. Furtherm ore, during the past decade, the museum has m ade unprecedented acquisitio ns of m aritime art through purchase, organi zed more maritime art exhibitions, and created m ore m aritime publications than in any equivalent period prior to the consolidation of the former Peabody M useum and Essex Institute that created the Peabody Essex Museum. The claim that there is a fi nancial crisis at PEM is completely erro neous. PEM has been am o ng the fastes t growin g mu se um s i n A m e ri ca over t h e last d ecad e. During th a t p eri od the budge t in c rease d fr o m $3. 7 milli o n to m o re th a n $2 0 milli on, a nd th e mu se um recently completed a $ 194 million camp aig n . A t th e sa m e tim e, th e e nd owment has increased from $23 million to mo re than $ 100 millio n. The American Neptune has lo ng been an important journal in the field of maritime hisrory. H owever, anyo ne fa miliar with the general tre nd fo r scholarly journals recognizes that w ith the advent of the internet it has become increasingly difficul t fo r small journals of all ki nds to maintain their viabili ty. We have approached several