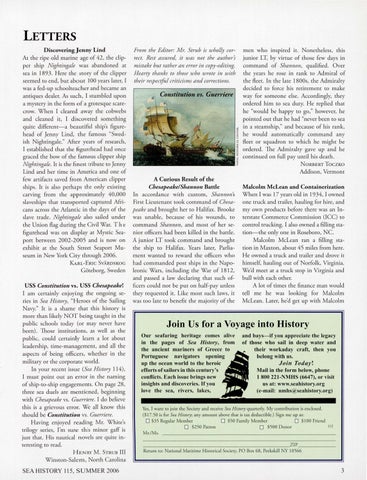 LETTERS Discovering J enn y Lind At the ripe old marine age of 42, the clipper ship Nightingale was abandoned at sea in 1893. Here the story of the clipper seemed to end , but about 100 years late r, I was a fed-up schoolteacher and becam e an antiques dealer. As such, I stumbled upon a mys tery in the form of a grotesque scarecrow. When I cleared away the cobwebs and cleaned it, I discovered something quite d ifferent-a beautiful ship's figurehead of Jenny Lind, the famous "Swedish Nightingale." After years of research, I established that the figurehead had once graced the bow of the famo us clipper ship Nightingale. Ir is the finest tribute to Jenny Lind and her time in America and one of few artifacts saved from American clipper ships. It is also perhaps the only existing carving from the approximately 40,000 slaveships that transported cap rured Africans across the Atlantic in the days of the slave trade. Nightingale also sailed under the Union flag during the Civil War. The figurehead was on display at Mys tic Seaport between 2002-2005 and is now on exhibit at the South Street Seaport Museum in New York Cicy thro ugh 2006. KARL-ERIC SvARDSKOG

USS Constitution vs . USS Chesapeake! I am certainly enjoying the ongoing series in Sea History, "H eroes of the Sailing Navy." It is a shame that this history is more than likely NOT being taught in the public schools today (or may never have been). Those insrirurions, as well as the public, could certainly learn a lot about leadership, time-management, and all the aspects of being officers, whether in the m ilitary or the corporate world. In yo ur recent issue (Sea History 11 4), I must point out an error in the naming of ship-to-ship engagements. On page 28, three sea d uels are m entioned, beginning with Chesapeake vs. Guerriere. I do believe this is a grievous error. We all know this sho uld be Constitution vs. Guerriere. H aving enjoyed reading Mr. White's trilogy series, I'm sure this minor gaff is just that. His nautical novels are quire interesting to read. HENRY

From the Editor: Mr. Strub is wholly correct. Rest assured, it was not the author's mistake but rather an error in copy-editing. Hearty thanks to those who wrote in with their respectful criticisms and corrections.

A Curious Result of the Chesapeake/Shannon Battle In acco rdance with custom , Shannon's First Lieutenant rook command of Chesapeake and bro ught her to H alifax. Brooke was unable, because of his wounds, to command Shannon, and most of her senior officers had been killed in the battle. A junior LT took command and bro ugh t the ship to Halifax. Years later, Parliament wamed to reward the officers who had commanded post ships in the Napoleonic Wars, including the War of 1812, and passed a law declaring that such officers could not be put on half-pay unless they requested it. Like most such laws, it was too late to benefit the majority of the

m en who inspired it. Nonetheless, this junior LT, by virtue of those few days in command of Shannon, q ualified. Over the years he rose in rank to Admiral of the Beet. In the late 1800s, the Admiralty decided to force his retiremem to m ake way for someo ne else. Accordingly, they ordered him to sea d uty. He replied that he "would be h appy to go," however, he pointed out that he had "never been to sea in a steam ship," and because of his rank, he would automatically command any Beer or squadron to which he might be ordered. The Admiralty gave up and he cominued o n full pay until his death . NORBERT ToczKo Addison, Vermont

Malcolm McLean and Containerization When I was 17 years old in 1934, I owned one truck and trailer, hauling for hire, and my own products before there was an Interstate Commerce Commission (ICC) to control trucking. I also owned a filling station- the only one in Roseboro, NC. Malcolm McLean ran a filling station in M ax ton, about 45 m iles from here. He owned a truck and trailer and drove it himself, hauling out of Norfolk, Virginia. We'd m eet at a truck stop in Virginia and bull with each other. A lot of tim es the finance m an would tell me he was looking for Malcolm McLean. Later, he'd get up with Malcolm

Join Us for a Voyage into History Our seafaring heritage comes alive in the pages of Sea History, from the ancient mariners of Greece to Portuguese naviga tors openin g up the ocean world to the heroic efforts of sailors in this century's conflicts. Each issue brings new insights and discoveries. If you love the sea, rivers, lakes,

and bays-if you appreciate the legacy of those who sail in deep water and their workaday craft, then you belong with us.