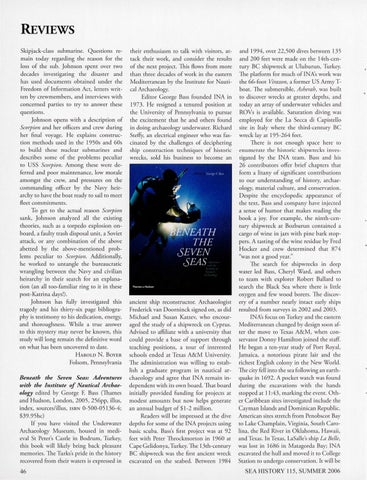 REVIEWS Skipj ack-class submarine. Q uestio ns remain today regarding the reaso n fo r the loss of the sub. Johnson spent over two decades inves tigating the disaster and has used documents obtained under the Freedom of Info rmation Act, letters wri tten by crewmembers, and interviews with concerned parties to try to answer these questio ns. Johnson o pens with a descrip tion of Scorpion and her officers and crew du ring her fi nal voyage. H e explains construction m ethods used in the 195 0s and 60s ro build these nuclear sub marines and describes som e of the problems peculiar to USS Scorpion . Among these were deferred and poor m aintenance, low m orale am ongst the crew, and pressures on the co mmanding officer by the Navy heirarchy to have the boat ready to sail to meet fleet commi tments. To get to the actual reason Scorpion sank, Johnson analyzed all the existing theo ries, such as a torpedo explosion onboard, a fa ul ty trash disposal unit, a Soviet attack, or any combinatio n of the above abetted by the above-mentioned pro blem s peculiar to Scorpion. Additionally, he worked to untangle the bureaucratic wra ngling between the Navy and civilian heirarchy in their search for an explanation (an all too-familiar ring to it in these post-Katrina days!). Jo hnson has fully inves tigated this tragedy and his thir ty-six page bibliography is testimony to his dedication, energy, and tho roughness. W hile a true answer to this mystery m ay never be known, this study will long remain the definitive wo rd on what has been uncovered to date. HAROLD

Beneath the Seven Seas: Adventures with the Institute of Nautical Archaeology edited by George F. Bass (Tham es and Hudson, London , 2005 , 256pp, illus, index, sources/illus, ISBN 0-500-0 5136-4; $39.95 hc) If yo u have visited the U nderwater Archaeology M useum, ho used in medieval St Peter's Castle in Bodrum, Turkey, this book will likely bring back pl easant m emories . The Turks's pride in the histo ry recovered from their waters is expressed in 46

their enthusiasm to talk with visito rs, attack th eir work, and consider the results of the next project. This flows from m ore than three decades of work in the eastern M editerranean by the Institute for Nautical Archaeology. Editor George Bass fo unded INA in 1973. H e resigned a tenured position at the University of Pennsylvania to pursue the excitement that he and others fo und in doing archaeology underwater. Richard Steffy, an electrical engineer who was fascinated by the challenges of deciphering ship construction techniq ues of histo ric wrecks, sold his business to become an

ancient ship reconstructor. Archaeologist Frederick van Doorninck signed on, as did Michael and Susan Katzev, who encouraged the study of a shipwreck on Cyprus. Advised to affiliate with a university that could provide a base of support th ro ugh teaching positions, a to ur of interested sch ools ended at Texas A&M U niversity. The administration was willing to establish a graduate program in nautical archaeology and agree th at INA rem ain independent with its own board. That board initially provided fundin g fo r projects at modest am o unts but now helps generate an annual budget of $ 1-2 million. Readers will be impressed at the dive dep ths for some of the INA projects using basic scuba. Bass's first project was at 92 feet with Peter Throckmorton in 1960 at Cape Gelidonya, Turkey. The 13 th-century BC shipwreck was the fi rst ancient wreck excavated on the seabed. Between 1984

and 1994, over 22,5 00 dives between 135 and 200 feet were made on the 14th-century BC shipwreck at Uluburun, Turkey. The platform fo r much ofI NA's work was the 66-foot Virazon, a fo rmer US Army Tboat. The submersible, Asherah, was buil t to discover wrecks at greater depths, an d today an array of underwater vehicles and ROVs is available. Saturation diving was employed for the La Secca di Capistello site in Italy where th e third-century BC wreck lay at 195-264 fee t. There is no t eno ugh space here to enumerate th e hi sto ric shipw recks investigated by the INA team . Bass and his 26 contribu to rs offer brief chapters that fo rm a litany of significant contribu tions to our understanding of history, archaeology, m aterial cultu re, and conservation . D espite the encyclopedic appearance of the text, Bass and company have injected a sense of humor that m akes reading the book a joy. For example, the ninth-century shipw reck at Bozburun contained a cargo of wine in jars with pine bark sto ppers. A tas ting of the wine residue by Fred H ocker and crew determined that 874 "was not a good year." The search for shipwrecks in deep wa ter led Bass, Cheryl Ward, and others to team with explorer Robert Ballard to search the Black Sea where there is little oxygen and few wood borers. The discovery of a number nearly intact early ships resul ted from surveys in 2002 and 2003. INA's foc us on Turkey and the eastern Mediterranean changed by design soon after the move to Texas A&M, when conservato r Do nny H amilton joined the staff. H e began a ten-year study of Port Royal , Jamaica, a notorious pi rate lair and the richest English colony in the New World. The city fe ll into the sea fo llowing an earthquake in 1692. A pocket watch was fo und during the excavations with the hands stopped at 11:43, m arking the even t. Other Caribbean sites investigated include the Cayman Islands and D ominican Republic. Ameri can sites stretch from Penobscot Bay to Lake C ham plain, Virginia, South Carolina, the Red River in O klahoma, Hawaii, and Texas . In Texas, LaSalle's shi p La Belle, was lost in 1686 in Matago rda Bay; INA excavated the hull and m oved it to College Station to undergo conservation . It will be SEA HISTORY 11 5, SUM MER 2006