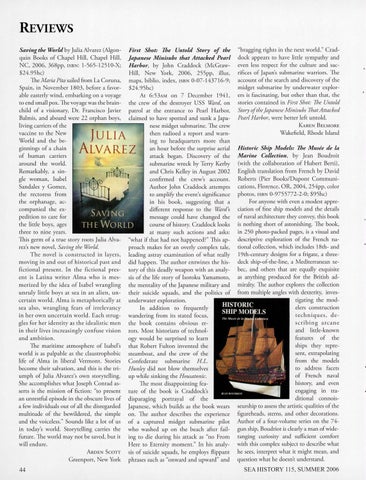 REVIEWS Saving the World by Jul ia Alvarez (Algonquin Books of Chapel Hill , C hapel Hill, NC, 2006, 368 pp, ISBN: 1-565 -1 2 510-X; $24.95hc) The Maria Pita sailed from La C oruna, Spain, in November 1803, before a favorable easterly wind, embarking on a voyage to end sm all pox. The voyage was the brainchild of a visionary, Dr. Francisco Javier Balmis, and aboard were 22 orphan boys, living carriers of the vaccine to the New W orld and the beginnings of a chain of human carriers around the world. Rem arkably, a single wo man , Isabel Sandales y Gomez, the rectoress from the orphanage, accompanied the expedition to care for the little boys, ages three to nine years. This germ of a true story roots Julia Alvarez's new novel, Saving the World. T h e novel is con structed in laye rs, m oving in and o ut of historical p as t and fi ctio n al present. In the fi ction al present is Latina writer Alma who is mesm erized by the idea of Isabel w rangling unruly little boys at sea in an ali en , un certain world. Alma is m etaphorically at sea also , wrangling fea rs of irrelevan cy in h er ow n uncertain world . Each struggles fo r h er identity as the idealisti c men in their lives increasingly co nfuse vision and ambitio n . The maritime atmosphere of Isabel's world is as palpable as the claustrophobic life of Alm a in liberal Vermont. Stories become their salvation, and this is the triumph of Julia Alvarez's own storytelling. She accomplishes what Joseph Conrad asserts is the mission of fiction : "to present an unrestful episode in the obscure lives of a few individuals out of all the disregarded multitude of the bewildered, the simple and the voiceless." Sounds like a lo t of us in today's world. Storytelling carries the future. The world m ay not be saved, but it will endure.

"bragging rights in the next wo rld." Craddock appears to have little sympathy and even less respect for the culture and sacrifices of Japan's submarine warriors. The acco unt of the search and discovery of the midget submarine by underwater explorers is fascinating, but other than that, the stories contained in First Shot: The Untold

Hill, New York, 2006, 255pp, illus, m aps, bibli o, index, ISBN 0-07- 1437 16-9; $24.95hc) At 6: 53AM on 7 D ecember 194 1, the crew of the destroyer USS "Ward, on patrol at the entrance to Pearl H arbor, Story ofthe Japanese M inisubs That Attacked claimed to have spotted and sunk a Japa- Pearl Harbor, were better left untold. KAREN B ELMORE nese midget submarin e. The crew Wakefield, Rhode Island then radioed a repo rt and warning to headquarters mo re than an hour before the surprise aerial Historic Ship Models: The Musee de la attack began . Discovery of the Marine Collection, by Jean Boudroit submarine wreck by Terry Kerby (with the collaboration of Hubert Berti), and Chris Kelley in August 2002 English translatio n from French by D avid confirmed the crew's acco unt. Roberts (Pier Books/Dupont CommuniAuthor John Craddock attempts cations, Florence, OR, 2004, 254pp, color to amplify the event's significance photos, ISBN 0-9755 772-2-0 ; $95hc) in his book, suggesting that a For anyone with even a modest appredifferent response to the "Wards ciation of fine ship models and the details m essage could have changed the of naval archi tecture they convey, this book course of history. Craddock looks is nothing short of astonishing. The book, at many such actions and asks: in 250 photo-packed pages, is a visual and "what if that had not happened?" This ap- descriptive exploration of the French naproach makes for an overly complex tale, tional collection , which includes 18th- and leading as tray examination of what really 19th-century designs for a fri gate, a threedid happen. The author en twines the his- deck ship-of-the-line, a M editerranean xetory of this deadly weapon with an analy- bee, and others that are equally exquisite sis of the life story of Isoroku Yam am oto, as anything produced fo r the British adthe mentality of the Japanese military and miralry. The author explores the collection their suicide squads, and the politics of from multiple angles with dexteri ty, invesunderwater explo ration. ...â&#x20AC;˘ â&#x20AC;˘" ' tigating the m odIn addition to frequently elers construction wandering fro m its stated fo cus, tec hniqu es, d ethe book contains obvious ersc ribin g a r ca n e rors. M ost historians of technoland little-known ogy would be surprised to learn features of the that Robert Fulton invented the ships they represteamboat, and the crew of the sent, extrapolating Confederate submarine H. L. from the models Hunley did not blow themselves to address facets up while sinking the Housatonic. of French naval The m ost disappointing feahistory, and even ture of the book is C raddock's engaging in tradisparaging portrayal of the di tional connoisJapanese, which builds as the book wears seurship to assess the artistic qualities of the on . The author describes the experience figureheads, sterns, and other decorations. of a captured midget submarine pilot Author of a fo ur-volume series on the 74who washed up on the beach after fail- gun ship, Boudriot is clearly a man of wideing to die during his attack as "no From ranging curiosiry and sufficient comfort Here to Eterniry m oment." In his analy- with this complex subj ect to describe what sis of suicide squads, he employs flipp ant he sees, interpret what it might mean , and phrases such as "onward and upward" and question what he doesn't understand.