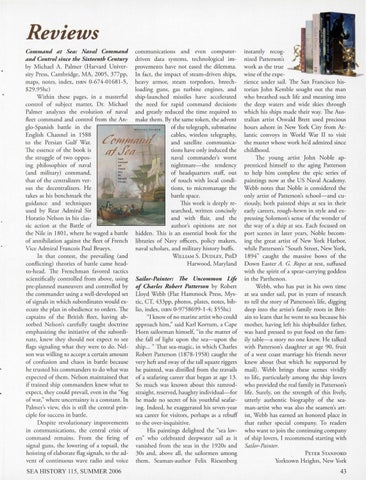 Reviews Command at Sea: Naval Command communications and even computerand Control since the Sixteenth Century driven data systems, technological imby M ichael A. Palmer (H arvard Univer- provements have not eased the dilemma. siry Press, Cambridge, MA, 2005 , 377pp, In fact, the impact of steam-driven ships, maps, notes, index, ISBN 0-674-0168 1-5, heavy armor, steam torpedoes, breechloading guns, gas turbine engines, and $29.95hc) W ithin these pages, in a mas terful ship-launched missiles have accelerated control of subj ect matter, Dr. M ichael the need fo r rapid command decisions Pal mer analyzes the evolution of naval and greatly reduced the time required to flee t command and control fro m the An- make them. By the same token, the advent co..-..-.-Al-M-..~ of the telegraph, submarine glo-Spanish battle in the ~-----.-.English C hannel in 1588 cables, wireless telegraphy, to the Persian G ulf War. and satellite communicaThe essence of the book is tions have only induced the naval commander's worst the struggle of two opposing philosophies of naval nightmare-the tendency (and military) command, of headquarters staff, out that of the centralizers verof touch with local condisus the decentralizers. H e tions, to micromanage the rakes as his benchmark the battle space. guidance and techniques This wo rk is deeply reused by Rear Admiral Sir searched, written concisely and with fl air, and the H oratio Nelson in his classic action at the Barde of author's opinions are not the N ile in 1801, where he waged a battle hidden. This is an essenti al book for the of annihilation against the fleet of French libraries of Navy officers, policy makers, Vice Admiral Francois Paul Brueys. naval scholars, and military history buffs. In that contest, the prevailing (and WILLIAM S. D UDLEY, PHD H arwood, Maryland conflicti ng) theories of battle came headto-head. The Frenchman favo red tactics scientifically co ntrolled fro m above, using Sailor-Painter: The Uncommon Life pre-planned maneuvers and controlled by of Charles Robert Patterson by Robert the commander using a well-developed set Lloyd Webb (Flat H ammock Press, Mysof signals in which subordinates would ex- tic, CT, 433pp, photos, plates, notes, bibecute the plan in obedience to orders. The lio, index, ISBN 0-9758699-1-4; $55hc) captains of the British fleet, having ab"I know of no marine artist who could sorbed Nelson's carefully taught doctrine approach him," said Karl Kortum, a Cape emphasizing the initiative of the subordi- Horn sailorman himself, "in the matter of nate, knew they should nor expect to see the fall of light upon the sea-upon the flags signaling what they were to do. Nel- ship ... " That sea-magic, in which Charles son was willing to accept a certain amount Robert Patterson (1 878- 1958) caught the of confusion and chaos in battle because very heft and sway of the tall square riggers he trusted his commanders to do what was he painted, was distilled from the travails expected of them . N elson maintained that of a seafaring career that began at age 13. if trained ship commanders knew what to So much was known about this ramrodexpect, they could prevail, even in the "fog straight, reserved, haugh ry individual-for of war," where uncertainry is a constant. In he made no secret of his youthful seafarPalmer's view, this is still the central prin- ing. Indeed, he exaggerated his seven-year sea career fo r visito rs, perhaps as a rebuff ciple for success in battle. Despite revolutionary improvements to the over-inquisitive. in communications, the central crisis of His paintings delighted the "sea lovcom mand remains. From the firin g of ers" who celebrated deepwater sail as it signal guns, rhe lowe ring of a to psail, the vanished fro m the seas in the 1920s and hoisting of elaborate flag signals, to the ad- 30s and, above all, the sailormen among vent of continuous wave radio and voice them . Seaman-author Felix Riesenberg SEA HISTORY 115, SUMMER 2006

instantly recognized Patterson's work as the true wine of the experience under sa il. The San Francisco historian John Kemble sought out the man who breathed such life and meaning into the deep waters and wide skies through which his ships made their way. The Australian artist O swald Brett used precious hours ashore in New York C iry from Atlantic convoys in World War II to visit the mas ter whose work he'd admired since childhood. The yo ung artist John N oble apprenticed himself to the aging Patterson to help him complete the epic series of paintings now at the US Naval Academy. Webb notes that Noble is considered the only artist of Patterson's school-and curiously, both painted ships at sea in their early careers, rough-hewn in sryle and expressing Solomon's sense of the wonder of the way of a ship at sea. Each focused on port scenes in later years, Noble becoming the great artist of N ew York Harbor, while Patterson's "South Street, New York, 1894" caught the massive bows of the Down Easter A. G. Ropes at rest, suffused with the spirit of a spear-carrying goddess in the Parthenon. Webb, who has put in his own time at sea under sail, put in years of research to tell the story of Patterson's life, digging deep into the artist's family roots in Britain to learn that he we nt to sea because his mother, having left his shipbuilder fa ther, was hard pressed to put food on the fam ily table-a story no one knew. H e talked with Patterso n's daughter at age 90, fr uit of a wes t coast marriage his friends never knew about (but which he supported by mail). Webb brings these scenes vividly to life, particularly among the ship lovers who provided the real family in Patterson's life. Surely, on the strength of this lively, utterly authentic biography of the seaman-artist who was also the seamen's artist, Webb has earned an honored place in that rather special company. To readers who want to join the continuing company of ship lovers, I recommend starting with Sailor-Painter. PETER STANFORD Yorktown Heights, N ew York