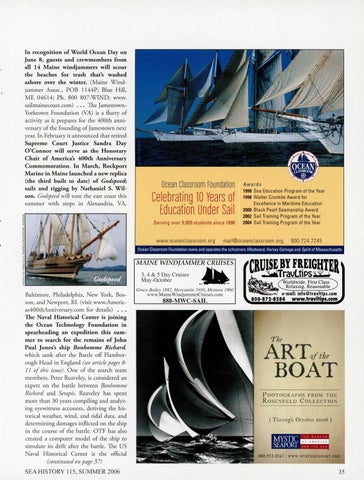 In recognition of World Ocean Day on June 8, guests and crewmembers from all 14 Maine windjammers will scour the beaches for trash that's washed ashore over the winter. (Maine Windjammer Assoc., POB 1144P; Blue Hill, ME 04614; Ph. 800 807-WIND; WWW. sailmainecoast.com) ... The JamestownYorktown Foundation (VA) is a flurry of activity as it prepares for the 400th anniversary of the founding ofJamestown next year. In February it announced that retired Supreme Court Justice Sandra Day O'Connor will serve as the Honorary Chair of America's 400th Anniversary Commemoration. In March, Rockport Marine in Maine launched a new replica (the third built to date) of Godspeed; sails and rigging by Nathaniel S. Wilson. Godspeed will tour the east coast this summer with stops in Alexandria, VA,

Celebrating 10 Years of Education Under Sail Serving over 9,000 students since 1996

Baltimore, Philadelphia, New York, Boston, and Newport, RI. (visit www.Americas400thAnniversary.com for details) ... The Naval Historical Center is joining the Ocean Technology Foundation in spearheading an expedition this summer to search for the remains of John Paul Jones's ship Bonhomme Richard, which sank after the Battle off Flamborough H ead in England (see article pages 811 of this issue). One of the search team members, Peter Reaveley, is considered an expert on the battle between Bonhomme Richard and Serap is. Reaveley has spent more than 30 years compiling and analyzing eyewitness accounts, deriving the historical weather, wind, and tidal data, and determining damages inflicted on the ship in the course of the battle. OTF has also created a computer model of the ship to simulate its drift after the battle. The US Naval Historical Center is the official (continuted on p age 31) SEA HISTORY 115, SUMMER 2006