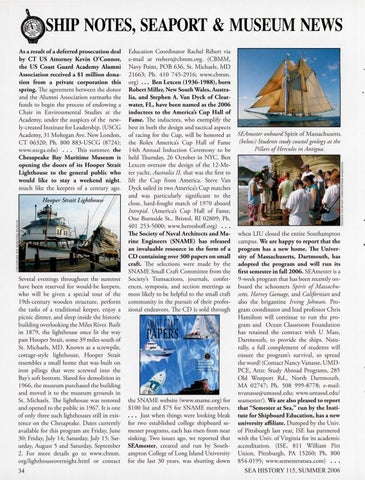 9smP NOTES, SEAPORT &amp;MUSEUM NEWS As a result of a deferred prosecution deal by CT US Attorney Kevin O&#39;Connor, the US Coast Guard Academy Alumni Association received a $1 million donation from a private corporation this spring. The agreemem berween the donor and the Al umni Association earmarks the funds to begin the process of endowing a Chair in Environmental Studies at the Academy, under the auspices of the newly-created Institute fo r Leadership. (USCG Academ y, 3 1 Mohegan Ave. New London, CT 06320; Ph. 800 883-USCG (8724) ; www. uscga.edu) ... This summer, the Chesapeake Bay Maritime Museum is opening the doors of its Hooper Strait Lighthouse to the general public who would like to stay a weekend night, m uch like the keepers of a century ago.

Several evenings throughout the sum mer have been reserved fo r wo uld-be keepers, who will be given a special tour of the 19th-century wooden structure, perform the tasks of a traditional keeper, enjoy a picnic dinner, and sleep inside the historic building overlooking the M iles River. Built in 1879, the lighthouse once lit the way past H ooper Strait, some 39 miles sou th of St. M ichaels, M D. Known as a screwpile, cottage-style lighthouse, H ooper Strait resembles a small home that was built on iro n pilings that were screwed into the Bay&#39;s soft bottom . Slated for demoli tion in 1966, the museum purchased the building and moved it to the museum gro unds in St. M ichaels. The lighthouse was restored and opened to the public in 1967 . It is one of only three such lighthouses still in existence on the Chesapeake. D ates currently available for this program are Friday, June 30; Friday, July 14; Saturday, July 15; Saturday, August 5 and Saturday, September 2. Fo r more details go to www.cbmm. org/ lighthouseovernight.html or contact

Education Coordinator Rachel Rebert via e-mail at rrebert@cbmm.org. (CBMM, Navy Point, PO B 636, St. M ichaels, MD 2 1663; Ph. 4 10 745-29 16; www.cbmm. org) ..â&amp;#x20AC;˘ Ben Lexcen (1936-1988), born Robert Miller, New South Wales, Australia, and Stephen A. Van Dyck of Clearwater, FL, have been named as the 2006 inductees to the America&#39;s Cup Hall of Fame. The inductees, who exemplify the best in both the design and tactical aspects of racing fo r the C up, will be honored at the Rolex America&#39;s C up H all of Fame 14th Annual Induction Ceremony to be held Thursday, 26 O ctober in N YC. Ben Lexcen oversaw the design of the 12-Meter yacht, Australia Il that was the fi rst to lift the C up from America. Steve Van Dyck sailed in rwo America&#39;s C up matches and was particularly significant to the close, hard-fought match of 1970 aboard Intrepid. (America&#39;s C up H all of Fame, O ne Burnside St. , Bristol, RI 02809; Ph. 401 25 3-5000; www. herreshoff. org) ..â&amp;#x20AC;˘ The Society of Naval Architects and Marine Engineers (SNAME) has released an invaluable resource in the form of a CD containing over 300 papers on small craft. The selections were made by the SNAME Small Craft Committee from the Society&#39;s Transactions, journals, conferences, symposia, and section meetings as most likely to be helpful to the small craft communi ty in the pursuit of their professional endeavors. The C D is sold through

the SNAME website (www.sname.org) for $ 100 list and $75 fo r SNAME members. . . . Just when things were looking bleak for rwo established college shipboard semester programs, each has risen fro m near sinki ng. Two issues ago, we reported that SEAmester, created and run by Southampton College of Long Island University fo r the last 30 years, was shutting down

when LIU closed the entire Southamp ton campus. We are happy to report that the program has a new home. The University of Massachusetts, Dartmouth, has adopted the program and will run its first semester in fall 2006. SEAmester is a 9-week program that has been recently onboard the schoo ners Sp irit of Massachusetts, Harvey Gamage, and Californian and also the brigantine Irving Johnson. Program coordinator and lead professor Chris H amilton will continue to run the program and Ocean Classroom Foundation has retained the contract with U Mass, D artmouth, to provide the ships. Naturally, a full complement of students will ensure the program&#39;s survival, so spread the word! (Contact Nancy Vanasse, UMD PCE, Attn: Study Abroad Programs, 285 Old Westport Rd. , N orth D artmouth, MA 02747; Ph. 508 999-8778; e-mail: nvanasse@umassd. edu; www.umassd.edu/ seamesterl). We are also pleased to report that &quot;Semester at Sea,&quot; run by the Institute for Shipboard Education, has a new university affiliate. Dumped by the Univ. of Pittsburgh last year, ISE has partnered with the Univ. of Virginia for its academic accreditation. (ISE, 8 11 W illiam Pitt Union, Pi nsburgh, PA 15260; Ph. 800 854-0 195; www.semesteratsea.com) ... SEA HISTORY 115 , SU MMER 2006