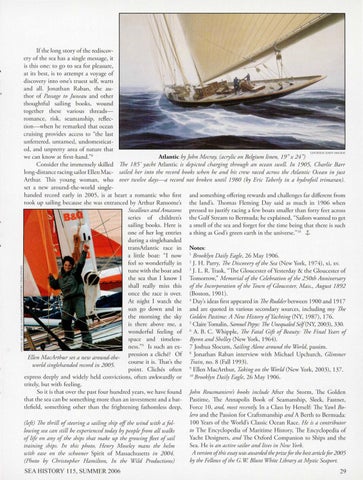 If the long story of the rediscovery of the sea has a single m essage, it is this o ne: to go to sea for pleasure, at its best, is to attempt a voyage of discovery into o n e&#39;s truest self, warts and all. Jonathan Raban, the author of Passage to J uneau and o ther thoughtful sailing books, wo und together these various threadsromance, risk, seamanship, reflectio n-when he remarked that ocean cruising provides access to &quot;the last unfettered, un tamed, undomesticated , and unpretry area of nature that COURTESY JOHN M EC llAY we can know at first- hand.&quot; 8 Atlantic by Joh n Mecray, (acrylic on Belgium linen, 19&quot; x 24&#39;) Co nsider the immensely skilled The 185&#39; yacht Adan tic is depicted charging through an ocean swell. In 1905, Charlie Barr long-distance racing sailor Ellen Mac- sailed her into the record books when he and his crew raced across the Atlantic Ocean in just Arthur. This yo ung woman, who over twelve days-a record not broken until 1980 (by Eric Taberly in a hydrofoil trimaran) . set a new aro und-the-world singlehanded record early in 2005, is at heart a romantic who first and something offering rewards and challenges far different from rook up sailing because she was entranced by Arthur Ransome&#39;s rhe land&#39;s. Thomas Fleming Day said as much in 1906 when Swallows andAmazons pressed to justify racing a few boars smaller than forty feet across seri es of children&#39;s the G ulf Stream to Bermuda; he explain ed, &quot;Sailors wanted to gee sailing books. H ere is a smell of the sea and forge r for the rime being that there is such one of her log entries a thing as God&#39;s green earth in the unive rse.&quot; 10 j:, during a singlehanded trans.Atlantic race in Notes: a little boat: &quot;I now 1 Brooklyn Daily Eagle, 26 May 1906. feel so wonderfully in 2 J . H. Parry, The Discovery ofthe Sea (New York, 1974), xi, xv. tune with the boat and 3 J. L. R. Trask, &quot;The Gloucester ofYesterday &amp; the G loucester of the sea that I know I Tomorrow,&quot; Memorial of the Celebration of the 250th Anniversary shall really miss this of the Incorporation of the Town of Gloucester, Mass., August 1892 o nce the race is over. (Boston , 190 1). At ni ght I watch the 4 Day&#39;s ideas first appeared in The Rudder berween 1900 and 1917 sun go down and in and are quoted in various secondary so urces, including my The the morning the sky Golden Pastime: A New History of Yachting (NY, 1987), 176. is there above m e, a 5 Claire Tomalin, Samuel Pepys: The Unequaled Self(NY, 2003), 330. wonderful feeling of 6 A. B. C. Whippl e, The Fatal Gift of Beauty: The Final Years of space and timeless- Byron and Shelley (New York, 1964). ness.&quot;9 Is such an ex- 7 Joshua Slocum, Sailing Alone around the World, passi m. pressio n a cliche? Of 8 Jonathan Raban interview with M ichael Upch urch, Glimmer Ellen MacArthur set a new around-theco urse it is. That&#39;s the Train , no. 8 (Fall 1993). world singlehanded record in 2 005. point. Cliches often 9 Ellen MacArthur, Taking on the World (New York, 2003), 137. express deeply and widely held co nvictions, often awkwardly or 10 Brooklyn Daily Eagle, 26 May 1906. tritely, but with feeling. So it is that over the past fo ur hundred yea rs, we have found john Rousmaniere&#39;s books include Afte r the Storm, The Golden that the sea can b e something more than an inves tment and a bat- Pas time, The Annapolis Book of Seam anship, Sleek, Fasmet, tlefield, something other than the fri gh tening fathomless deep, Force 10, and, most recently, In a C lass by H erself: The Yawl Bolero and the Passion for C raftsmanship and A Berch to Bermuda: 100 Years of the World &#39;s C lass ic Ocean Race. He is a contributor (left) The thrill of steering a sailing ship off the wind with a folto T he Encyclopedia of Maritime Histo ry, The Encyclopedia of lowing sea can still be experienced today by people from all walks Yach t D esigners, and The Oxford Companion to Ships and the of life on any of the ships that make up the growing fleet of sail Sea. H e is an active sailor and lives in New York. training ships. In this photo, Henry Moseley mans the helm A version ofthis essay was awarded the prizefor the best article for 2 005 with ease on the schooner Spirit of Massachusetts in 2004. by the Fellows ofthe G. W Blunt White Library at Mystic Seaport. (Photo by Christopher Hamilton, In the Wild Productions) SEA Hl STORY 115, SUMMER 2006