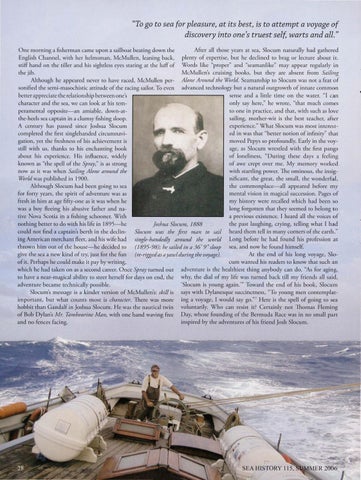 "To go to sea for pleasure, at its best, is to attempt a voyage of discovery into one's truest self, warts and all." O ne mo rning a fisherman cam e upo n a sailboat beating down the After all those years at sea, Slocum naturally had gathered English Channel, with her helmsm an , M cMullen , leaning back, plenty of expertise, but he declined to brag or lecture abour ir. sti ff hand on the till er and his sightless eyes starin g at the luff of Words like "proper" and "seamanlike" may appear regularly in the jib. M cMullen's cruising books, but they are absent from Sailing Although he appeared never to have raced, McMullen per- Alone Around the World. Seam anship to Slocum was not a feat o f so nified the semi-m asochistic atti tude of the racing sailo r. To even adva nced technology but a natural o utgrowth of innate co mm o n sense and a li ttle time on the water. "I can better appreciate the relationship between one's o nly say here," he wro te, "that much comes character and the sea, we can look at his temto one in practice, and that, with such as love peramental opposite-an amiable, down-atsailing, m other-wit is the best teacher, after the-heels sea captai n in a clumsy fi shing sloop. experience." What Slocum was m ost interestA centu ry has passed since Joshua Slocum ed in was th at "bette r no tion of infi ni ty" that co mpleted the first singlehanded circumnavigation, yet the freshness of his achievem ent is moved Pepys so profo undly. Earl y in the voystill with us, thanks to his enchanting book age, as Slocum wres tled with the first pangs of loneliness, "During these days a feelin g abo ut his experi ence. His inAuence, widely of awe crept over m e. My m emory worked known as "the spell of the Spray," is as strong with star tling power. The ominous, th e insignow as it was when Sailing Alone around the nifi cant, th e great, the small, the wonderful , World was published in 1900. the commo nplace-all appeared before m y Altho ugh Slocum had been going to sea mental vision in m agical successio n. Pages of fo r forty years, th e spi ri t of adve nture was as fresh in him at age fifty-one as it was when he my history we re recalled which had been so was a boy Aeeing his abusive father and nalong fo rgotten that they seem ed to belong to tive Nova Scoti a in a fishin g schooner. With a previous existence. I heard all the voices of nothing better to do with his life in 189 5- he the pas t laughing, crying, telling what I had Joshua Slocum, 1888 could not find a captain's berth in the declin- Slocum was the first man to sail heard them tell in m any corners of the earth." ing American merchant fleet, and his wife had single-handedly around the world Long before he had found his profession a t th rown him out of the house-he decided to (1895-98); he sailed in a 36' 9" sloop sea, and now he fo und him self. give the sea a new kind of try, just fo r the fun At the end of his long voyage, Slo(re-rigged as ayawl during the voyage). cum wanted his readers to know that such a n ofir. Perhaps he could make it pay by writing, which he had taken on as a seco nd career. O nce Spray turned o ut adventure is the healthiest thing anybody can do. ''As for agin g, to have a near-m agical abili ty to steer herself fo r days o n end, the why, the dial of m y life was turned back till m y fri ends all said , adventure became technically possible. 'Slocum is yo ung again."' Toward the end of hi s book, Slocum Slocum's m essage is a kinder versio n of M cMullen's: skill is says with D ylanesque succinctness, "To yo ung m en contemplatimportant, bur what counts m os t is character. There was more ing a voyage, I would say go." 7 H ere is the spell of going to sea hobbit th an G andalf in Joshua Slocum . H e was the nautical twin voluntarily. Who can resist it? Certainly not Thomas Fleming of Bob Dylan's M1'. Tambourine Man, with one hand waving free D ay, whose fo unding of the Bermuda Race was in no small pa rt and no fen ces facing. inspired by the adventures of his fri end Josh Slocum.