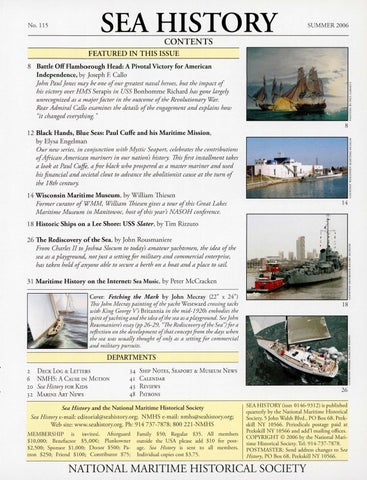 CONTENTS FEATURED IN THIS ISSUE 8 Battle Off Flamborough Head: A Pivotal Victory for American Independence, by Joseph F. Callo j ohn Paul Jones may be one ofour greatest naval heroes, but the impact of his victory over HMS Serapis in USS Bonhomme Richard has gone Largely unrecognized as a major factor in the outcome of the Revolutionary Wtir. Rear Admiral Callo examines the details ofthe engagement and exp lains how "it changed everything. " 8

12 Black Hands, Blwe Seas: Paul Cuffe and his Maritime Mission, by Elysa Engelman O ur new series, in conjunction with Mystic Seaport, celebrates the contributions ofAfrican American mariners in our nation's history. This first installment takes a Look at Paul Cuffe, a free black who prosp ered as a master mariner and used his financial and societal clout to advance the abolitionist cause at the turn of the 18th century.

18 Historic Ships on a Lee Shore: USS Slater, by Tim Rizzuto 26 The Rediscovery of the Sea, by John Rousm aniere From Charles II to J oshua Slocum to today's amateur yachtsmen, the idea of the sea as a p layground, not just a setting for military and commercial enterprise, has taken hold ofanyone able to secure a berth on a boat and a p lace to sail.

31 Maritime H istory on the Internet: Sea Music, by Peter McCracken Cover: Fetching the Mark by John Mecray (22" x 24") ?his j ohn Mecray painting ofthe yacht Wescward crossing tacks with King George Vs Britannia in the mid-1920s embodies the spirit ofyachting and the idea ofthe sea as a playground. See j ohn ~'iiiiii~ Rousmaniere's essay (pp 26-29, "lhe Rediscovery ofthe Sea") for a reflection on the development ofthat concept from the days when the sea was usually thought of only as a setting for commercial =-- --= and military pursuits.