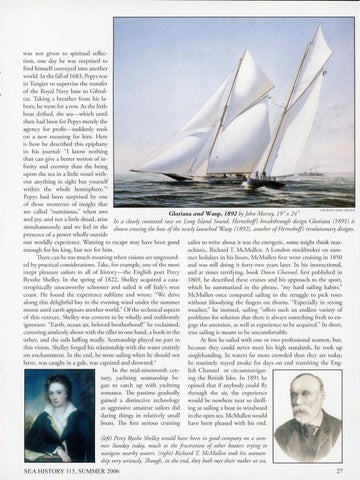 was not given to spiritual reflection, one day he was surprised to find him self conveyed into another wo rld. In the fall of 1683, Pepys was in Tangier to supervise the transfer of the Royal Navy base to G ibraltar. Taking a breather from his labors, he went for a row. As the little boat drifted, the sea-which until then had been for Pepys merely the agen cy for profit-suddenly took on a new meaning for him. Here is how he described this epiphany in his journal: "I know nothing that can give a better notion of infinity and eternity than the being upon the sea in a little vessel witho ut anything in sight bur yo urself within rhe whole hemisphere." 5 Pepys had been surprised by one of those moments of insight rhar COU RTESY JO H N M EC RAY are called "numinous,'' when awe Gloriana and Wasp, 1892 by john Mecray, 19" x 24" and joy, and nor a little dread, arise In a closely contested race on Long Island Sound, Herreshojfs breakthrough design Gloriana (1891) is simultaneously, and we feel in rhe shown crossing the bow ofthe newly launched Wasp (1892), another ofH erreshojfs revolutionary designs. presence of a power wholly outside o ur worldly experience. Wanting to escape may have been good sailor to write about it was the energetic, so me might think masochistic, Richard T. McMullen. A London stockbroker on sumenough for his king, bur nor for him. There can be wo much meaning when visions are ungro und- mer holidays in his boars, McMullen first we nt cruising in 1850 ed by practi cal co nsiderations. Take, for example, one of rhe most and was still doing it forty-two years later. In his instructional, inept pleasure sailors in all of history-the English poet Percy and at rimes terrifying, book Down Channel, first published in 1869, he described these cruises and his approach to the sport, Bysshe Shelley. In rhe spring of 1822, Shelley acquired a catastrophically unseaworthy schooner and sailed it off Italy's wes t which he summarized in rhe phrase, "my hard sailing habits." coast. H e found rhe experience sublime and wrote: "We drive McMullen once compared sailing ro rhe struggle to pick roses alo ng this deli ghtful bay in the evening wind under rhe summer without bloodying rhe fingers on thorns. "Especially in strong m oon until earth appears another world." Of rhe technical as pects weather," he insisted, sailing "offers such an endless variety of of rhis venture, Shelley was content to be wholly and stubbornly problems for solution that th ere is always something fresh to enignorant. "Earth, ocean air, beloved brotherhood! " he exclaimed, gage the attention, as well as experience to be acquired." In short, true sailing is meant to be uncomforta bl e. careering aimlessly about wi rh rhe ri ll er in one hand, a book in rhe other, and rhe sails luffing madly. Seamanship played no part in Ar first he sailed with one or rwo professional seamen, bur, this vision. Shelley forged his relationship with rhe water enrirely because they could never meet his high standards, he rook up on enchanrmenr. In rhe end, he we nt sailing when he should nor singlehanding. In waters far more crowded rhan rhey are today, he routi nely stayed awake for days on end transiting rhe Enghave, was caught in a gale, was capsized and drowned. 6 In rhe mid-nineteenth cen- lish C hannel or circumnavigattury, yachting seamanship being the British Isles . In 189 1 he gan to catch up with yachting opined char if anybody co uld fly romance. The pastime gradually through the air, rhe experience gained a distinctive technology would be nowhere near so thrill as aggressive amateur sailors did ing as sailing a boar to windward daring things in relatively small in the open sea. McMullen wo uld boars. The first serious cruising have been pleased with his end. (left) Percy Bysshe Shelley would have been in good company on a summer Sunday today, much to the frustration of other boaters trying to navigate nearby waters. (right) Richard T McMullen took his seamanship very seriously. Though, in the end, they both met their maker at sea.