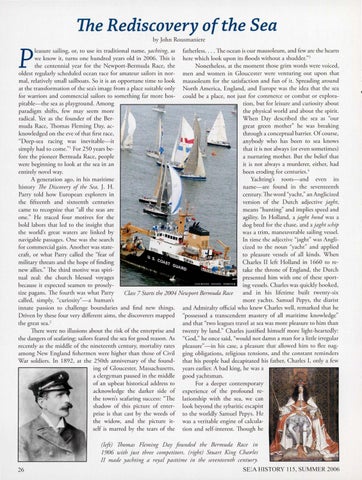 Th.e Rediscovery of the Sea by John Rousmaniere leasure sailing, or, to use its traditio nal name, yachting, as fathe rless . .. . The ocean is o ur m auso leum, and few are the hearts we know it, turns one hundred years old in 2006. This is here which look upon its flood s without a shudder." 3 Nonetheless, at the mom ent those grim words were voiced, the centennial year for the Newport-Bermuda Race, the oldest regularly scheduled ocean race for amateur sailors in nor- men and women in G loucester were venturing out upon that mal, relatively small sailboats. So it is an opportune time to look mausoleum for the satisfaction and fun of it. Spreading around at the transformation of the sea's im age from a place suitable only North America, England, and Europe was the idea that the sea for warriors and co mmercial sailors to so mething far more hos- could be a place, not just for commerce o r co mbat or exploration, but for leisure and curiosity about pitable-the sea as playgro und. Among paradigm shifts, few may seem more the physical world and abo ut the spirit. When D ay described the sea as "our radical. Yer as the founder of the Bergreat green mo ther" he was breaking muda Race, Thomas Fleming D ay, acthrough a conceptual barrier. Of course, knowledged on the eve of that first race, "Deep-sea racing was inevitable-it anybody who has been to sea knows that it is not always (or even sometimes) simply had to come." 1 For 250 years bea nurturing moth er. But the belief that fore the pioneer Bermuda Race, peo ple it is not always a murderer, either, had were beginning to look at the sea in an been erodin g for centuries. 4 entirely novel way. Yachting's roots-and even its A ge neration ago, in his maritim e nam e-are found in the sevem eemh history The Discovery of the Sea, J. H. cemury. The word "yacht," an An glicized Parry told how European explo rers in vers ion of the Durch adjective jaght, the fifteenth and sixteenth centuries means "hunting" and implies speed and came to recognize rhat "all the seas are one." H e traced four motives for the agili ty. In Holland, a jaght hond was a dog bred for the chase, and a jaght schip bold labors that led to the insight that was a trim, maneuverable sai ling vessel. the world's great waters are linked by In time the adjective "jaght" was Anglinavigable passages. One was the search cized to the noun "yacht" and appli ed for commerci al gain. Another was stateto pleas ure vessels of all kinds. When craft, or what Parry called the "fear of Charles II left Holland in 1660 to remilitary threats and the hope of finding take the throne of E ngland, the Durch new allies." The third motive was spiripresem ed him with one of these sporttual zeal: the church blessed voyages ing vessels. C harles was quickly hooked, because it expected seamen to proselyand in his lifetime built twenty-six tize paga ns. 1he fourth was what Parry Gass 7 Starts the 2004 Newport Bermuda Race called, simply, "curiosity"-a human's more yachts. Samuel Pepys, the diarist innate passion to challenge boundaries and find new things. and Adm iralty official who knew C harl es well , remarked that h e Driven by these four very differem aims, the discoverers mapped "possessed a transcendent m as tery of all maritime knowledge" and that "two leagues travel ar sea was more pleas ure to him than the great sea.2 There were no illusions about the risk of the enterprise and twenty by land." Charles justified himself more light-heartedl y: th e dange rs of seafaring; sailors feared the sea for good reason . As "God," he once said, "would not damn a man for a little irregular recently as the middle of the nineteenth century, mortali ty rates pleasure"-in his case, a pleasure that allowed him ro flee nagamo ng New England fishermen were higher than those of Civil ging o bligations, religious tensions, and the co nstam reminders War soldiers. In 1892, at the 250th annive rsary of the fo und- that his peo ple had decapitated his fatl1er, C harles I, only a few ing of G loucester, Massachusetts, years earlier. A bad king, he was a a clergyman paused in the middle good yachtsman. of an upbeat hisrorical address to For a deeper contemporary acknowledge the darker side of experience of the profound rethe town's seafaring success: "The lationship with the sea, we can shadow of this picture of enter- look beyond the sybaritic escapist prise is that cast by the weeds of to the wo rldly Samuel Pepys. H e the widow, and the picture it- was a verirable engine of calculaself is marred by the tears of the tion and self-interest. Though he