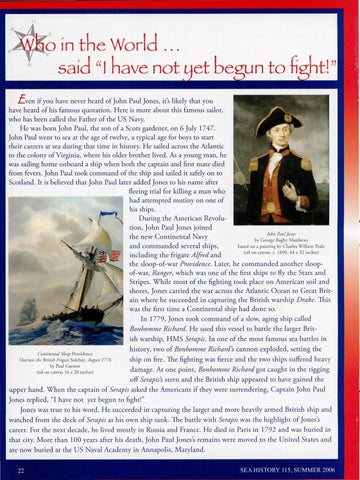 said "I have not etbe untoh

t ven if you have never heard of John Paul Jones, it's likely that you have heard of his famous quotation. Here is more about this famous sailor, who has been called the Father of the US Navy. He was born John Paul, the son of a Scots gardener, on 6 July 1747. John Paul went to sea at the age of twelve, a typical age for boys to start their careers at sea during that time in history. He sailed across the Atlantic to the colony of Virginia, where his older brother lived. As a young man, he was sailing home onboard a ship when both the captain and first mate died from fevers. John Paul took command of the ship and sailed it safely on to Scotland. It is believed that John Paul later added Jones to his name after fleeing trial for killing a man who had attempted mutiny on one of his ships. During the American Revolution, John Paul Jones joined the new Continental Navy and commanded several ships, including the frigate A/jred and

the sloop-of-war Providence. Later, he commanded another sloopof-war, Ranger, which was one of the first ships to fly the Stars and Stripes. While most of the fighting took place on American soil and shores, Jones carried the war across the Atlantic Ocean to Great Britain where he succeeded in capturing the British warship Drake. This was the first time a Continental ship had done so. In 1779, Jones took command of a slow, aging ship called Bonhomme Richard. He used this vessel to battle the larger British warship, HMS Serapis. In one of the most famous sea battles in Continental Sloop Providence Outruns the British Frigate Solebay, August 1776 by Paul Garn ett (o il o n canvas 16 x 20 inches)

history, two of Bonhomme Richard's cannon exploded, setting the ship on fire. The fighting was fierce and the two ships suffered heavy

damage. At one point, Bonhomme Richard got caught in the rigging off Serapis's stern and the British ship appeared to have gained the upper hand. When the captain of Serapis asked the Americans if they were surrendering, Captain John Paul Jones replied, "I have not yet begun to fight!" Jones was true to his word. He succeeded in capturing the larger and more heavily armed British ship and watched from the deck of Serapis as his own ship sank. The battle with Serapis was the highlight of Jones's career. For the next decade, he lived mostly in Russia and France. He died in Paris in 1792 and was buried in that city. More than 100 years after his death, John Paul Jones's remains were moved to the United States and are now buried at the US Naval Academy in Annapolis, Maryland.