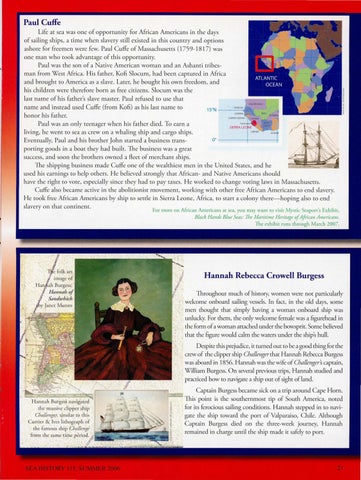 Life at sea was one of opportunity for African Americans in the days of sailing ships, a time when slavery still existed in this country and options ashore fo r freemen were few. Paul C uffe of Massachusetts (1 759-1817) was one man who took advantage of this opportuni ty. Paul was the son of a Native American woman and an Ashanti tribesman from Wes t Africa. His father, Kofi Slocum, had been captured in Africa and brought to America as a slave. Later, he bought his own freedom, and his children were therefore born as free citizens. Slocum was the last name of his father's slave master. Paul refused to use rh at name and instead used C uffe (from Kofi) as his last name to honor his father. Paul was an only teenager when his father died. To earn a living, he went to sea as crew on a whaling ship and cargo ships. Eventually, Paul and his brother John started a business transporting goods in a boar they had built. The business was a great success, and soon the brothers owned a fleer of merchant ships. The shipping business made C uffe one of the wealthies t men in the United Stares, and he used his earnings to help others. H e believed strongly rhar Afri can- and Native Americans should have rhe right to vo te, especially since they had to pay taxes. H e worked to change voting laws in Massachusetts. C uffe also became active in the abolitionist movement, worki ng with other free African Americans to end slavery. H e took free African Americans by ship to settle in Sierra Leone, Africa, to start a colony there-hoping also to end slavery on rhar continent.

Throughout much of histo1y, women were not parrictuarly welcome onboard sailing vessels. In fact, in the old days, some men thought that simply having a woman onboard ship was . . unlucky. For them, the only welcome female was a figurehead in :, .: ~- the form of a woman attached under the bowsprit. Some believed . '. that the figure would calm the waters under the ship's hull. · · ;. ·. . ·•

Despite this prejudice, it turned out to be a good thing for the crew of the clipper ship Challenger that Hannah Rebecca Burgess was aboard in 1856. Hannah was the wife of Challenger's captain, William Burgess. On several previous trips, Hannah studied and practiced how to navigate a ship out of sight ofland.

Captain Burgess became sick on a trip around Cape Hom. · This point is the southernmost tip of South America, noted ~ for its ferocious sailing conditions. Hannah stepped in to navigate the ship toward the port of Valparaiso, Chile. Although Captain Burgess died on the three-week journey, Hannah remained in charge until the ship made it safely to port.