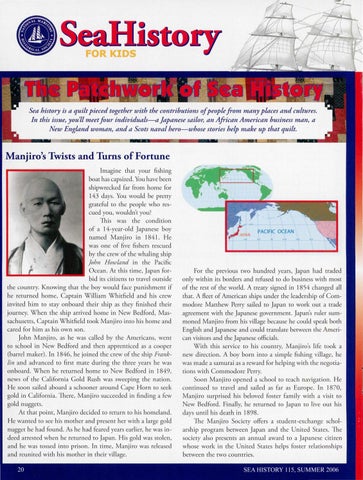 Sea history is a quilt pieced together with the contributions ofpeople from many places and cultures. In this issue, you'll meet four individuals-a Japanese sailor, an African American business man, a New England woman, and a Scots naval hero-whose stories help make up that quilt.

Manjiro's Twists and Turns of Fortune Imagine that your fishing boat has capsized. You have been shipwrecked far from home fo r 143 days. You would be pretry grateful to the people who rescued you, wouldn't you? This was the condition of a 14-year-old Japanese boy named M anjiro in 184 1. H e was one of five fishers rescued by the crew of th e whaling ship john Howland in the Pacific O cean. At this time, Japan forbid its citizens to travel outside the co untry. Knowing that the boy would face punishment if he returned hom e, Captain William Whitfield and his crew invited him to stay onboard their ship as they finish ed their journey. When the ship arrived home in New Bedford, M assachuse tts, Captain Whitfield took M anjiro into his home and cared for him as his own son. John M anjiro, as he was called by the Am ericans, went to school in New Bedford and then apprenticed as a cooper (barrel maker). In 1846, he joined the crew of the ship Franklin and advanced to first mate during the three years he was onboard. When he returned home to New Bedfo rd in 1849, news of the Califo rnia Gold Rush was sweeping the nation. H e soon sailed aboard a schooner around Cape Horn to seek gold in Cali fo rnia. There, Manjiro succeeded in finding a few gold nuggets. At that po int, M anjiro decided to return to his homeland. H e wanted to see his mother and present h er with a large gold nugget he had found. As he had feared years earlier, he was indeed arrested when he returned to Japan . His go ld was stolen, and he was tossed into prison. In time, M anjiro was released and reunited with his mother in their village.

For the previous two hundred years, Japan had traded only within its borders and refused to do business with most of the rest of the world. A treaty signed in 1854 changed all that. A fleet of American ships under the leadership of Co mmodore M atthew Perry sailed to Japan to work out a trade agreement with the Japanese government. Japan's ruler summoned M anjiro from his village because he could speak both English and Japanese and could translate between the American visitors and the Japanese officials. W ith this service to his country, Manji ro's life took a new directi on. A boy born in to a simple fi shing village, he was made a samurai as a reward fo r helping with the nego tiations with Commodore Perry. Soo n M anjiro opened a school to teach navigation. H e contin ued to travel and sailed as fa r as Europe. In 1870, M anji ro surprised his beloved foster family with a visit to New Bedfo rd. Finally, h e returned to Japan to live out his days until his death in 1898. 1h e M anjiro Sociery offers a student-exchange scholarship program between Japan and the U nited States. The sociery also presents an annual award to a Japanese ci tizen whose work in the U nited States helps foster relationships between th e two countries.