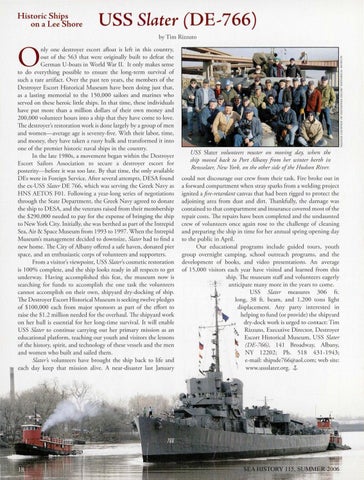 Historic Ships on a Lee Shore

nly one destroyer escort afloat is left in this country, out of the 563 that were originally built to defeat the Ge rman U-boats in World War II . It only makes sense to do everything possible to ensure the long-term survival of such a rare artifact. Over the past ten years, the members of the Destroyer Escort Historical Museum have been doing just that, as a lasting memorial to the 150,000 sailors and marines who served on these heroic little ships. In that time, these individuals have put more than a million dollars of their own money and 200,000 volumeer hours into a ship that they have come to love. The destroyer's restoration work is done largely by a group of m en and women-average age is sevenry-five. With their labor, time, and money, they have taken a rusry hulk and transformed it into one of the premier historic naval ships in the country. In the late 1980s, a movem ent began within the Destroyer Escort Sailors Association to secure a destroyer escort for posteri ry-before it was too late. By that time, the on ly available DEs were in Foreign Service. After several attempts, DESA found the ex-USS Slater DE 766, which was serving the Greek Navy as HNS AETOS FO l. Following a year-lo ng series of negotiations through the State D epartment, the Greek Navy agreed to donate the ship to DESA, and the veterans raised from their membership the $290,000 needed to pay for the expense of bringing the ship to New York Ciry. Initially, she was berthed as part of the Intrepid Sea, Air & Space Museum from 1993 to 1997. When the Intrepid Museum's management decided to downsize, Slater had to find a new home. The C iry of Albany offered a safe haven, donated pier space, and an enthusias tic corps of volumeers and supporters. From a visitor's viewpoint, USS Slater's cosmetic restoration is 100% co mplete, and the ship looks ready in all respects to get underway. Having acco mplished this feat, the museum now is searching fo r funds to accomplish the o ne task the volunteers cannot acco mplish on their own, shipyard dry-docking of ship. The D estroyer Esco rt Historical Museum is seekin g twelve pledges of $ 100,000 each from major sponsors as part of the effort to raise the $1.2 million needed for the overhaul. The shipyard work on her hull is essemial for her long-time survival. It will enable USS Slater to co minue carrying out her primary mission as an educational platform, teaching o ur yo uth and visitors the lessons of the histo ry, sp irit, and technology of these vessels and the men and wom en who built and sailed them. Slater's volumeers have brought the ship back to life and each day keep that mission alive. A near-disaster last January

USS Slater volunteers muster on moving day, when the ship moved back to Po rt Albany from her winter berth in Rensselaer, New Yo rk, on the other side ofthe Hudson River. could not disco urage our crew from their task. Fire broke o ut in a forward compartment when stray sparks from a weldi ng project ignited a fire-retardant canvas that had been rigged to protect the adjoining area from dust and dirt. 1hankfully, the damage was contained to that compartment and insurance covered most of the repair cos ts. The repairs have been co mpleted and the undaun ted crew of volunteers once again rose to the challenge of cleaning and preparing the ship in time for her annual spring opening day to th e public in April. Our educational program s include guided tours, you th gro up overnight camping, school outreach program s, and the development of books, and video presentations. An average of 15,000 visitors each year have visited and learned from this ship. 1he museum staff and volunteers eagerly · .·f · anticipate many more in the years to com e. USS Slater measures 3 06 ft. long, 38 ft. beam, and 1,200 tons light displacem ent. Any parry interes ted in helping to fund (o r provide) the shipyard dry-dock work is urged to contact: Tim Rizzuto, Executive Director, Destroyer \ Escort Historical Museum, USS Slater (DE-766), 141 Broadway, Albany, ~ NY 12202; Ph. 518 431- 1943; e-mail: shipsde766@aol.com ; web site: www.ussslater.org. j:,