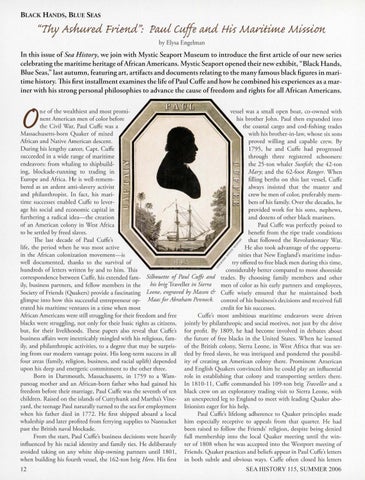 In this issue of Sea History, we join with Mystic Seaport Museum to introduce the first article of our new series celebrating the maritime heritage ofAfrican Americans. Mystic Seaport opened their new exhibit, "Black Hands, Blue Seas," last autumn, featuring art, artifacts and documents relating to the many famous black figures in maritime history. This first installment examines the life of Paul Cuffe and how he combined his experiences as a mariner with his strong personal philosophies to advance the cause of freedom and rights for all African Americans.

ne of the wealthiest and most promivessel was a small open boat, co-owned with nent American men of color before his brother John . Paul then expanded into the C ivil War, Paul C uffe was a the coastal cargo and cod-fishing trades Massachuserrs-born Quaker of mixed with his brother-in-law, whose six sons African and Na ti ve American descent. proved willing and capable crew. By During his lengthy career, Capt. Cuffe 1795, he and Cuffe had progressed succeeded in a wide range of maritime through three registered schooners: endeavors: from whaling to shipbuildthe 25-ton whaler Sunfish; the 42-ton ing, blockade-running to trading in Mary; and the 62-foot Ranger. When Europe and Africa. H e is well-rememfilling berths on this last vessel, C uffe bered as an ardent anti-slavery activist always insisted that the master and and philanthropist. In fact, his maricrew be men of color, preferably memtime successes enabled C uffe to leverbers of his fam ily. Over the decades, he age his social and economic capital in provided work for his sons, nephews, furthering a radical idea- the creation and dozens of other black mariners. of an American colony in West Africa Paul Cuffe was perfectly poised to to be settled by freed slaves. benefit from the ripe trade conditions The last decade of Paul C uffe's that followed the Revolutionary War. life, the period when he was m ost active , 0 Âˇl H e also took advantage of the opportuin the African colonization movement-is ~l,;. nities that New England's maritime induswell documented, thanks to the survival of .,,./' try offered to free black men during this time, ~;;;;;;;;;;:;;;;::;;;;:::::::;;;.;, & hundreds of letters written by and to him. This ' considerably better compared to most shoreside correspondence berween Cuffe, his extended fam- Silhouette of Paul Cuffe and trades. By choosing fam ily members and other his brig Traveller in Sierra ily, business partners, and fellow members in the men of color as his early partners and employees, Leone, engraved by Mason & Cuffe wisely ensured that he maintained both Society of Friends (Quakers) provide a fascinating glimpse into how this successful entrep reneur op- Maas for Abraham Pennock. control of his business's decisions and received full erated his maritime ventures in a time when most credit for his successes. African Americans were still struggling for their freedom and free C uffe's most ambitious maritime endeavors were driven blacks were struggling, not only for their basic rights as citizens, jointly by philanthropic and social motives, not just by the drive but, for their livelihoods. These papers also reveal that C uffe's for profit. By 1809, he had become involved in debates abo ut business affairs were inextricably mingled with his religious, famthe future of free blacks in the United States. When he learned ily, and philan thropic activities, to a degree that may be surpris- of th e British colony, Sierra Leone, in West Africa that was seting from our modern vantage point. His long-term success in all tled by freed slaves, he was intriqued and pondered the possibilfour areas (family, religion, business, and racial uplift) depended ity of creating an American colony there. Prominent American and English Quakers convinced him he could play an influential upon his deep and energetic commitment to the other three. Born in Dartmouth, Massachusetts, in 1759 to a Wam- role in establishing that colony and transporting settlers there. panoag mother and an African-born father who had gained his In 1810-11, C uffe commanded his 109-ton brig Trave!!er and a freedom before their m arriage, Paul C uffe was the seventh of ten black crew on an explorato ry trading visit to Sierra Leone, with children. Raised on the islands of Cuttyhunk and Martha's Vine- an unexpected leg to England to meet wi th leading Q uaker aboyard, the teenage Paul naturally turned to the sea for employment litionists eager for his help. when his father died in 1772. He first shipped aboard a local Paul C uffe's lifelong adherence to Quaker principles made whaleship and later profited from ferrying supplies to Nantucket him especially receptive to appeals from that quarter. He had past the British naval blockade. been raised to follow the Friends' religion, despite being denied From the start, Paul Cuffe's business decisions were heavily full membership into the local Quaker m eeting until the wininfluenced by his racial identity and family ties. H e deliberately ter of 1808 when he was accepted into the Westport meeting of avoided taking on any white ship-owning partners until 1801, Friends. Quaker practices and beliefs appear in Paul C uffe's letters when building his fourth vessel, the 162-ton brig Hero. His first in both subtle and obvious ways. Cuffe often closed his letters 12