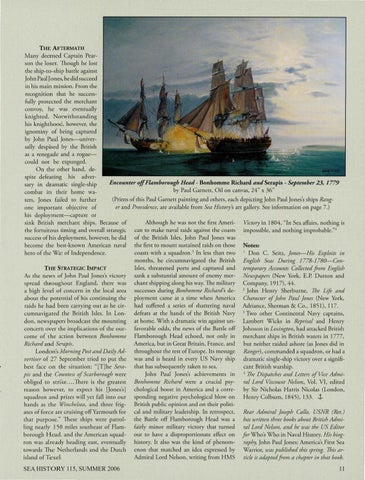 Many deemed Captain Pearson the loser. Though he lost the ship-to-ship battle against John Paul Jones, he did succeed in his main mission. From the recognition that he successfully protected the merchant convoy, he was eventually knighted. Notwithstanding his knighthood, however, the ignominy of being captured by John Paul Jones-universally despised by the British as a renegade and a roguecould not be expunged. On the ocher hand, despite defeating his adverEncounter offFlamborough Head - Bonhomme Richard and Serapis - September 23, 1779 sary in dramatic single-ship by Paul Garnett, Oil on canvas, 24" x 36" combat in their home wa(Prints of this Paul Garnett painting and others, each depicting John Paul Jones's ships Rangters, Jones failed to further er and Providence, are available from Sea History's art gallery. See information on page 7.) one important objective of his deployment-capture or Although he was not the first Ameri- Victory in 1804, "In Sea affairs, nothing is sink British merchant ships. Because of the fortuitous timing and overall strategic can to make naval raids against the coasts impossible, and nothing improbable."4 success of his deployment, however, he did of the British Isles, John Paul Jones was become the best-known American naval the first to mount sustained raids on those Notes: coasts with a squadron. 3 In less than two 1 Don C. Seitz, Jones-His Exploits in hero of the War of Independence. months, he circumnavigated the British English Seas During 1778-1780-ConIsles, threatened pons and captured and tempormy Accounts Collected from English THE STRATEGIC IMPACT As rhe news of John Paul Jones's victory sank a substantial amount of enemy mer- Newspapers (New York, E.P. Dutton and spread throughout England, there was chant shipping along his way. The military Company, 1917), 44. a high level of concern in rhe local area successes during Bonhomme Richard's de- 2 John Henry Sherburne, The Life and about rhe potential of his continuing the ployment came at a time when America Character of john Paul Jones (New York, raids he had been carrying our as he cir- had suffered a series of shattering naval Adriance, Sherman & Co., 1851), 117. cumnavigated the British Isles. In Lon- defeats at the hands of the British Navy 3 Two other Continental Navy captains, don, newspapers broadcast the mounting at home. With a dramatic win against un- Lambert Wicks in Reprisal and Henry concern over rhe implications of rhe out- favorable odds, rhe news of the Battle off Johnson in Lexington, had attacked British come of the action between Bonhomme Flamborough Head echoed, not only in merchant ships in British waters in 1777, America, but in Great Britain, France, and but neither raided ashore (as Jones did in Richard and Serapis. London's Morning Post and Daily Ad- throughout the rest of Europe. Its message Ranger), commanded a squadron, or had a dramatic single-ship victory over a signifivertiser of 27 September tried to put the was and is heard in every US Navy ship cant British warship. best face on the situation: "[T]he Sera- that has subsequently taken to sea. pis and the Countess of Scarborough were John Paul Jones's achievements in 4 The Dispatches and Letters of Vice Admiobliged to strike .... There is the greatest Bonhomme Richard were a crucial psyral Lord Viscount Nelson, Vol. VI, edited reason however, to expect his [Jones's] chological boost in America and a correby Sir Nicholas Harris Nicolas (London, squadron and prizes will yer fall into our sponding negative psychological blow on Henry Colburn, 1845), 133. ,!, hands as the Winchelsea, and three frigBritish public opinion and on their politiates of force are cruising offYarmouth for cal and military leadership. In retrospect, Rear Admiral Joseph Caffo, USNR (Ret.) that purpose." These ships were patrol- the Battle off Flamborough Head was a has written three books about British Admiling nearly 150 miles so utheast of Flam- fairly minor military victory that turned ral Lord Nelson, and he was the US Editor borough Head, and the American squad- out to have a disproportionate effect on for Who's Who in Naval History. H is biogron was al ready heading east, eventually history. It also was the kind of phenomraphy, John Paul Jones: America's First Sea towards The Netherlands and the Dutch enon that matched an idea expressed by Warrior, was published this spring. This arAdmiral Lord Nelson, writing from HMS island ofTexel. ticle is adapted from a chapter in that book. SEAHISTORY 115, SUMMER2006