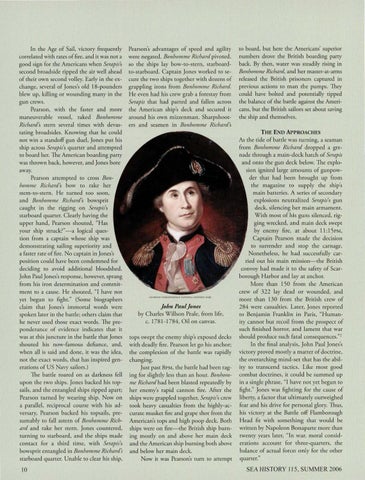 In the Age of Sail, victory frequently correlated with rates of fire, and it was not a good sign for the Americans when Serapis's second broadside ripped the air well ahead of their own second volley. Early in the exchange, several of Jones's old 18-pounders blew up, killing or wounding many in the gun crews. Pearson, with the faster and more maneuverable vessel, raked Bonhomme Richard's stern several times with devastating broadsides. Knowing that he could not win a standoff gun duel, Jones put his ship across Serapis's quarter and attempted to board her. The American boarding party was thrown back, however, and Jones bore away. Pearson attempted to cross Bonhomme Richard's bow to rake her stem-to-stern. He turned too soon, and Bonhomme Richard's bowsprit caught in the rigging on Serapis's starboard quarter. Clearly having the upper hand, Pearson shouted, "Has your ship struck?"-a logical question from a captain whose ship was demonstrating sailing superiority and a faster rate of fire. No captain in Jones's position could have been condemned for deciding to avoid additional bloodshed. John Paul Jones's response, however, sprang from his iron determination and commitment to a cause. He shouted, "I have not yet begun to fight." (Some biographers claim that Jones's immortal words were spoken later in the battle; others claim that he never used those exact words. The prepon<lerance of evidence indicates that it was at this juncture in the battle that Jones shouted his now-famous defiance, and, when all is said and done, it was the idea, not the exact words, that has inspired generations of US Navy sailors.) The battle roared on as darkness fell upon the two ships. Jones backed his topsails, and the entangled ships ripped apart; Pearson turned by wearing ship. Now on a parallel, reciprocal course with his adversary, Pearson backed his topsails, presumably to fall astern of Bonhomme Richard and rake her stern. Jones countered, turning to starboard, and the ships made contact for a third time, with Serapis's bowsprit entangled in Bonhomme Richard's starqoard quarter. Unable to clear his ship, 10

Pearson's advantages of speed and agility were negated. Bonhomme Richard pivoted, so the ships lay bow-to-stern, starboardto-starboard. Captain Jones worked to secure the two ships together with dozens of grappling irons from Bonhomme Richard. He even had his crew grab a forestay from Serapis that had parted and fallen across the American ship's deck and secured it around his own mizzenmast. Sharpshooters and seamen in Bonhomme Richard's

to board, but here the Americans' superior numbers drove the British boarding party back. By tl1en, water was steadily rising in Bonhomme Richard, and her master-at-arms released the British prisoners captured in previous actions to man the pumps. They could have bolted and potentially tipped the balance of tl1e battle against the Americans, but the British sailors set about saving the ship and themselves. THE END APPROACHES

As the tide of battle was turning, a seaman from Bonhomme Richard dropped a grenade through a main-deck hatch of Serapis

John Paul Jones by Charles Willson Peale, from life, c. 1781-1784, Oil on canvas. tops swept the enemy ship's exposed decks with deadly fire. Pearson let go his anchor; the complexion of the battle was rapidly changing. Just past 8PM, the battle had been raging for slightly less than an hour. Bonhomme Richard had been blasted repeatedly by her enemy's rapid cannon fire. After the ships were grappled together, Serapis's crew took heavy casualties from the highly-accurate musket fire and grape shot from the American's tops and high poop deck. Both ships were on fire-the British ship burning mostly on and above her main deck and the American ship burning both above and below her main deck. Now it was Pearson's rum to attempt

and onto the gun deck below. The explosion ignited large amounts of gunpowder that had been brought up from the magazine to supply the ship's main batteries. A series of secondary explosions neutralized Serapis's gun deck, silencing her main armament. With most of his guns silenced, rigging wrecked, and main deck swept by enemy fire, at about 11: l 5PM, Captain Pearson made the decision to surrender and stop the carnage. Nonetheless, he had successfully carried out his main mission-the British convoy had made it to the safety of Scarborough Harbor and lay at anchor. More than 150 from the American crew of 322 lay dead or wounded, and more than 130 from the British crew of 284 were casualties. Later, Jones reported to Benjamin Franklin in Paris, "Humanity cannot but recoil from the prospect of such finished horror, and !amen t that war should produce such fatal consequences." 2 In the final analysis, John Paul Jones's victory proved mostly a matter of doctrine, the overarching mind-set that has the ability to transcend tactics. Like most good combat doctrines, it could be summed up in a single phrase, "I have not yet begun to fight." Jones was fighting for the cause of liberty, a factor that ultimately outweighed fear and his drive for personal glory. Thus, his victory at the Barde off Flamborough Head fit with something that would be written by Napoleon Bonaparte more than twenty years later, "In war, moral considerations account for three-quarters, the balance of actual force; only for the other quarter."