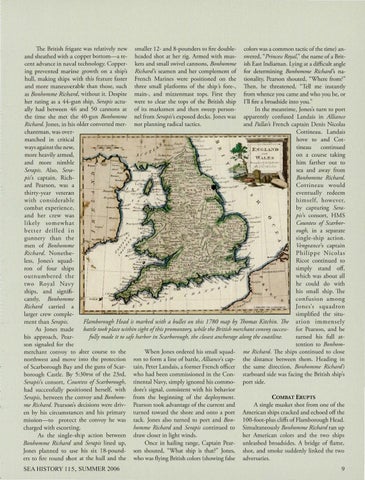 The British frilgate was relatively new and sheathed with a copper bottom-a recent advance in naval technology. Coppering prevented marine growth o n a ship&#39;s hull, making ships with this feature faster and more maneuverable than those, such as Bonhomme Richard, without it. Despite her rating as a 44-gun ship, Serapis actually had berween 46 and 50 cannons at the time she met the 40-gun Bonhomme Richard. Jones, in his older converted merchantman, was overmatched in critical ways against the new, more heavily armed, and more nimble

smaller 12- and 8-pounders to fire doubleheaded shot at her rig. Armed with muskets and small swivel cannons, Bonhomme Richard&#39;s seamen and her complement of French Marines were positioned on the three small platforms of the ship&#39;s fore-, main-, and mizzenmast tops. First they were to clear the tops of the British ship of its marksmen and then sweep personnel from Serapis&#39;s exposed decks. Jones was not planning radical tactics.

colors was a common tactic of the time) answered, &quot;Princess Royal,&quot; the name of a British East Indiaman. Lying at a difficult angle for determining Bonhomme Richard&#39;s nationality, Pearson shouted, &quot;Where from?&quot; Then, he threatened, &quot;Tell me instantly from whence you came and who you be, or I&#39;ll fire a broadside into you.&quot; In the meantime, Jones&#39;s turn to port apparently confused Landais in Alliance and Pallas&#39;s French captain Denis Nicolas Cottineau. Landais hove to and Cottineau continued on a course taking him farther our to sea and away from

Cott in eau wou ld ard Pearson, was a thirty-year veteran eventually redeem with considerab le himself, however, by capturing Seracombat experience, pis&#39;s consort, HMS and her crew was 0 likely somewhat Countess of Scarborbetter drilled in ough, in a separate single-ship action. gunnery than the Vengeance&#39;s captain men of Bonhomme Richard. NonethePhilippe Nicolas Ricot continued to less, Jones&#39;s squadsimply stand off, ron of four ships which was about all outnumbered the he could do with two Royal Navy &#39;1 his small ship. 1he ships, and signifi:J&#39;r~, 1~ confusion among cantly, Bonhomme tJ...,?-s (&#39; I~ Jff ::t&#39;$&gt;&#39;&quot; LIBRARY OF CO NG RESS Jones&#39;s squadron Richard carried a , &gt;--simplified the sitularger crew compleFlamborough Head is marked with a bullet on this 1780 map by Thomas Kitchin. The ation immensely ment than Serapis. battle took place within sight ofthis promontory, while the British merchant convoy success- for Pearson, and he As Jones made fully made it to safe harbor in Scarborough, the closest anchorage along the coastline. turned his full athis approach, Peartention to Bonhomson signaled for the merchant convoy ro alter course to the When Jones ordered his small squad- me Richard. The ships continued to close northwest and move into the protection ron to form a line of battle, Alliance&#39;s cap- the distance berween them. Heading in of Scarborough Bay and the guns of Scar- tain, Peter Landais, a former French officer the same direction, Bonhomme Richard&#39;s borough Castle. By 5:30PM of the 23rd, who had been commissioned in the Con- starboard side was facing the British ship&#39;s Serapis&#39;s consort, Countess of Scarborough, tinental Navy, simply ignored his commo- port side. had successfully positioned herself, with dore&#39;s signal, consistent with his behavior COMBAT ERUPTS Serapis, berween the convoy and Bonhom- from the beginning of the deployment. A single musket shot from one of the me Richard. Pearson&#39;s decisions were driv- Pearson took advantage of the current and en by his circumstances and his primary turned roward the shore and onto a port American ships cracked and echoed off the mission-to protect the convoy he was tack. Jones also turned to port and Bon- 100-foot-plus cliffs ofFlamborough Head. homme Richard and Serapis continued to Simultaneously Bonhomme Richard ran up charged with escorting. As the single-ship action berween draw closer in light winds. her American colors and the rwo ships Bonhomme Richard and Serapis lined up, Once in hailing range, Captain Pear- unleashed broadsides. A bridge of Bame, Jones planned to use his six 18-pound- son shouted, &quot;What ship is that?&quot; Jones, shot, and smoke suddenly linked the rwo ers to fire round shot at the hull and the who was Hying British colors (showing false adversaries.