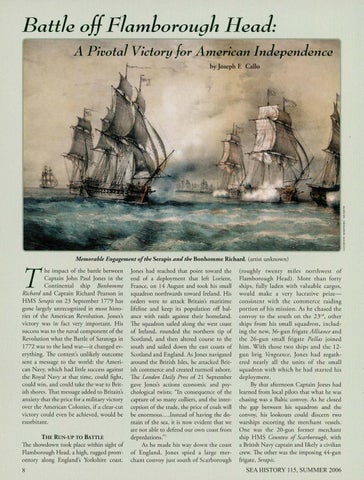 he impact of [he banle between Cap[ain John Paul Jones in the Continental ship Bonhomme Richard and Captain Richard Pearson in HMS Serapis on 23 September 1779 has gone largely unrecognized in most hisrnries of [he American Revolution. Jones&#39;s vicrnry was in fact very important. His success was rn the naval component of [he Revolution what the Battle of Sararnga in 1772 was to the land war-it changed everything. The contest&#39;s unlikely outcome sent a message ro the world: [he American Navy, which had little success against [he Royal Navy at tha[ rime, could figh[, could win, and could rake the war to Bri[ish shores. Tua[ message added ro Britain&#39;s anxiety [ha[ [he price for a milirnry victory over the American Colonies, if a clear-cut victory could even be achieved, would be exorbitant. THE RUN-UP TO BATTLE

Jones had reached that point toward the end of a deployment that left Lorient, France, on 14 August and rook his small squadron northwards toward Ireland. His orders were to attack Britain&#39;s maritime lifeline and keep its population off balance with raids against their homeland. The squadron sailed along the west coast of Ireland, rounded the northern tip of Scotland, and then altered course ro the south and sailed down the east coasts of Scotland and England. As Jones navigated around the British Isles, he attacked British commerce and created turmoil asho re. The London Daily Press of 21 September gave Jones&#39;s actions economic and psychological twists: &quot;In consequence of the capture of so many colliers, and the intercep[ion of [he uade, [he price of coals will be enormous ... .Ins[ead of having the domain of the sea, it is now evident that we are not able ro defend our own coast from depredations.&quot; 1 As he made hi s way down the coast of England, Jones spied a large merchant convoy just south of Scarborough

(roughly twenty miles nor[hwest of Flamboro ugh Head). More than forty ships, fully laden with valuable cargos, would make a very lucrative prizeconsis[ent with the commerce raiding portion of his mission. As h e chased the convoy to the so uth on the 23rd, other ships from his small squadron, including the new, 36-gun frigate ALiiance and the 26-gu n small friga[e Pallas joined him . With those two ships and the 12gun brig Vengeance, Jones h ad regathered nearly all [he uni[s of the small squadron with which he had started his deployment. By that afternoon Captain Jones had learned from local pilots [ha[ what he was chasing was a Baltic convoy. As he closed [he gap between his squadron and the convoy, his lookours could discern two warships escorting the merchant vessels. One was the 20-gun former merchant ship HMS Countess of Scarborough, with a Brirish Navy captain and likely a civilian crew. The other was the imposing 44-gun frigate, Serapis. SEA HISTORY 115 , SUMMER 2006