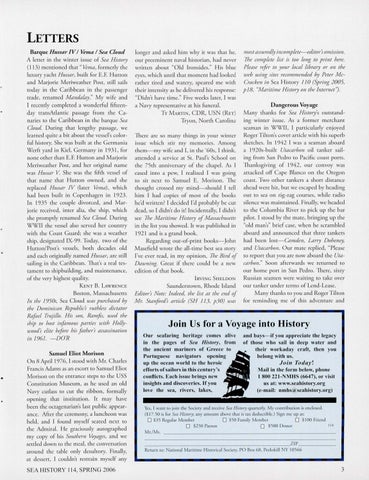 LETTERS Barque Hussar IV I Verna I Sea Cloud A letter in the winter issue of Sea History (11 3) mentioned that " Vema, fo rmerly the luxury yacht H ussar, built fo r E.F. Hutto n and M arjorie Meriwea ther Post, still sails today in the Caribbean in the passe nge r trade, renam ed Mandalay." My wife and I recently completed a wo nderful fiftee nday rransAdanti c passage fro m the Canaries to the Caribbean in the barq ue Sea Cloud. During that lengthy passage, we learned quite a bit about the vessel's co lorful history. She was built at the Germania Werft yard in Kiel, Germany in 193 1, for none other than E.F. Hutto n and Marjo rie Meriwea th er Post, and her o ri ginal name was H ussar V She was the fift h vessel of that nam e that Hutto n owned , and she replaced Hussar IV (late r Vema), whi ch had been built in Copenhage n in 1923. In 1935 the couple d ivorced, and Ma rjorie received, inter alia, the shi p, which she promptly renam ed Sea Cloud. D uring WWII the vessel also served her coun try with the Coast G uard; she was a wea ther ship, designated IX-99 . Today, two of the Hutton/Post's vessels, bo th decades old and each ori ginall y nam ed Hussar, are still sailing in the Caribbea n. Th ar's a real testam ent to shipbuilding, and maintenance, of th e very highest quali ty. KENT B. LAWRENCE Bos ton , Massachusetts In the 1950s, Sea C loud was purchased by the Dominican Republic's ruthless dictator Rafael Trujillo. H is son, Ramjis, used the ship to host infamous parties with Hollywood's elite before his father's assassination in 1961. -DO'R Samuel Eliot Morison O n 8 Ap ril 1976, I stood with Mr. C harles Francis Ada ms as an escort to Samuel Eliot Mo rison on the entrance steps to the USS Co nstitutio n Museum, as he used an old Navy cutl ass to cut the ri bbo n, fo rmally opening that institutio n. Ir may have been the octagenari an's las t public appearance. After the ceremo ny, a luncheon was held, and I fo und myself seated next to the Admi ral. H e graciously autographed my co py of his Southern Voyages, and we settled down to the meal, the co nversation aro und the table o nl y desultory. Finally, at dessert, I couldn't restrain myself any SEA HTSTORY I I 4, SPRJNG 2006

lo nger and asked hi m why it was that he, o ur preeminent naval historian, had never writte n about "O ld Iro nsides." His blue eyes, which until that mo ment had looked rather tired and wa tery, speared me wi th their intensity as he delive red his res ponse: "Didn't have time." Five weeks later, I was a Navy representati ve at his fun eral. TY MARTIN, C DR, USN (RET) Tryo n, No rth Carol ina There are so many thin gs in yo ur winter issue which stir my m em ories. Am o ng them-m y wife and I, in the '60s, I think, attended a service at Sr. Paul's School on the 75 th anniversary of the chapel. As I eased in to a pew, I realized I was going to sit nex t to Sam uel E. Moriso n. The tho ught crossed my mi nd-should I tell him I had copies of mos t of the books he'd written? I decided I'd probably be cut dead, so I didn't do it! Incidentally, I didn't see The Maritime H istory of Massachusetts in the list yo u showed . It was published in 192 1 and is a grand book. Regarding out-of-print books-John Masefield wrote the all-time best sea story I've ever read , in my opinio n, The Bird of Dawning. G reat if there could be a new editio n of that book. IRVING SHELDON Saunderstown , Rhod e Island Editor's Note: Indeed, the List at the end of Mr. Stanford's article (SH 113, p30) was

most assuredly incomplete-editor's omission. The complete list is too Long to print here. Please refer to your Local library or on the web using sites recommended by Peter McCracken in Sea History 110 (Spring 2 005, p l 8, "Maritime H istory on the Internet").

Dangerous Voyage M any thanks fo r Sea H istory's o utstanding winter issue. As a fo rmer merchant seaman in WWII, I particularl y enjoyed Roger Tilton's cover articl e with his superb sketches. In 1942 I was a seaman aboard a 1920s-built Utacarbon o il tanker sailing fro m Sa n Ped ro to Pacifi c coast po rts. Thanksgiving of 1942, our co nvoy was attacked off Cape Blanco o n the O regon coast. Two o ther tankers a sho rt distance al1ead we re hi t, bur we escaped by headin g o m to sea o n zig-zag co urses, while radi o silence was maintained . Finall y, we headed to the Columbia River to pick up the bar pilot. I stood by the mate, b rin ging up the "old man's" brief case, when he scrambled aboa rd and anno unced that three tankers had been lost-Camden, Larry Doheney, and Utacarbon. O ur mate repli ed, "Please to re port that yo u are now aboa rd the Utacarbon." Soon afterwards we returned to o ur ho me po rt in Sa n Pedro . There, sixty Russian seamen we re waitin g to take over our tanker under terms of Lend-Lease. Many thanks to yo u and Roger T il to n for reminding me of this adve nture and

Join Us for a Voyage into History Our seafaring heritage comes alive in the pages of Sea History, from the ancient mariners of Greece to Portuguese navigators opening up the ocean world to the heroic efforts of sailors in this century's conflicts. Each issue brings new insights and discoveries. 1f you love the sea, rivers, lakes,

and bays-if you appreciate the legacy of those who sail in deep water and their workaday craft, then you belong with us. Join Today! Mail in the form below, phone l 800 221-NMHS (6647), or visit us at: www.seahistory.org (e-mail: nmhs@seahistory.org)