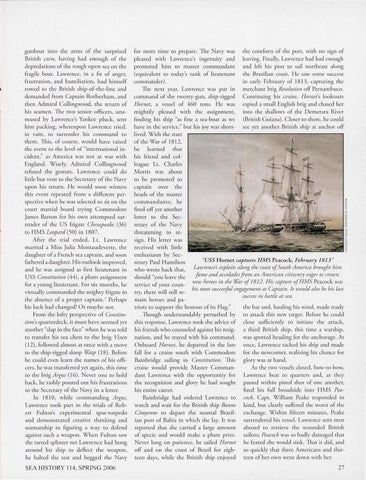 gunboat into the arms of the surprised Bri tish crew, having had enough of the depredations of the rough open sea o n the fragile boat. Lawrence, in a fit of ange r, frustration , and humiliation, h ad himself rowed to the British ship-of- the-line and demanded from Captain Rotherham, and then Admiral Collingwood, the return of his seamen. The two senior o ffi cers, un amused by Lawrence's Yankee pluck, sem him packing, whereupon Lawre nce tried, in va in , to surrender his command to them. This, of course, would have raised the evem to the level of "imernatio nal incidem ," as Am erica was not at war with England. Wisely, Admiral Collingwood refu sed the gesture. Law rence could do little but vent to the Secretary of the Navy upo n his return. H e would soo n witn ess this event repeated from a different perspecti ve when he was selected to sit o n the court martial boa rd trying Co mmodo re James Barron for his own attempted surrender of the US fri gate Chesapeake (36) ro HMS Leopard (50) in 1807 . After the trial ended , Lt. Lawrence marri ed a Miss Juli a Mo nta udeverte, the daughter of a French sea captain , and soo n fa thered a daughter. His o utlook imp roved, and he was assigned as first lieutenant in USS Constitution (44), a plum ass ignment for a yo ung lieutenant. For six m onths, he virtually commanded the migh ty fri gate in the absence of a proper capra in. 1 Perhaps his luck had changed! Or maybe no t. From the lofty perspecti ve o f Constitution's quarterd eck, it must have seemed ye t ano th er "slap in the face" when he was told to transfer his sea chest to th e brig Vixen (12), fo llowed almost at o nce w ith a move to th e ship- ri gged sloop Wasp (18). Befo re he could even learn the nam es of his o ffi cers, he was transferred yet again , this time to the brig Argus (1 6). Never o ne to hold back, he rashly po ured out his frustratio ns to th e Secretary of the Navy in a letter. In 18 10, while comma ndi ng Argus, Lawrence took part in the tri als of Robert Ful to n's experimental spa r-to rpedo and demo nstrated creative thin king and seamanship in fi guring a way to defend against such a weapon . Whe n F ul to n saw the tarred splinter net Lawrence had hung aro und his ship to deflect the weapon, he halted rhe test and begged the Navy S EA HISTORY 114, SPRING 2006

for more time to prepare. The N avy was the co mfo rrs of the po rt, with no sign of pleased with Law rence's in genuity and leav ing. Fin all y, Lawrence had had eno ugh promoted him to mas ter co mmandant and left his post to sa il north eas t along (equivalent to today's rank of lieutenant the Brazilian coas t. H e saw some success commander). in early February of 18 13, capturing rhe Th e next year, Lawrence was put in merchant bri g Resolution off Pernambuco. command of th e twenty-gun , ship-ri gged Co ntinuing his cruise, Ho rnets lookouts H ornet, a vessel of 460 tons. H e was es pi ed a small English brig and chased her mi ghtily pleased with the assignment, in to the shallows of the D em erara Ri ver findin g his ship "as fin e a sea-boa r as we (British G uiana). Closer to shore, he could have in the service," but his joy was short- see yet ano ther British ship at ancho r off lived. With the start of the War of 18 12, he learned that his fri end and colleague Lr. C harles Mo rris was abo ut to be promo ted to captain over rhe heads of the maste r co mmanda nts; he fired off ye t ano ther letter to rhe Secretary of the N avy threatening to resign. His letter was received with littl e enthusias m by Sec"USS Hornet captures HMS Peacock, February 1813" retary Paul H amilton who wrote back that, Lawrence's exploits along the coast ofSouth America brought him fame and accolades from an American citizenry eager to crown sho uld "you leave the new heroes in the War of 18 12. H is capture of HMS Peacock was service of your counhis most successful engagement as Captain. It would also be his last try, th ere will still resuccess in battle at sea. main heroes and patriots to support the honour of its Flag." the bar and , hauling his wind, made ready Though understandably perturbed by to attack this new target. Before he could this respon se, Lawrence took rhe advice of close sufficiently to initiate the attack, his fri ends who counseled against his resig- a third Briti sh ship, this rim e a wars hip, nation , and he stayed with his command. was spotted headin g for the anchorage. At Onboard Ho rnet, he departed in rhe !are once, Law rence tacked his ship and made fa ll for a cruise south with Commodore for rhe newcomer, realizing his chance fo r Bainbridge sailing in Constitution. This glory was at hand . cruise would provide Master C ommanAs the two vessels closed, bow-to-bow, dant Lawrence w ith the oppo rtunity for Lawrence beat to quarters and , as rhey the recognition and glory he had sought passed within pistol shot of o ne another, fired hi s full broadside into HMS Peahis entire career. Bainbridge had ordered Lawrence to cock. Capt. William Peake res po nded in watch and wait for the British ship Bonne kind, bur clearly suffered the wo rst of the Citoyenne to depart the neutral Brazil- exchange. Within fifteen minu tes, Peake ian port of Bahia in which she lay. It was surrendered his vessel. Lawrence sent men reported that she carried a large amount aboard to retrieve the wo unded British of specie and wo uld make a plum prize. sailors; Peacock was so badly damaged rhat Never long on patience, he sailed Ho rnet he feared she would sink. That it did , and off and on the coast of Braz il for eigh- so qui ckl y th at three Americans and thirteen days, while the British ship enjoyed teen of her own went down with her.