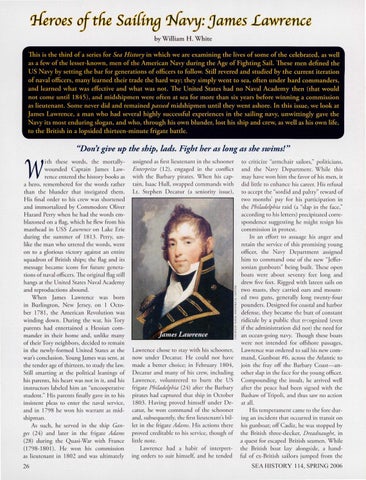 of the Saifing &#39;lfavy: james Lawrence by William H. White

Âˇlhis is the third of a series h&gt;r Sct1 Histo1y in which we are examining the lives of some of the celebrated, as well as a fe&quot; of the lesser-known, men of the American Na\). during the Age of Fighting Sail. &#39;lhese men defined the US Nav~ b~ setting the bar for generations of officers to follow. Still revered and studied by the current iteration of n&lt;n-al officers, many learned their trade the hard way; they simply went to sea, often under hard commanders, and learned what \\as effecti\Âˇe and what was not. lhe United States had no Naval Academy then (that would not come until 18,Vi ). and midshipmen were often at sea for more than six years before winning a commission as lieutenant. Some never did and remained p11sscrl midshipmen until they went ashore. In this issue, we look at James Lawrence, a man who had several highly successful experiences in the sailing navy, unwittingly gave the N&lt;ny its most enduring slogan, and who , through his own blunder, lost his ship and crew, as well as his own life, to the British in a lopsided thirteen-minute frigate battle.

i rh rhese words, rhe mortallywounded Captain James Lawrence enrered rhe history books as a hero, remembered for rhe words rather rhan the blunder rhar insrigared them. His final order to his crew was shortened and immortalized by Commodore Oliver Hazard Perry when he had rhe words emblazoned on a Aag, which he Aew from his masthead in USS Lawrence on Lake Erie during rhe summer of 181 3. Perry, unlike rhe man who urrered rhe words, wenr on to a glo rious victory against an enrire squadron of British ships; rhe flag and irs message became icons for furure generations of naval officers. The original Aag srill hangs ar the Uni red Srares Naval Academy and reproductions abound. When James Lawrence was born in Burlington, New Jersey, on 1 October 178 1, rhe American Revolution was winding down. During rhe war, his Tory parenrs had enrertained a Hessian commander in their home and, unlike many of their Tory neighbors, decided to remain in rh e newly-for med Unired Srares ar the war&#39;s conclusion. Young James was senr, ar rhe render age of thirteen, to srud y the law. Sri ll smarting ar rhe political leanings of his parents, his heart was nor in ir, and his instructors labeled him an &quot;un cooperative srudenr.&quot; His parenrs finally gave in to his insisrenr pleas to enrer rhe naval service, and in 1798 he wo n his warranr as midshipman . As such, he served in rhe sh ip Ganges (24) and larer in rhe frigare Adams (28) during rhe Quasi-War wirh France (1798-1801). He won his com mission as lieurenanr in 1802 and was ulrimarely

Lawrence chose to stay wirh his schooner, now under Decarur. He cou ld nor have made a better choice; in February 1804, Decarur and many of his crew, including Lawrence, volunteered to burn rhe US frigate Philadelphia (24) afrer rhe Barbary pirates had captured rhar ship in October 1803. Having proved himself under Decatur, he won command of rhe schooner and , subsequentl y, rhe first lieurenanr&#39;s biller in rhe frigate Adams. His actions rhere proved creditable to his service, rhough of li rrle no re. Lawrence had a habir of inrerprering orders to suit himself, and he tended

to criticize &quot;armchair sailors,&quot; po li ticians, and rhe Navy Deparrmenr. Whi le rhis may have won him the favor of his men, ir did lirrle to enhance his career. His refusal to accept rhe &quot;sordid and paltry&#39;&#39; reward of rwo monrhs&#39; pay for his parti cipation in the Philadelphia raid (a &quot;slap in the face,&quot; accordin g to his lerrers) precipitated correspo ndence suggesting he might resign his commission in protest. In an effort to ass uage his anger and rerain the service of this promising yo ung officer, the Navy Deparrmenr ass igned him to command one of the new &quot;Jefferso ni an gunboats&quot; being builr. These open boats were about seventy feet long and drew five feer. Rigged with latee n sai ls on rwo masts, they carried oars and mounred rwo guns, ge nerally long rwenty-four pounders. Design ed fo r coastal and harbor defense, they became the butt of constanr ridicule by a public that recognized (even if the administration did not) the need for an ocean-going navy. Though these boats were nor inrended for offshore passages, Lawrence was ordered to sail his new command, Gunboat #6, across the Arlanric to join the fray off the Barbary Coast-another slap in rhe face for the yo ung officer. Compounding the ins ul t, he arrived wel l afrer the peace had bee n signed wir h rhe Bashaw of Tripoli, and thus saw no action at all. His temperame nt came to the fore during an incident thar occurred in transit on his gun boat; off Cad iz, he was sto pped by d1e British rhree-decker, Dreadnaught, in a quesr for escaped British seamen. While rhe British boar lay alongside, a handfu l of ex-B ritish sai lors jumped from rhe