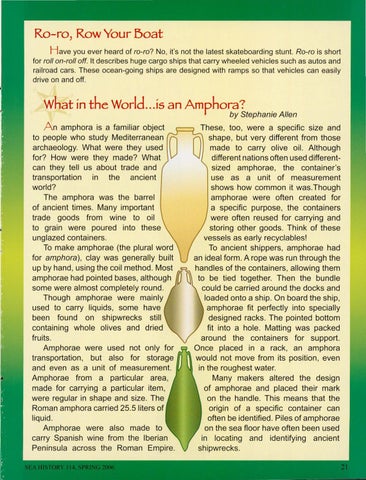 Ro-ro, Row Your 5oat H ave you ever heard of ro-ro? No, it's not the latest skateboarding stunt. Ro-ro is short for roll on-roll off. It describes huge cargo ships that carry wheeled vehicles such as autos and railroad cars. These ocean-going ships are designed with ramps so that vehicles can easily drive on and off.

What in the World .. .is an Amphora? by Stephanie Allen

A n amphora is a familiar object to people who study Mediterranean archaeology. What were they used for? How were they made? What can they tell us about trade and transportation in the ancient world? The amphora was the barrel of ancient times. Many important trade goods from wine to oil to grain were poured into these unglazed containers. To make amphorae (the plural word for amphora), clay was generally built up by hand, using the coil method. Most amphorae had pointed bases, although D ~ some were almost completely round. Though amphorae were mainly used to carry liquids, some have been found on shipwrecks still containing whole olives and dried fruits . Amphorae were used not only for transportation , but also for storage rn and even as a unit of measurement. V Amphorae from a particular area, made for carrying a particular item , were regular in shape and size. The Roman amphora carried 25 .5 liters of liquid. Amphorae were also made to carry Spanish wine from the Iberian Peninsula across the Roman Empire.

These , too , were a specific size and shape, but very different from those made to carry olive oil. Although different nations often used differentsized amphorae , the container's use as a unit of measurement shows how common it was.Though amphorae were often created for a specific purpose, the containers were often reused for carrying and storing other goods. Think of these vessels as early recyclables! To ancient shippers, amphorae had an ideal form. A rope was run through the handles of the containers , allowing them to be tied together. Then the bundle could be carried around the docks and loaded onto a ship. On board the ship, amphorae fit perfectly into specially designed racks. The pointed bottom fit into a hole. Matting was packed around the containers for support. Once placed in a rack, an amphora would not move from its position , even in the roughest water. Many makers altered the design of amphorae and placed their mark on the handle. This means that the origin of a specific container can often be identified. Piles of amphorae on the sea floor have often been used in locating and identifying ancient shipwrecks.