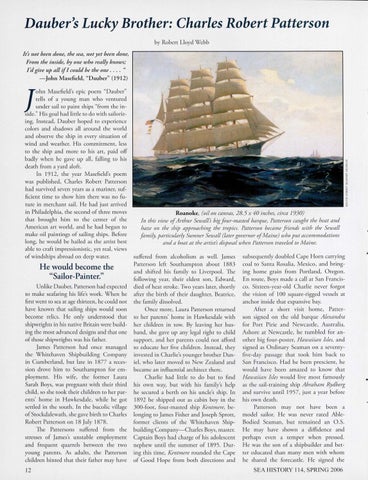 Dauber's Lucky Brother: Charles Robert Patterson by Ro bert Lloyd Webb It's not been done, the sea, not yet been done, From the inside, by one who really knows; I'd give up all ifI could be the one . . . . " -John M asefield, "Dauber" (1912) o hn Masefield's epic poem "D auber" tells of a yo ung man who vemured under sail to paint ships "from the inside." H is goal had little to do with sailorizing. Ins tead, D auber hoped to experience colo rs and shadows all around the world and observe the ship in every situation of wind and weather. His commitmem , less to the ship and m ore to his art, paid off badly when he gave up all, fallin g to his death from a yard aloft. In 1912, the year M asefield's poem was published, Charles Robert Patterson had survived seven years a~ a m ariner, sufficiem time to show him th ere was no future in mercham sail. H e had just arrived in Philadelphia, the second of three m oves that brought him to the center of the American art world, and he had begun to make oil paintings of sailing ships. Before long, he would be hailed as the artist best able to craft impressionistic, ye t real, views of windships abroad o n deep wa ter.

He would become the "Sailor-Painter." Unlike D auber, Patterson had expected to make seafaring his life's wo rk. W hen he first went to sea at age thirteen, he could not have known that sailing ships wo uld soon become relics. H e o nly understood that shipwrights in his native Britain we re building the m ost advanced designs and that one of those shipwri gh ts was his fa ther. James Patterso n had o nce m anaged the Whitehaven Shipbuilding Company in C umberland, but late in 1877 a recession drove him to Southamp to n fo r employm ent. His wife, the fo rmer Laura Sarah Boys, was pregnant with their third child, so she too k their child ren to her parents' ho me in H awkesdale, while he go t settled in the so uth . In the bucolic village of Stockdalewath, she gave birth to Charles Robert Patterson on 18 Jul y 1878. The Patterso ns suffe red fro m the stresses of James's unstable employment and frequent quarrels between the two young parents. As adults, the Patterson children hinted that their fat her may have

Roanoke, (oil on canvas, 28.5 x 40 inches, circa 1930) In this view ofArthur Sewall's big four-masted barque, Patterson caught the heat and haze on the ship approaching the tropics. Patterson became friends with the Sewall family, particularly Sumner Sewall (later governor ofMaine) who put accommodations and a boat at the artist's disposal when Patterson traveled to Maine. suffered from alcoholism as well. Jam es Patterson left So uthampton about 1883 and shifted his family to Liverpool. The fo llowing year, their eldest son , Edwa rd, di ed of heat stroke. Two years later, shortly after the birth of their daughter, Beatrice, the family dissolved . O nce more, Laura Patterson returned to her parents' home in H awkesdale with her children in tow. By leaving her husband, she gave up any legal right to child suppo rt, and her parents could not affo rd to edu cate her five children. Instead, they invested in Charlie's younger brother D aniel, who later moved to New Zealand and became an influential architect there. Charlie had little to do but to find his own way, but with his fa mily's help he secured a berth on his uncl e's ship. In 1892 he shipped out as cabin boy in the 300-foot, four-mas ted ship Kentmere, belonging to James Fisher and Joseph Spro tt, fo rmer cliem s of the W hitehaven Shipbuilding C ompany-Charles Boys, mas ter. C aptain Boys had charge of his adolescent nephew until the summer of 1895. D uring this time, Kentmere rounded th e Cape of Good Hope from both directions and

subsequently do ubled Cape Horn ca rryin g coal to Santa Rosalia, Mex ico, and bringing home grain from Portland, Oregon . En ro ute, Boys made a call at San Fran cisco. Sixteen-year-old Charlie never fo rgo t the vision of 100 square- rigged vessels at anchor inside that expansive bay. Afte r a sho rt visit hom e, Patterso n signed on the old barque Alexandra fo r Po rt Pirie and Newcastle, Australi a. As ho re at Newcastle, he tumbl ed for another big fo ur-pos ter, Hawaiian Isles, and signed as O rdin ary Seaman on a seventyfive-day passage that took him back to Sa n Francisco. H ad he been presciem , he wo uld have been am azed to know that Hawaiian Isles wo uld live most famously as th e sail-training ship A braham Rydberg and survive until 1957, just a year before his own death. Patterson m ay no t have been a m odel sailor. H e was never rated AbleBodied Seam an, but rem ained an O .S. He may have shown a diffidence and perhaps even a temper when pressed . He was the son of a shipbuilder and better educated than m any men with whom he shared the fo recastle. H e signed th e