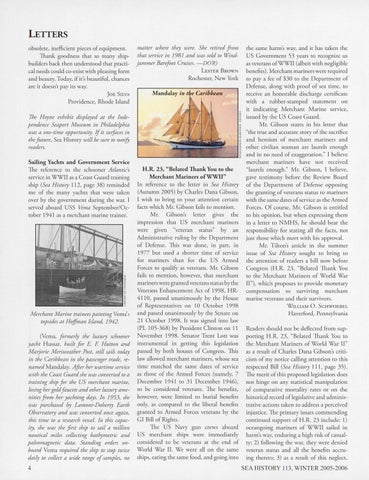 LETTERS obsolete, inefficient pieces of equipmen t. Thank goodness that so m any shipbuilders back then understood that practical needs could co-exist with pleasi ng fo rm and beauty. Today, if it&#39;s beautiful, chances are it doesn&#39;t pay its way.

matter where they were. She retired from that service in 1981 and was sold to Windjammer Barefoot Cruises. -DO&#39;R) LESTER BROWN

The H oyne exhibit displayed at the Independence Seaport Museum in Philadelphia was a one-time opportunity. If it surfaces in the future, Sea History will be sure to notify readers. Sailing Yachts and Government Service The reference to the schoo ner Atlantic&#39;s service in WWII as a Coast G uard training ship (Sea History 11 2, page 38) reminded m e of the m any yach ts that were taken over by the government during the war. I served aboard USS Verna September/O ctober 194 1 as a merchant m arine trainee.

Merchant Marine trainees painting Verna&#39;s topsides at H offman Island, 1942. (Verna, formerly the luxury schooner yacht Hussar, built for E. F H utton and Marjorie Meriweather Post, still sails today in the Caribbean in the passenger trade, renamed Mandalay. After her wartime service with the Coast Guard she was converted to a training ship for the US merchant marine, Losing her gold faucets and other luxury amenities from her yachting days. In 1953, she was purchased by Lamont-D oherty Earth Observatory and was converted once again, this time to a research vessel. In this capacity, she was the first ship to sail a million nautical miles collecting bathymetric and paleomagnetic data. Standing orders onboard Verna required the ship to stop twice daily to collect a wide range of samples, no 4

H.R. 23, &quot;Belated Thank You to the Merchant Mariners ofWWII&quot; In reference to th e letter in Sea H istory (Autumn 200 5) by C harles D ana G ibson, I wish to bring to yo ur attention certain facts which M r. Gibson fa ils to m ention. Mr. Gibson&#39;s letter gives the impressio n that US m erchant mariners were given veteran status by an Administrative rulin g by the D epartm ent of D efense. This was done, in part, in 1977 bu t used a shorter time of service fo r mariners than fo r the US Armed Forces to qualify as veterans. M r. Gibson fails to mention, however, that merchant mariners were granted veterans status by the Veterans Enhancement Act of 1998, HR4 110, passed unanimo usly by the House of Representatives on 10 October 1998 and passed unanimously by the Senate on 21 October 1998 . It was signed into law (PL 105-368) by Pres ident Clinton on 11 N ovember 1998 . Senator Trent Lo tt was instrumental in getting this legislation passed by both houses of Congress. This law allowed merchant m ariners, whose sea time ma tched the same dates of service as those of the Armed Forces (namely, 7 December 194 1 to 3 1 D ecember 1946), to be considered ve terans. The benefits, however, were limited to burial benefits only, as compared to the liberal benefits granted to Armed Forces veterans by the G I Bill of Rights. The US Navy gun crews aboard US merchant ships were immediately considered to be veterans at the end of World War II . We were all on the sam e ships, eating the same fo od, and going into

the sam e harm&#39;s way, and it has taken the US Government 53 years to recognize us as ve terans ofWWII (albeit with negligible benefits) . M erchant m ariners we re required to pay a fee of $30 to the D epartment of D efense, along with proof of sea time, to receive an honorable discharge certificate with a rubber-stamped statement on it indicating M erchant M arine service, issued by the US Coas t G uard. Mr. Gi bson states in his letter that &quot;the true and accurate story of the sacrifice and heroism of merchant m ariners and other civilian seam an are laurels enough and in no need of exaggeration.&quot; I believe merchant mariners have not received &quot;laurels enough.&quot; Mr. G ibson, I believe, gave testimony before the Review Board of the D epartment of D efense opposing the granti ng of veterans status to mariners w ith the sam e dates of service as the Armed Forces . O f co urse, M r. G ibso n is entitled to his opinion , but when expressing them in a letter to NMHS, he sh ould bear the responsibility for stating all the fac ts, not just those which m eet with his approval. Mr. T ilton&#39;s article in the summer issue of Sea History so ugh t to bring to the attention of readers a bill now before Congress (H. R. 23, &quot;Belated Thank You to the Merchant Mariners of World War II&quot;), which proposes to provide m onetary compensation to surviving m erchant marine veterans and their survivors. WILLIAM 0. ScttwoEBEL Haverford, Pennsylvania Readers should no t be deflected from supporting H.R. 23, &quot;Belated Thank Yo u to the M erchant Mariners of World War II&quot; as a result of Charles Dana G ibson&#39;s criticism of my notice calling attention to this respected Bill (Sea History 111 , page 35) . Th e m erit of this pro posed legislation does not hinge o n any statistical m anipulation of co mparative m ortali ty rates or on the historical record ofl egislative and administrative actions taken to address a perceived injustice. The primary issues commending continued support of H.R. 23 include: 1) oceangoing mariners of WWII sailed in harm&#39;s way, enduring a high risk of casualty; 2) fo llowing the war, they were denied ve teran status and all the benefits accruing thereto; 3) as a resul t of this neglect, SEA HISTORY I 13 , WIN TER 2005-2006